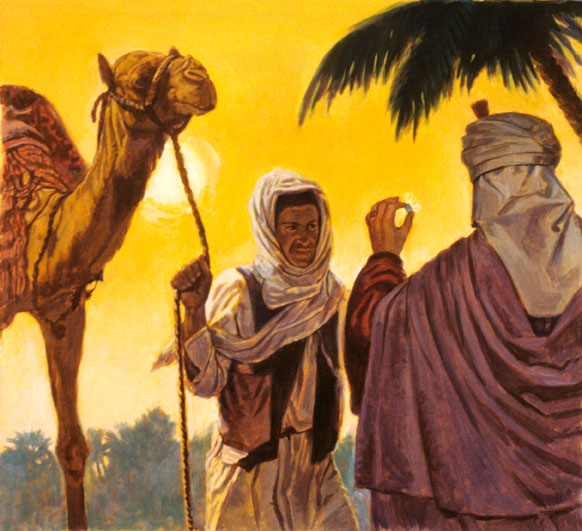 An image by Robert T. Barrett illustrating The Other Wise Man, written in 1895 by Henry van Dyke, published by Harper and Brothers. Van Dyke tells the story of Artaban, a wise man from Persia who, 2,000 years ago, planned to set out with the other three wise men — Caspar, Melchior and Balthasar (link and link) — to find the Christ Child, but was delayed along the way…

Here below is the text of Part #6 of this story, so you may listen to the reading and read along with the text…

We have now posted the 6th in a 10-part series of a reading of the classic Christmas story “The Other Wise Man.” It is available here on YouTube (or by clicking the video below) or on Rumble.

Here is the text of Part #6 of the story of “The Other Wise Man,” by Henry van Dyke:

Part #6: The Other Wise Man

It was already long past midnight. Artaban rode in haste, and Vasda, restored by the brief rest, ran eagerly through the silent plain and swam the channels of the river. She put forth the remnant of her strength, and fled over the ground like a gazelle.

But the first beam of the sun sent her shadow before her as she entered upon the final stadium of the journey, and the eyes of Artaban, anxiously scanning the great mound of Nimrod and the Temple of the Seven Spheres, could discern no trace of his friends.

The many-colored terraces of black and orange and red and yellow and green and blue and white, shattered by the convulsions of nature, and crumbling under the repeated blows of human violence, still glittered like a ruined rainbow in the morning light.

Artaban rode swiftly around the hill. He dismounted and climbed to the highest terrace, looking out towards the west.

The huge desolation of the marshes stretched away to the horizon and the border of the desert. Bitterns stood by the stagnant pools and jackals skulked through the low bushes; but there was no sign of the caravan of the wise men, far or near.

At the edge of the terrace he saw a little cairn of broken bricks, and under them a piece of parchment. He caught it up and read: “We have waited past the midnight, and can delay no longer. We go to find the King. Follow us across the desert.”

Artaban sat down upon the ground and covered his head in despair.

“How can I cross the desert,” said he, “with no food and with a spent horse? I must return to Babylon, sell my sapphire, and buy a train of camels, and provision for the journey. I may never overtake my friends. Only God the merciful knows whether I shall not lose the sight of the King because I tarried to show mercy.”

For the Sake of a Little Child

THERE was a silence in the Hall of Dreams, where I was listening to the story of the Other Wise Man. And through this silence I saw, but very dimly, his figure passing over the dreary undulations of the desert, high upon the back of his camel, rocking steadily onward like a ship over the waves.

The land of death spread its cruel net around him. The stony wastes bore no fruit but briers and thorns. The dark ledges of rock thrust themselves above the surface here and there, like the bones of perished monsters.

Arid and inhospitable mountain ranges rose before him, furrowed with dry channels of ancient torrents, white and ghastly as scars on the face of nature. Shifting hills of treacherous sand were heaped like tombs along the horizon.

By day, the fierce heat pressed its intolerable burden on the quivering air; and no living creature moved on the dumb, swooning earth, but tiny jerboas scuttling through the parched bushes, or lizards vanishing in the clefts of the rock.

By night the jackals prowled and barked in the distance, and the lion made the black ravines echo with his hollow roaring, while a bitter, blighting chill followed the fever of the day. Through heat and cold, the Magian moved steadily onward.

Then I saw the gardens and orchards of Damascus, watered by the streams of Abana and Pharpar, with their sloping swards inlaid with bloom, and their thickets of myrrh and roses.

I saw also the long, snowy ridge of Hermon, and the dark groves of cedars, and the valley of the Jordan, and the blue waters of the Lake of Galilee, and the fertile plain of Esdraelon, and the hills of Ephraim, and the highlands of Judah.

Through all these I followed the figure of Artaban moving steadily onward, until he arrived at Bethlehem.

And it was the third day after the three wise men had come to that place and had found Mary and Joseph, with the young child, Jesus, and had lain their gifts of gold and frankincense and myrrh at his feet.

Then the other wise man drew near, weary, but full of hope, bearing his ruby and his pearl to offer to the King. “For now at last,” he said, “I shall surely find him, though it be alone, and later than my brethren. This is the place of which the Hebrew exile told me that the prophets had spoken, and here I shall behold the rising of the great light. But I must inquire about the visit of my brethren, and to what house the star directed them, and to whom they presented their tribute.”