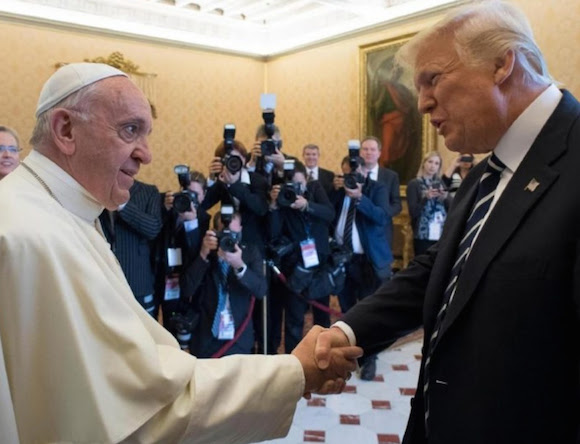 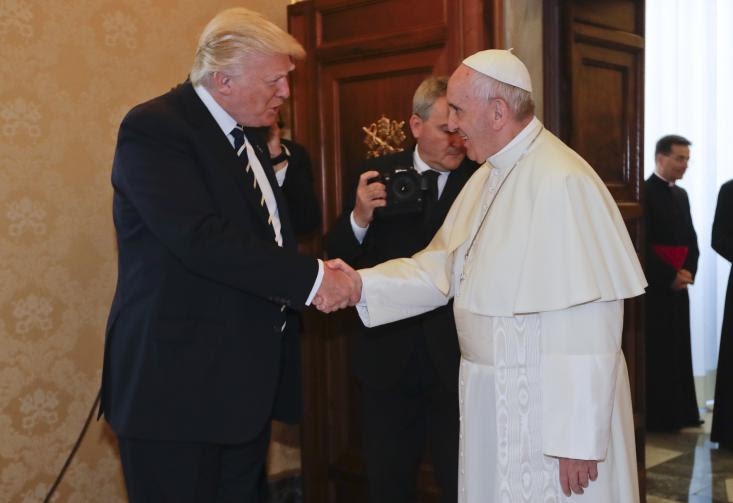 (“I won’t forget what you said,” Trump tells Pope Francis after their private meeting inside the Vatican this morning; AP Photo/Alessandra Tarantino, Pool)

And in between, they talked for 30 minutes with one translator present… 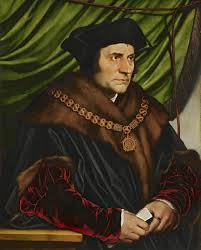 At the end, Francis greeted the president’s wife, Melania, who was dressed soberly in black and wore a black head covering, and the rest of his entourage… 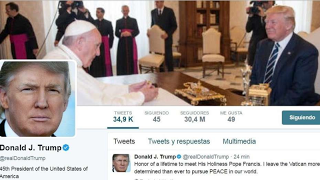 … to show him meeting with Pope Francis…

“Honor of a lifetime to meet His Holiness Pope Francis. I leave the Vatican more determined than ever to pursue PEACE in our world.”

So Trump evidently felt the meeting was a good one, and important…

But what was it that Pope Francis said to Trump that Trump promised he will not forget?

It seems — as Trump’s tweet suggests — that it was about peace, about working for peace, about building the preconditions for peace in the world.

As the New York Times reported today (link), one of the Pope’s gifts to Trump was a medallion engraved with the image of an olive tree — “a symbol of peace,” Francis explained.

“We can use peace,” Mr. Trump said. (These words could be heard because reporters had re-entered the room after the private meeting of the two leaders had concluded.)

Francis then replied, “It is with all hope that you may become an olive tree to make peace.”

Then, a few moments later, as he bade the Pope farewell, Mr. Trump told Francis, “I won’t forget what you said.”

What this peace would be, precisely, between which countries, in the face of which conflicts, is not entirely clear…

Would it involve Israel and Palestine? Syria? Conflict between the West and militant Islam? Venezuela, where civil strife is increasing? China and North Korea? Russia and Ukraine, Russia and the West over Crimea?

The hope expressed by the Pope does not exclude any of these conflicts, all of which I mentioned in my email prior to the meeting yesterday.

So we do not know, precisely.

All we know is that the two world leaders met this morning — a rather brief meeting, just a half hour.

But we also know something else quite important — that the Pope-Trump meeting was followed by a second meeting, a meeting that went longer, about 50 minutes.

And the second meeting may very well have been more important, in some ways, than the first.

That meeting was between Trump and the Vatican’s top two diplomats, Cardinal Pietro Parolin, the Secretary of State (photo below in the the Cortile San Damaso), and Archbishop Paul Richard Gallagher (photo also below). 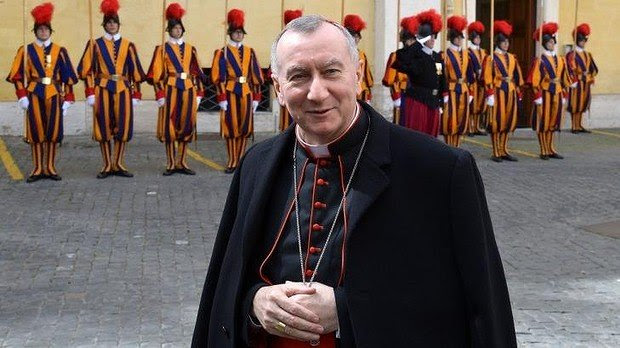 Cardinal Parolin (above) is a 62-year-old Italian. He is a career Church diplomat and speaks native Italian, fluent English and French, and near-native Spanish. He is an expert on Nigeria (he served for three years in the Nunciature in Nigeria, where he became familiar with the problems in Christian-Muslim relations) and Mexico (he served another three years, 1989–1992, in the Nunciature of Mexico; during his time in Mexico he contributed to the final phase of the extensive work begun by Archbishop Girolamo Prigione which led to the legal recognition of the Catholic Church in 1992 and the establishment of diplomatic relations between the Holy See and Mexico). He is also an expert in the process of negotiations for a global nuclear test ban treaty, and for eventual nuclear disarmament (Parolin was for years the Vatican’s representative to the Vienna nuclear arms treaty talks). And he is an expert on Vietnam, and on Venezuela, where he was most recently the nuncio. Finally, and not least important, Parolin is so well-respected that some speak of him as a possible candidate to be… the next Pope. So, in meeting with Parolin anfter meeting with Francis, Trump may have been meeting with the next Pope, after meeting with the present Pope…

And then there was Gallagher… 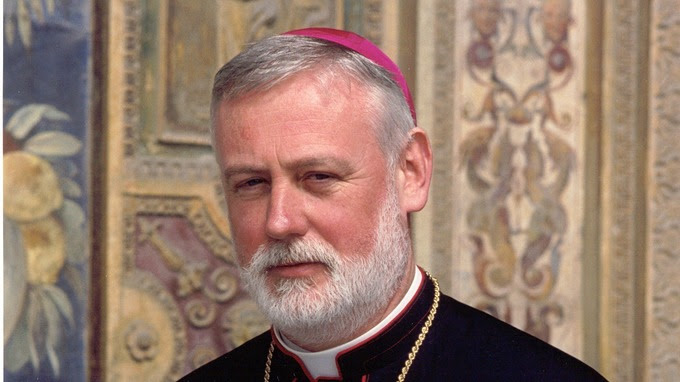 Archbishop Paul Richard Gallagher is a 63-year-old British prelate from Liverpool. He is the Vatican’s Secretary for Relations with States, which makes him more or less equivalent to the Vatican’s “Foreign Minister.” He has held posts in Tanzania, Uruguay, the Philippines, and at the Council of Europe in Strasbourg. He is a calm, thoughtful man with a global vision — the type of man who might emerge one day as a… Vatican Secretary of State himself.

And what did Trump talk about with Parolin and Gallagher, meeting with them for almost twice the time that he met with Francis?

Again, we do not know for sure…

As Gerard O’Connell reported today in America, “This is normal, as Francis explained on the flight back from Cairo at the end of April.”

On that flight, when a reporter asked what he had discussed in his private conversation with the Egyptian president, the pope replied, “Generally when I am with a head of state in private dialogue, that remains private, unless, by agreement, we say ‘let’s say on this point, we’ll make it public.'”

Here is the Vatican’s official statement after the meetings:

This morning, Wednesday 24 May 2017, the Honorable Donald Trump, President of the United States of America, was received in Audience by the Holy Father Francis and subsequently met with His Eminence Cardinal Secretary of State Pietro Parolin, accompanied by His Excellency Msgr. Paul Richard Gallagher, Secretary for Relations with States.

During the cordial discussions, satisfaction was expressed for the good existing bilateral relations between the Holy See and the United States of America, as well as the joint commitment in favour of life, and freedom of worship and conscience. It is hoped that there may be serene collaboration between the State and the Catholic Church in the United States, engaged in service to the people in the fields of healthcare, education and assistance to immigrants.

The discussions then enabled an exchange of views on various themes relating to international affairs and the promotion of peace in the world through political negotiation and interreligious dialogue, with particular reference to the situation in the Middle East and the protection of Christian communities.

The key phrase is “on various themes relating to international affairs and the promotion of peace in the world.”

The discussion went on for 50 minutes. Much must have been said in that time. We will only learn what the true content of the meeting was as future events unfold.

This was the 30th meeting between a U.S. president and a Pope over the past 100 years.

For the moment, we may conclude that this meeting was one that aimed at developing plans and strategies to bring about peace in situations of conflict.

If you would like to travel with Inside the Vatican to Russia, Ukraine and Rome in mid-July on our 4th annual Urbi et Orbi Foundation Pilgrimage, with meetings in Moscow and Kiev with leaders of the local Churches, please ask for more information by return email.

If you would like to make a very special journey with us to England in the footsteps of St. Thomas More at the end of June, please write to ask for more information.

Please consider subscribing to Inside the Vatican. If you do not subscribe, you will miss a great magazine.

Note: The Moynihan Letters go to more than 21,000 people around the world. If you would like to subscribe, simply email me an email address, and I will add you to the list. Also, if you would like to subscribe to our print magazine, Inside the Vatican, please do so! It would support the old technology of print and paper, as well as these Moynihan Letters.