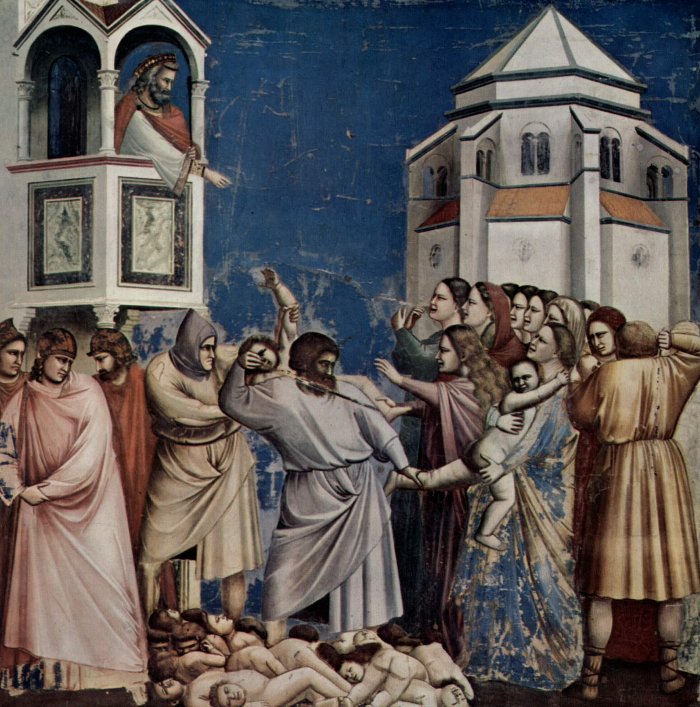 An image by Giotto illustrating The Slaughter of the Innocents. (link) The Persian wise man, Artaban, hero of the book The Other Wise Man, written in 1895 by Henry van Dyke, tells how Artaban, who had planned to set out with the other three wise men — Caspar, Melchior and Balthasar (link and link) — to find the Christ Child, was delayed along the way. He comes to Jerusalem after Joseph, Mary and Jesus had fled to Egypt, and witnesses the slaughter of the innocents…

Here below is the text of Part #7 of this story, so you may listen to the reading and read along with the text…

We have now posted the 7th in a 10-part series of a reading of the classic Christmas story “The Other Wise Man.” It is available here on YouTube (or by clicking the video below) or on Rumble.

Here is the text of Part #7 of the story of “The Other Wise Man,” by Henry van Dyke:

Part #7: The Other Wise Man

The streets of the village seemed to be deserted, and Artaban wondered whether the men had all gone up to the hill-pastures to bring down their sheep. From the open door of a low stone cottage he heard the sound of a woman’s voice singing softly.

He entered and found a young mother hushing her baby to rest.

She told him of the strangers from the far East who had appeared in the village three days ago, and how they said that a star had guided them to the place where Joseph of Nazareth was lodging with his wife and her new-born child, and how they had paid reverence to the child and given him many rich gifts.

“But the travellers disappeared again,” she continued, “as suddenly as they had come. We were afraid at the strangeness of their visit. We could not understand it. The man of Nazareth took the babe and his mother and fled away that same night secretly, and it was whispered that they were going far away to Egypt. Ever since, there has been a spell upon the village; something evil hangs over it. They say that the Roman soldiers are coming from Jerusalem to force a new tax from us, and the men have driven the flocks and herds far back among the hills, and hidden themselves to escape it.”

Artaban listened to her gentle, timid speech, and the child in her arms looked up in his face and smiled, stretching out its rosy hands to grasp at the winged circle of gold on his breast. His heart warmed to the touch. It seemed like a greeting of love and trust to one who had journeyed long in loneliness and perplexity, fighting with his own doubts and fears, and following a light that was veiled in clouds.

“Might not this child have been the promised Prince?” he asked within himself, as he touched its soft cheek. “Kings have been born ere now in lowlier houses than this, and the favorite of the stars may rise even from a cottage. But it has not seemed good to the God of wisdom to reward my search so soon and so easily. The one whom I seek has gone before me; and now I must follow the King to Egypt.”

The young mother laid the babe in its cradle, and rose to minister to the wants of the strange guest that fate had brought into her house. She set food before him, the plain fare of peasants, but willingly offered, and therefore full of refreshment for the soul as well as for the body.

Artaban accepted it gratefully; and, as he ate, the child fell into a happy slumber, and murmured sweetly in its dreams, and a great peace filled the quiet room.

But suddenly there came the noise of a wild confusion and uproar in the streets of the village, a shrieking and wailing of women’s voices, a clangor of brazen trumpets and a clashing of swords, and a desperate cry: “The soldiers! the soldiers of Herod! They are killing our children.”

The young mother’s face grew white with terror. She clasped her child to her bosom, and crouched motionless in the darkest corner of the room, covering him with the folds of her robe, lest he should wake and cry.

But Artaban went quickly and stood in the doorway of the house. His broad shoulders filled the portal from side to side, and the peak of his white cap all but touched the lintel.

The soldiers came hurrying down the street with bloody hands and dripping swords. At the sight of the stranger in his imposing dress they hesitated with surprise. The captain of the band approached the threshold to thrust him aside.

But Artaban did not stir. His face was as calm as though he were watching the stars, and in his eyes there burned that steady radiance before which even the half-tamed hunting leopard shrinks, and the fierce blood-hound pauses in his leap. He held the soldier silently for an instant, and then said in a low voice:

“I am all alone in this place, and I am waiting to give this jewel to the prudent captain who will leave me in peace.”

He showed the ruby, glistening in the hollow of his hand like a great drop of blood.

The captain was amazed at the splendor of the gem. The pupils of his eyes expanded with desire, and the hard lines of greed wrinkled around his lips. He stretched out his hand and took the ruby.

“March on!” he cried to his men, “there is no child here. The house is still.”

The clamor and the clang of arms passed down the street as the headlong fury of the chase sweeps by the secret covert where the trembling deer is hidden.

Artaban re-entered the cottage. He turned his face to the east and prayed: “God of truth, forgive my sin! I have said the thing that is not, to save the life of a child. And two of my gifts are gone. I have spent for man that which was meant for God. Shall I ever be worthy to see the face of the King?”

But the voice of the woman, weeping for joy in the shadow behind him, said very gently: “Because thou hast saved the life of my little one, may the Lord bless thee and keep thee; the Lord make His face to shine upon thee and be gracious unto thee; the Lord lift up His countenance upon thee and give thee peace.”

(1) to keep Inside the Vatican Magazine (which we have published since its founding in 1993, nearly 29 years ago) independent and comprehensive… Now available to you digitally as well as in print! Now offering Virtual Events, ITV Writer’s Chat and Reader’s Chat!