There were many dramatic and fascinating moments at the Bishops’ Synod (October 5-19).

But three “revelatory moments” stand out.

And the third concerns Pope Francis and the one occasion that he spoke during the Synod — his final, closing discourse.

Let’s consider each in turn.

An Evidently Unscripted “Revelation of the Method”

Something odd, unexpected — something “unscripted” — occurred at the very end of the important Vatican press conference on Monday, October 13.

This was the press conference at which the  preliminary Synod report was presented.

This was, as it were, the dramatic “heart” of this Synod — the moment when it exploded into controversy.

It was the presentation to the public of the so-called “Relatio post disceptationem,” or “Report after debate” — the Report that summarized all that had been said by the bishops during the first week of the Synod.

It was this report which instantly became so controversial, especially because of the language chosen to describe what the Church’s attitude should be toward homosexuality and homosexual couples.

It was this report which was “amended” during the second week of the Synod, due to the protests of many bishops, issuing in the final, revised statement and the voted propositions.

The cardinal yielded to the archbishop

Picture the dramatic scene: a packed press room, hundreds of journalists from around the world, dozens of television cameras rolling…

In the front, three cardinals, Cardinal Peter Erdo, Archbishop of Esztergom-Budapest, Hungary, the General Relator of the Synod (and so the editor of this document); Cardinal Luis Antonio Tagle, Archbishop of Manila, the capital of the Philippines; Cardinal Ricardo Ezzati Andrello, Archbishop of Santiago, Chile; and with them an archbishop, Archbishop Bruno Forte of Chieti-Vasto in central Italy, the Synod’s special secretary. Also present, the Director of the Press Office, Father Federico Lombardi, S.J. 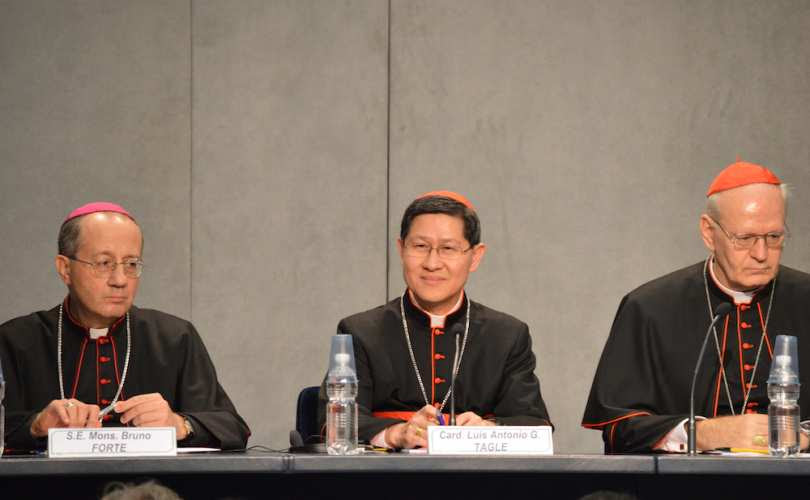 (from left to right, Forte, Tagle and Erdo)

In the audience, the journalists, representing the world’s media.

For more than one hour the press conference rolls forward.

The text is presented. Each of the prelates speaks, Erdo in Italian, Ezzati Andrello in Spanish, Tagle in English, and Forte in Italian.

Then the journalists begin to ask their questions.

Most focus on the two great “vexed questions”: (1) the possibility of admitting, under certain circumstances, of the divorced and remarried to communion; and (2) the three paragraphs toward the end of the report, Paragraphs 50, 51, and 52, entitled “Welcoming homosexual persons.”

Those paragraphs state, in part: “Homosexuals have gifts and qualities to offer to the Christian community.”

And they ask: “Are our communities capable of providing [them a welcoming home], accepting and valuing their sexual orientation, without compromising Catholic doctrine on the family and matrimony?”

Midway through the press conference, the American Catholic Michael Voris ofChurchMilitant.TV challenges the prelates on this section.

In response, Archbishop Forte says: “I guess that what I want to express is that we must respect the dignity of every person, and the fact to be homosexual doesn’t mean that this dignity must be not recognized and promoted… I think it is the most important point, and also the attitude of the Church to welcome persons who have homosexual orientation is based on the dignity of the person they are.”

At this point, despite the nearly one hour-long press conference, one thing is still not clear: How, in fact, had the document been stitched together? It had occurred very quickly, over the weekend. Who had actually drafted it? Had it been Erdo himself, alone? Had Erdo written the whole text, including these passages? Or had he relied on others to draft certain sections? How had it worked?

In other words, to what extent did these passages truly express the “sense of the Synod,” the general consensus? Was it possible that they represented only the sense of only one editor? Or just a few? And if so, which one, or which few?

This “procedural” question never came up at all during the press conference.

It was, evidently, simply “assumed” that the entire text was the product of a “group mind,” the group of editors who, under Erdo’s direction, had written the text — without any particular individual bias.

But this assumption was brought into question by what happened next.

One hour, six minutes and 15 seconds into the press conference (at 1:06:15, just three minutes before the end, something unexpected happened.

Cardinal Erdo was asked to answer the very last question of the press conference.

The question was about Paragraph 52 and whether the language there  signified a shift in the Church’s attitude toward homosexual unions and their acceptance in society.

(Here is Paragraph 52: “52. Without denying the moral problems connected to homosexual unions it has to be noted that there are cases in which mutual aid to the point of sacrifice constitutes a precious support in the life of the partners. Furthermore, the Church pays special attention to the children who live with couples of the same gender, emphasizing that the needs and rights of the little ones must always be given priority.”)

Father Lombardi gestured toward Erdo to answer, but Erdo declined to answer the question.

Then he did more.

Erdo gestured toward Archbishop Forte, and, almost as an aside, smiling broadly, said: “Quello che ha redatto il brano deve sapere cosa significa.” (“He who drafted that passage ought to know what it means.”)

In other words, that Forte had drafted those passages, and ought to answer the journalist’s question.

We understood — if we may trust the accuracy of Erdo’s words — that Forte was “responsible” for those three paragraphs which were then inserted into the text Erdo edited.

It will take only one minute of your time to see for yourself as Erdo speaks the words cited above.

There is a complete videotape recording of this press conference at the following links: YouTube; Rome Reports (the two videos are identical).

You may start at 1:05:40. A woman asks the final question of the press conference, in Italian.

Thirty-five seconds later, at 1:06:15, Erdo takes his distance from the passage, attributes the authorship to Forte, and yields to Forte, allowing him to answer.

Forte begins by saying that the text is quite clear in stating that the Church does not agree that the same terminology may be used to describe the union of a man and a woman in marriage and the union of two people of the same gender in a relationship.

“The Church does not believe that the same term ‘family’ can be used to refer indifferently both to a union between a man and a woman that is open to procreation and to a same-gender union,” Forte says.

But he adds: “Having said this, it seems obvious to me that human persons involved in different experiences have rights that must be protected. Therefore, the issue here is not of equating the two in all senses, including in terminological terms. But naturally, this does not mean that we should rule out looking for a way to guarantee the rights of people living in same-gender unions. It is a question – I believe – of civilization and of respect for the dignity of persons.

Erdo then decided to add a few words of clarification.

His words were in some ways prophetic.

What he says describes almost perfectly what would come to pass in the second week of the Synod: the passage would be reviewed, and redrafted.

So, in a sense, Erdo already knew what would happen during the second week of the Synod’s proceedings. In other words, he knew already that these controversial passages were inadequate, and would need revision — despite the fact that he has just presented them.

“One could add,” Erdo said, “that, even during the free discussion, this theme emerged, and some said it seemed that something was lacking in these paragraphs — even though at one point there is a mention — a more precise reference also to the fact that there are also disordered forms of living together.”

Erdo said that during the upcoming week it would be necessary to integrate this truth about the “disordered” nature of some forms of living together with the positive elements mentioned in Paragraphs 50, 51 and 52.

And that is precisely what happened during the second week of the Synod.

So what do we learn from this?

In these few seconds of videotape, we may glimpse a certain amount of ecclesial maneuvering which normally is not visible.

We see the curtain pulled back for a moment to reveal how an imperfect text was drafted, included in a Synodal document, published in that imperfect form, and then, amended.

The second “revelatory moment” was when Cardinal Kasper, in the middle of the second week, as the text was being re-drafted, first gave, then denied that he had given, an interview to British journalist Edward Pentin — only to have Pentin immediately post a recording of the interview online…