By Courtney Mares for CNA (link) 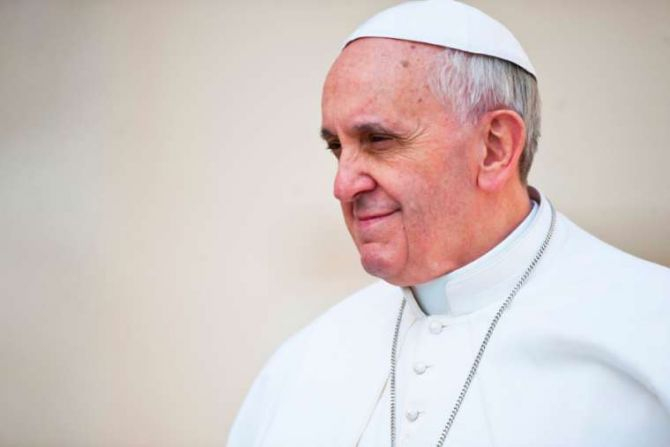 Pope Francis said Wednesday that the Catholic Church is firm in its stance on abortion because “abortion is murder,” and urged priests to be pastoral rather than political when faced with the question of who can receive Communion.

Answering questions aboard the papal plane from Bratislava, Slovakia, to Rome on Sept. 15, the pope emphatically said that abortion ends a human life and that human life must be respected.

“Scientifically it’s a human life. The textbooks teach us that. But is it right to take it out to solve a problem? And this is why the Church is so strict on this issue because it is kind of like accepting this is accepting daily murder,” he said.

In response to a question about the U.S. debate about denying Communion to politicians who support abortion, the pope said that in the history of the Church when bishops have acted politically rather than as pastors, there have been problems.

“What should the pastor do? Be a shepherd, do not go around condemning … but be a pastor. But is he also a pastor of the excommunicated? Yes, he is the pastor and … he must be a shepherd with God’s style. And God’s style is closeness, compassion, and tenderness,” the pope said.

“For me, I don’t want to particularize […] the United States because I don’t know the details well, I give the principle … Be a pastor and the pastor knows what he has to do at all times, but as a shepherd. But if he comes out of this shepherding of the Church, immediately he becomes a politician,” Francis said.

The pope cited the controversy over Communion for divorced and remarried Catholics that followed the publication of his 2016 apostolic exhortation Amoris laetitia.

“Do you remember the storm that was stirred by Amoris laetitia when that chapter on accompanying separated, divorced couples came out: ‘Heresy, heresy!’ Thank God there was Cardinal Schönborn, a great theologian who clarified things,” he said.

Pope Francis said that he had never personally refused the Eucharist to anyone, adding that he was not aware of ever having been in the situation that the journalist who posed the question described: that of a pro-choice politician coming to him for Communion.

The pope also told the story of a time when he inadvertently gave Communion to a Jewish woman at a retirement home who had approached the sacrament in ignorance.

Pope Francis said: “Those who are not in the community cannot take Communion — like this Jewish lady, but the Lord wanted to reward her and without my knowledge — why?”

The pope’s comments during the in-flight press conference came at the end of his four-day visit to Hungary and Slovakia.

It was the 84-year-old pope’s first international trip since undergoing colon surgery in July.

Pope Francis began his journey on Sept. 12 with a visit to Budapest, where he offered the closing Mass of the 52nd International Eucharistic Congress and met with Hungarian Prime Minister Viktor Orbán.

The pope told journalists on the flight that he had discussed ecology and his concerns about a “demographic winter” in Europe with Orbán, but did not touch on immigration, a topic on which they diverge sharply.

After spending just seven hours in Budapest, the pope departed for neighboring Slovakia on the same day and spoke at an ecumenical gathering in the capital city, Bratislava, on the evening of his arrival.

The pope addressed Slovakian political leaders, offered encouragement to the Catholic community, and visited a homeless center run by Mother Teresa’s nuns on the capital’s outskirts on Sept. 13.

Pope Francis then traveled to the eastern city of Prešov, where he presided at a Byzantine Divine Liturgy on Sept. 14. In the afternoon, he met with members of the minority Roma community in nearby Košice and spoke to 25,000 young people about the importance of the sacrament of Confession.

Before returning to Rome on Sept. 15, the pope offered Mass at the Basilica of Our Lady of Seven Sorrows in Šaštín.

The pope’s flight touched down at Rome’s Fiumicino airport at 3:30 p.m. local time. The 90-minute flight marked the last time that Pope Francis will fly Alitalia, Italy’s long-struggling national airline which is being replaced next month by a new airline called Italia Trasporto Aereo (ITA).

Out of the six questions that the pope was asked during the in-flight press conference, he spent the most time speaking about abortion and Holy Communion.

Pope Francis said that many times before a mother realizes that she is pregnant, her child’s DNA and organs have formed.

“It’s a human life, period. This human life must be respected. This principle is so clear,” he said.

During the flight, Pope Francis also answered a question about a resolution in the European Parliament seeking the recognition of same-sex marriages and registered partnerships in all member states of the European Union.

In response, the pope underlined that marriage is a sacrament between a man and woman, instituted by Christ, which the Catholic Church does not have the power to change.

He noted that there are civil laws which seek to help the situation of couples “of different sexual orientations,” but which at the same time do not challenge the teachings of the Church on the sacrament of marriage, such as giving same-sex couples the security of inheritance, or of health insurance.

“But marriage is marriage,” he emphasized. “This does not mean condemning people who are like that, no, please, they are our brothers and sisters and we must accompany them.”

The pope noted that civil laws such as France’s PACS — which allows adults of any sexual orientation to form a civil union — exist, but are not sacramental marriage.

“Sometimes what I said is confusing. All the same, respect everyone,” he said, adding: “Please don’t make the Church deny her truth.”

“Many, many people of homosexual orientation approach the Sacrament of Penance, they approach to ask priests for advice, the Church helps them to move forward in their lives,” he said.