Pope Francis and Rabbi Skorka and their shared dream

Pope Francis and Rabbi Skorka and their shared dream

Rabbi Skorka on his lunch conversation with the Pope about their dream to pray together at the Western Wall in Jerusalem and at Jesus’ birthplace in Bethlehem.

“Peace in the Holy Land, and throughout the Middle East, is something that is in the heart of Pope Francis,” Rabbi Abraham Skorka, 63, told me on January 17, after he and his wife, Silvia, had just had lunch together with their old friend from Buenos Aires. 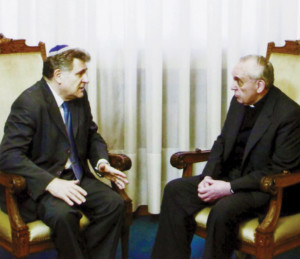 Rabbi Skorka with then-Cardinal Bergoglio in conversation in Buenos Aires from the back cover of their book On Heaven And Earth.

They discussed their dream, and the Pope’s historic “pilgrimage” to Amman, Bethlehem and Jerusalem, May 24-26, over a kosher lunch, in a private room, in the Sanctae Marthae Vatican guesthouse where the Bishop of Rome lives, on January 17.

“We are on our way to realizing the dream,” Skorka said. “The de­tails (of the papal trip) have yet to be finalized, but everything is moving ahead in a positive way.”

Politically it’s not a problem, but quite how all this can be done has yet to be worked out.

In the course of their conversation, they returned to a topic that they had already touched on during Skorka’s visit here last September: how to give a message of peace to the inhabitants of a region where passions run high and conflicts exist.

“We exchanged ideas about how we could give a message of peace, hope and faith to the world in general and, especially, to the Holy Land,” Skorka said.

They talked too about dialogue and Jewish-Catholic relations, and discussed how academic links could be forged between the Rabbinic Seminaries in Latin America and the Pontifical Universities in Rome, beginning with the Jesuit-run Gregorian University, where Skorka, who is rector of the Latin American rabbinic seminary in Buenos Aires, had given a lecture the previous day.

“I think these are things that should not be hidden, because our idea is to make a contribution to what dialogue means, to what spirituality means, and what the things of the soul mean, as well as the search for God,” Skorka said.

They had engaged in this kind of dialogue over many years in Buenos Aires, and published an interview book together: On Heaven and Earth.

Today, however, “there is a difference because my friend is Pope, but we follow through with this commitment, though now at a global level,” Skorka said. 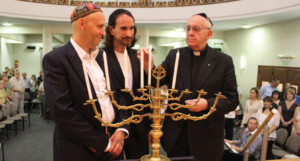 Bergoglio at a ceremony in a synagogue in Buenos Aires.

Skorka said he was pleased to see his friend “looking well, serene, relaxed, very concentrated on his agenda, not at all nervous, and very sure of what he’s doing.”

Skorka found Pope Francis even more affectionate than ever towards Argentineans, and one can see that he misses his homeland by the special attention he gives to all the Argentinians who come to visit him.

This was seen clearly the previous day, January 16, when Skorka and several other Argentine rabbis with their wives met the Pope, had lunch and chatted together for more than two hours during which the rabbis sang for him. “He was so full of affection and joy,” Skorka said.

During their private lunch on January 17, Skorka and his wife chatted with Francis about Argentina. “He’s totally informed about the reality of the country,” Skorka said. Among other things, they discussed how to develop more ways of giving assistance to the needy in Argentina, also in the interior of the country. “Our vision is to give support to Argentine society,” he said.

Skorka’s wife, Silvia, had not met Ber­goglio since he left Buenos Aires last February to come to Rome for the conclave. She said she was particularly struck “by the inner peace that he transmits and which he says he feels, above and beyond the enormous responsibility he now has as head of the Catholic Church.”

In late September, in a gesture without precedent in the history of Christian-Jewish relations, Pope Francis and Rabbi Skorka celebrated their friendship by living in the Vatican together for several days, sharing all meals, including on two Jewish festivals and the Sabbath at which the Rabbi said prayers in Hebrew.

The two spent four days together from September 25 to 29 at the Vatican guesthouse (the Domus Sanctae Marthae) where Pope Francis lives and where his friend from Buenos Aires was his guest.

“I eat with him at breakfast, lunch and dinner every day,” Skorka told me at the time. “He cares for me, and watches everything regarding my food to make sure it is all kosher and according to my religious tradition. These are festive days, and I have to say certain prayers at meals and, I expand the last prayer and translate it. He accompanies me together with the others at table — his secretaries and a bishop — and they all say ‘Amen’ at the end,” the rabbi said.

By acting in this way, the Pope and rabbi are sending an extraordinary message of friendship, dialogue and peace not only to their respective religious communities but also to the whole world.

And they plan to do even more together, Rabbi Skorka revealed when we talked together at the Domus on September 27.

He and the Pope are planning to travel together to the Holy Land in May.

The Israeli and Palestinian authorities have invited Pope Francis—and the Ecumenical Patriarch of Constantinople, Bartholomew I, wants him to celebrate the 50th anniversary of the historic 1964 meeting of his predecessor, Athenagoras, with Pope Paul VI in the Holy City.

“We are dreaming of traveling together to Israel, and the Pope is working on this subject,” the rabbi, who is rector of the Latin American Rabbinic Seminary, said. “I dream of embracing him at the Kotel, the Wailing Wall, and I will accompany him to Bethlehem, in the Palestinian territories.  His presence can help a lot at this moment when the peace talks are starting again.”

Skorka sees a deep spiritual significance for both of them in being together at the sites that are sacred to their respective religions. “I do not cease to be a Jew for him, and he goes on keeping his own faith. But the two spiritualities have to have a point of encounter.  We cannot live in a world where we reject each other, we must build bridges.” He believes his friend “has become a spiritual reference point for the whole world, not just for the Catholic Church” as was evidenced when he called for a day of prayer and fasting for peace in Syria in early

“Ours is a spiritual journey,” Skorka said of their friendship, which dates back to 1997 when Bergoglio became coadjutor bishop of the Buenos Aires archdiocese. “Like him I don’t much like protocol, and like him I too go for the essentials.”

Since then, they have done many things together, including producing an interview book — Sobre el cielo y la tierra (“On heaven and earth”) — that has been translated into several languages and will soon be in Hebrew too.

“We hold to different traditions, but we are creating a dialogue that has not existed for centuries,” Skorka said. “Both of us believe that God has something to do with our friendship and with what we are doing.  There are too many coincidences for it all to be mere chance.”

“We come together without burying our identities.  I spoke to him about evangelization, and he stated emphatically that the Catholic Church cannot engage in proselytism,” Skorka said.

“We are not looking for a photo opportunity, but we want what we are doing to trigger a re-thinking about things. Ours is not a relation of ‘tea and sympathy’; that is not my way, and it is not Bergoglio’s way. We want to move ahead by actions, we must advance by building bridges, through a living dialogue; not a dialogue of words, but a dialogue of actions that reflect our commitment.”

Rabbi Skorka believes that “many Christians and Jews in Europe and the United States do not understand our friendship; for them it comes as a shock,” but he is convinced that “history is made more by action than by political reasoning.”

Skorka met his friend in the Vatican for the first time after his election, when he came to Rome at the invitation of the Focolare movement in June. He returned in September to visit the Sant’ Egidio community which was holding its annual international inter-religious meeting in Rome.