The Reawakening of the Church in France

The Reawakening of the Church in France

Its opposition to the law on homosexual marriages is finding agreement even among non-Catholics and nonbelievers. The archbishop of Paris is at the helm of the new course. (Originally publishe­d in L’Espresso magazin­e December 7)

No one would have bet on it. But after decades of invisibility and torpor, the French Catholic Church has returned vigorously to the public scene.

It was a minority and a minority it remains, in a country where less than 5 percent of the population goes to Sunday Mass, and where baptisms of children are increasingly rare. But it is one thing to give up, and another to be creative. That role as a “creative minority” is the one Pope Joseph Ratzinger himself has assigned to Catholicism in secularized regions. The Church of France is putting this to the test…

In mid-August, the archbishop of Paris, Cardinal André Vingt-Trois, raised this prayer to Our Lady of the Assumption: “May children and young people cease to be the object of the desires and conflicts of adults, in order to enjoy fully the love of a father and mother.” A furious controversy exploded in France, which is on the path to legalizing marriage between persons of the same sex with the possibility of adopting.

But the newspaper Le Monde also made a stir by entering the fray in defense of the archbishop… The impression, however, was that everything could be reduced to the initiative of the cardinal. And that no one would march behind him.

But in the fall, everything changed. On November 7, gay marriage obtained the approval of the Council of Ministers. Cardinal Vingt-Trois protested to President François Hollande, Prime Minister Jean-Marc Ayrault, and Minister of Justice Christiane Taubira, and made public what he had objected to them in private. The archbishop responded to what the minister had told him, namely that “what is at stake is a reform of civilization,” saying he too thinks this way, that the issue is precisely this, of a radical change of the nature of man, of the sexes, of procreation. And therefore one cannot get carried away with an act of tyranny of such impact, deciding everything by a majority with a margin of 1 or 2 percent.  To Minister Taubira, who told him “we are not touching the Bible,” the cardinal rebutted that not even he was bringing this into discussion: “It is a question that concerns man, and this is enough.”

And this is precisely what is new. Against the law on gay marriage, a resistance is mobilizing that is not confessional, but humanistic, of men and women with the most varied visions of the world.

On Saturday, November 17, in Paris and in a dozen other French cities, hundreds of thousands of people marched through the streets. The demonstrations were organized by three unexpected figures… only one a Catholic. No Church association hoisted its banners. The Catholics simply blended into the demonstration. But the official Church blessed everything.

That same morning, in Rome, Benedict XVI urged about 40 bishops from France on their ad limina visit to “take care to pay attention to proposed civil legislation that could undermine the protection of marriage between a man and a woman.” 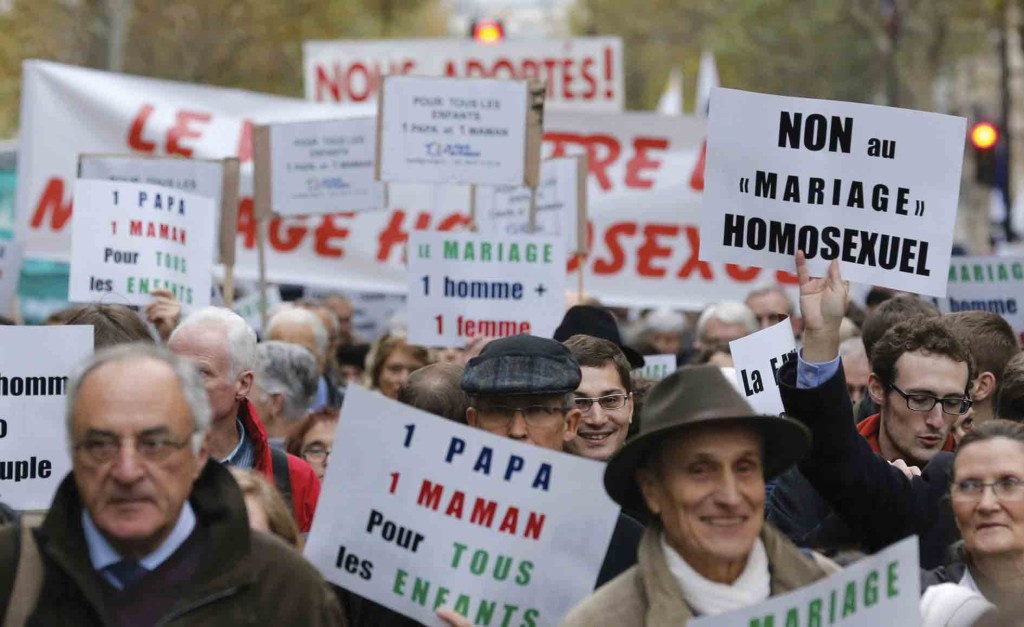 Also siding with the Church and against the “reform of civilization” is the feminist philosopher Sylviane Agacinski, wife of the socialist (and Protestant) former Prime Minister Lionel Jospin. She has strongly criticized those gender studies which present sexual differences as a cultural construction, and has warned of the serious consequences that, for example, procreation through insemination in couples composed of two women could have on a child.

Clear opposition to the law on homosexual marriage has been expressed by the chief rabbi of France, Gilles Bernheim, and the president of the French Council of Muslim Faith, Mohammed Moussaoui.  And from Moscow, in a letter to the archbishop of Paris, Metropolitan Hilarion of Volokolamsk, head of the Department for External Relations of the Russian Orthodox Church, expressed his appreciation that the French “have not remained indifferent to an initiative of the authorities that is unacceptable for Christians.”  He added: “With the present letter, I would like to express my solidarity and my support for your consistent and uncompromising position.”

A recent survey by the opinion polling group BVA found a reversal in the trend of French public opinion in 2012. While from 2000 to 2011, the proportion of those in favor of gay marriage was constantly on the increase, from 48 to 63 percent, this year those in favor dropped to 58 percent. And those in favor of adoption by gay couples also fell by six points, from 56 percent in 2011 to 50 percent in 2012.

The archbishop of Paris is no longer a general without an army. The bishops are with him too. They have elected him president of the episcopal conference. The Church of France was once called the “eldest daughter of the Church.” As a creative minority, it could become that again.