Vatican finance trial: Judges to rule whether to keep or scrap case in face of procedural missteps

Vatican finance trial: Judges to rule whether to keep or scrap case in face of procedural missteps

By Hannah Brockhaus for CNA (link) 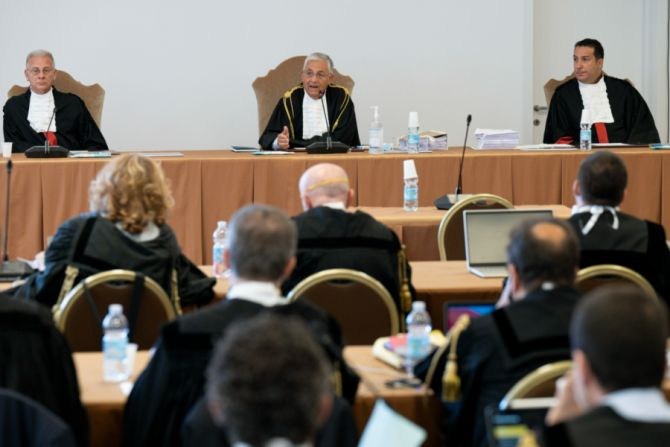 A finance trial involving 10 defendants opens at the Vatican on July 27, 2021./ Vatican Media.

The Vatican finance trial involving Cardinal Angelo Becciu continued on Tuesday with two hours of legal debates that could potentially result in an abrupt end to the court case.

Judges adjourned the hearing until Wednesday morning, when they will give their ruling on whether to move forward with the trial after the defendants’ lawyers took issue with what they consider to be significant procedural missteps by the prosecution.

Tribunal judge Giuseppe Pignatone may order the prosecutor’s office to hand over missing materials that the 10 defendants’ legal teams need to prepare their defenses, or he could order investigators to start over from scratch.

The trial is the culmination of more than two years of investigation by the Vatican into what happened in and around the Secretariat of State’s 350 million-euro purchase of an investment property in London between 2014 and 2018.

The investigation, due to four decrees from Pope Francis, was carried out with huge leeway for actions usually not permitted by Vatican law, including the use of wiretaps. If the court orders the investigation to begin again, these allowances would no longer be available to investigators.

The case is in jeopardy because of missing materials prosecutors have not made available to the defense attorneys. Most contested are the video files of interviews with Msgr. Alberto Perlasca, a suspect of the investigations who was not charged and is now a significant witness for the prosecution.

Defense lawyers say they need to review the recordings because a summary they were provided with is missing information.

They are also still waiting to receive copies of forensic evidence gathered from defendants’ phones and computers, which were due to be received on Aug. 9.

Alessandro Diddi, the deputy prosecutor and lead investigator on the case, has yet to follow the judge’s order to make the tapes available.

Diddi said on Oct. 5 that he would like to share the video recordings, but claimed that his hands were tied due to concerns about “privacy” for the people involved.

Several defense attorneys argued that if these procedural errors are not corrected, it is impossible for the trial to continue, because they do not have the information on which to form their case, and it should be thrown out.

Diddi later admitted that “maybe we made a mistake.”

Tribunal president Pignatone, together with two other Vatican judges, will now have to decide whether to push the trial through or let it collapse.

Diddi and Pignatone have clashed previously, going head-to-head for years during one of Rome’s largest anti-mafia trials, known as “Mafia Capitale.”

Disagreements between Diddi, a lawyer for one of the main defendants, and Pignatone, then Rome’s chief prosecutor, played out publicly during the trial.