The director of the Vatican’s Financial Intelligence Authority said the Vatican will further amend its finance-related laws in the coming months, increase screening of account holders at the Vatican bank and continue assessing the potential risk that accounts could be used for money laundering and the financing of terrorism.

Rene Brulhart, the Swiss finance lawyer hired to monitor the legality and transparency of Vatican financial activity, presented his office’s first report at a May 22 news conference. 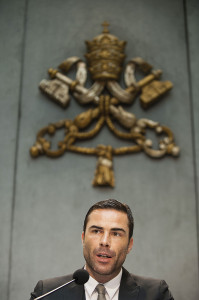 The Vatican has “a very clear, strong commitment to fight money laundering and terrorism financing fully in line with its moral values, but also with its responsibility to become a credible partner in the international environment,” he told reporters.

He said that in 2012, he received six reports of suspicious financial activities from Vatican offices and, after studying the cases, he forwarded two of the reports to the Vatican criminal court for further investigation and possible prosecution. It is up to the Vatican prosecutor to release information about the cases, which could involve money laundering, Brulhart said.

The fact that only one suspicious activity report was submitted in 2011, six were submitted in 2012 and more than that in the first quarter of 2013 prove that the Institute for the Works of Religion — the so-called Vatican bank — and other Vatican offices are committed to greater transparency and stringency and are learning to implement the stricter laws governing financial transactions enacted by the Vatican since 2010, he said.

“Filing a suspicious transaction report is not a bad thing,” he said; it simply signals to Brulhart and his investigators the fact that a transaction has “deviated from the ordinary behavior” of a particular Vatican bank account holder or a person or company with whom a Vatican office does business.

The Vatican’s Financial Intelligence Authority works in a similar way to financial intelligence agencies in other countries and has signed cooperation agreements with several, including the U.S. Financial Crimes Enforcement Network, a bureau of the U.S. Department of the Treasury that investigates potential illegalities within the U.S. financial system.

In addition to investigating the reports of suspicious activities and cooperating with international finance-crime intelligence agencies, the Vatican office collects and analyzes the obligatory reports filed when more than 10,000 euros (about $13,000) in cash is brought into or taken out of the Vatican. It also educates Vatican offices on spotting potential abuses and conducts on-site inspections, including of the Vatican bank. 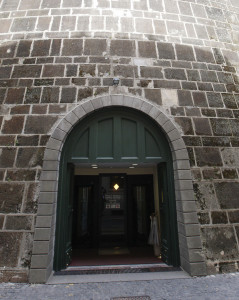 The main entrance of the Institute for the Works of Religion, known colloquially as the Vatican bank.

However, he said, the Vatican’s situation differs in many ways from most countries, since “there’s no financial sector, no commercial banks, no insurance companies” and no stock exchange.

At the same time, it is “a global institution with worldwide religious activities, missions, priests in the field,” he said. Things get complicated when the Church works in countries like Syria that are under international economic sanctions, so extra care must be taken to ensure — and certify — that resources going into the country are used for religious and humanitarian activities. The Vatican also needs to collect donations from around the world and distribute them around the world, which leads to “potential risks” of financial crime.

The revised Vatican laws on financial crimes, he said, are designed “to protect the Holy See” and its religious and charitable mission around the world from “abuse or misuse.”

Further revisions to the laws are expected in the coming months, he said, partially in response to suggestions made by “Moneyval,” the Council of Europe’s Committee of Experts on the Evaluation of Anti-Money Laundering Measures and the Financing of Terrorism.

One of Moneyval’s recommendations was that Brulhart, as director of the Financial Intelligence Agency, should have greater authority and independence. The Moneyval report, issued last July, also recommended the Vatican bank be “independently supervised by a prudential supervisor in the near future.”

Brulhart said he expected both those points to be addressed by the Vatican before the next Moneyval evaluation, which is expected in December.