Pope at Angelus: ‘Incarnation calls us to recognize Jesus in others’

Pope at Angelus: ‘Incarnation calls us to recognize Jesus in others’ 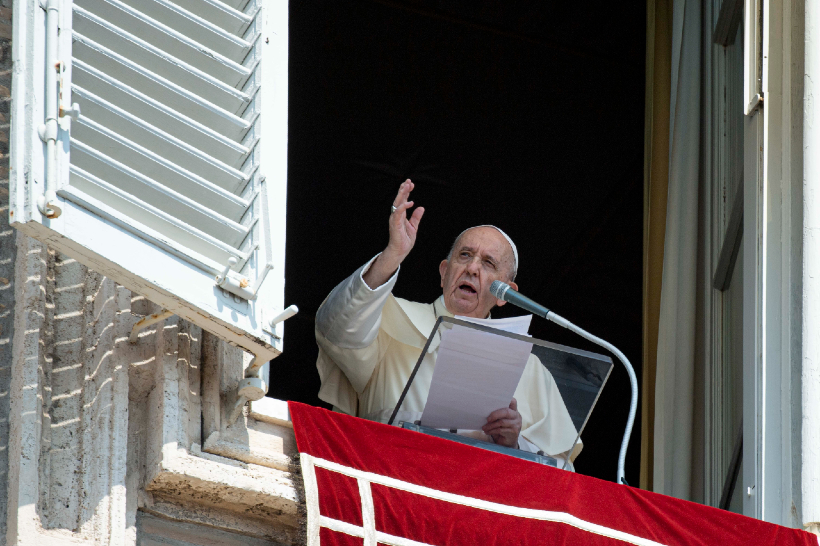 In his Sunday Angelus address, Pope Francis reflects on the “scandal” of the Incarnation of the Son of God, and urges Christians to draw near to Christ in the Sacrament of the Eucharist.

Pope Francis took his cue at the Angelus on Sunday from the day’s Gospel (Jn 6:60-69), in which Jesus’ disciples react to His speech following the multiplication of the loaves.

Jesus had told His disciples that only those who “eat my flesh and drink my blood have eternal life, and I will raise him on the last day. For my flesh is true food and my blood is true drink.”

Speaking to pilgrims gathered in St. Peter’s Square for the noon-day Angelus prayer, the Pope noted that Jesus invited His disciples to interpret the Sign of the multiplication of the loaves and to believe in Him.

Jesus, he said, “is the true bread come down from heaven, the bread of life; and He revealed that the bread He will give is His body and blood.”

Pope Francis highlighted the reaction of Jesus’ disciples, many of whom refused to believe such a hard saying, stopped following Him, and returned to their former ways of life.

At that point, he noted, Jesus turned to the Twelve and ask if they also wished to leave. Peter, however, responded that Jesus alone has “the words of eternal life.”

Scandal of the Incarnation

The Pope then reflected on the reaction of those who left Jesus and refused to believe.

“Jesus’ words enkindled great scandal,” he said. “He was saying that God decided to manifest Himself and accomplish salvation in the weakness of human flesh.”

The Incarnation of the Son of God, he added, has throughout history put up an obstacle to faith in Jesus in many people’s hearts.

Jesus, said the Pope, “affirms that the true bread of salvation, which transmits eternal life, is His very flesh; that to enter into communion with God, before observing the laws or satisfying religious precepts, it is necessary to live out a real and concrete relationship with Him.”

This affirmation means that God cannot be followed merely in dreams or illusions of grandeur, but only through a living relationship with Him in Jesus Christ.

Pope Francis went on to say that following Jesus means recognizing His humanity and that of His brothers and sisters whom we meet along the streets of life.

Today, too, Christians can be scandalized by the revelation of God in the Jesus’ humanity.

The Pope said St. Paul called this the “folly” of the Gospel for those who seek miracles or worldly wisdom.

“And this ‘scandalousness’ is well represented by the sacrament of the Eucharist: what sense can there be, in the eyes of the world, in kneeling before a piece of bread? Why on earth should someone be nourished assiduously with this bread?” asked the Pope.

Pope Francis repeated that Jesus’ multiplication of the loaves incited great admiration amongst His contemporaries, but that His interpretation as a sign of His sacrifice was unacceptable to many of them.

“Jesus Christ throws us into crisis,” he said. “We should be worried if He does not throw us into crisis, because we might have watered down His message!”

And the Pope concluded his catechesis urging Christians to pray for the grace to be converted to Jesus’ “words of eternal life.”

“May Mary Most Holy, who bore her Son Jesus in the flesh and joined herself to His sacrifice, help us to always bear witness to our faith in our real lives.”