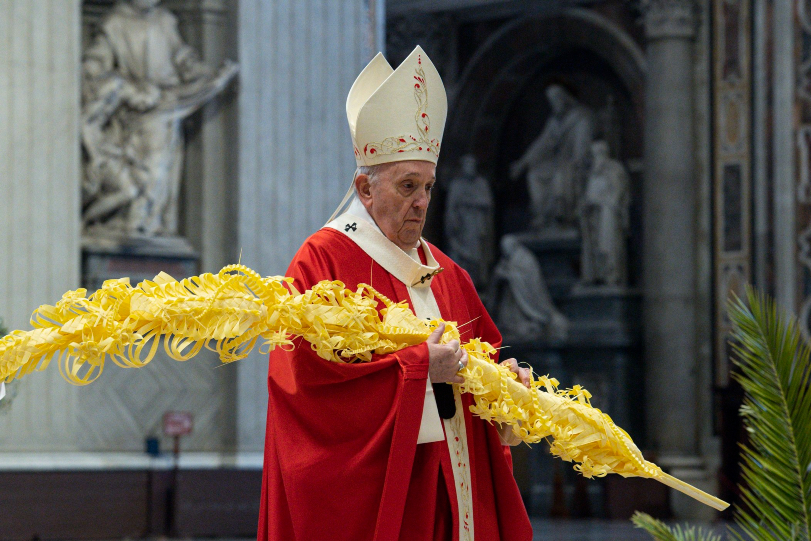 In a brief meditation for the Angelus following the Palm Sunday Mass, Pope Francis reflects on God’s action during the pandemic, and our response. He offers prayers for all victims of violence, “especially those of this morning’s attack in Indonesia in front of the Cathedral of Makassar”.

“We have begun Holy Week. For the second time we will live it within the context of the pandemic,” said Pope Francis in remarks ahead of Sunday’s Angelus. Last year, he said, “we were mostly shocked; this year we are more sorely tried. And the economic crisis has grown severe.”

In the grave situation we are facing, what is God doing? the Pope asked. He responded, “Jesus takes up the Cross.” The Pope explained that Jesus takes upon Himself not only the physical and psychological evils that accompany the pandemic, “but above all spiritual evil” – because, he said, “the Evil One takes advantage of crises in order to sow distrust, despair, and strife.”

Mary shows us the way

How, then, are we to respond? the Pope continued. His answer? “The Virgin Mary, the Mother of Jesus, who is also His first disciple shows us the way: She followed her Son.”

Mary, said Pope Francis, “took upon herself her own share of suffering, darkness and bewilderment, and walked the path of the Passion, keeping the lamp of faith burning in her heart.”

Pope Francis said, “With God’s grace, we too can make this journey.” And he encouraged us, in our own “daily way of the Cross,” not to pass by our brothers and sisters in difficulty, but to “allow our hearts to be moved by compassion and draw near” to them.

Like Simon the Cyrene, who was forced by the Romans to help Jesus carry the Cross, we too might ask, “Why me?” the Pope said. But it is precisely in that moment, he added, “that we will discover the gift that we have been given, without our own merit.”

The Holy Father concluded his reflection with a prayer that our Lady might help us, because, he said, “she always goes before us on the path of faith.”

Before the recitation of the Marian prayer, Pope Francis prayed for all the victims of violence. He made special note of Indonesia, saying “especially those of this morning’s attack in Indonesia, in front of the Cathedral of Makassar”. The Cathedral was rocked by a suicide bombing on Sunday which, early reports say, wounded many people including church workers and worshippers.