Pope at Angelus: Recognizing Jesus as the living God is secret to happy life

Pope at Angelus: Recognizing Jesus as the living God is secret to happy life 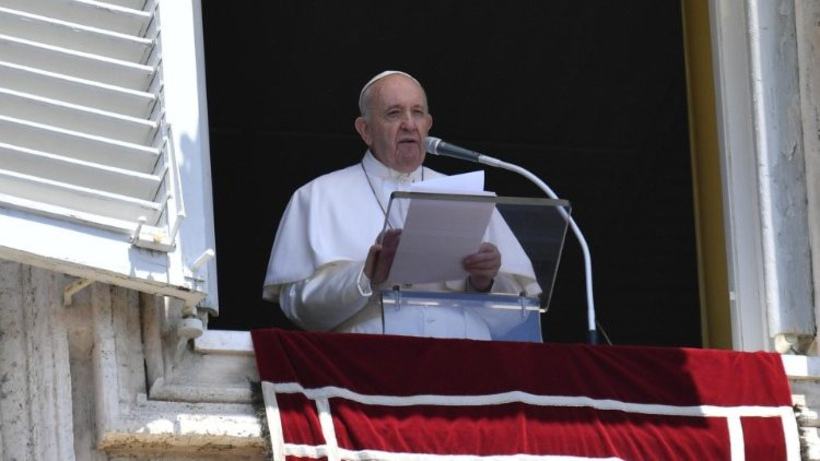 At the Angelus prayer on the Solemnity of Saints Peter and Paul, Pope Francis invites Christians to make their lives a gift and to recognize Jesus as the living God.

During his Angelus on the Solemnity of Saints Peter and Paul, Pope Francis reflected on the life of Saint Peter, contrasting his deliverance from prison by an angel in Monday’s First Reading (Acts 12: 1 – 11), with his later imprisonment in Rome and martyrdom.

Pope Francis asked: “How come he (Saint Peter) was first spared the trial, and then not?”

Making our lives a gift

Pope Francis explained that the Lord granted Saint Peter “many graces and freed him from evil” in the same way that He does to us.

Even though we often go to God “only in moments of need”, he pointed out, “God sees beyond and invites us to go further, to seek not only His gifts, but Him; to entrust to Him not only problems, but life.”

In this way, God “can finally give us the greatest grace, that of giving life”, because the “most important thing in life is to make life a gift.”

Pope Francis pointed out that “God desires making us grow in giving” as “only in this way can we become great.”

Recalling the example of Saint Peter, Pope Francis said that “he did not become a hero because he was freed from prison, but because he gave his life there.”

Saint Peter “transformed a place of execution into the beautiful place of hope in which we find ourselves,” said the Pope.

A blessed and happy life

Citing the Gospel reading from Mt 16: 13 – 19, the Holy Father said that Jesus’s question to his apostles about his identity and Peter’s response changed the life of Saint Peter.

Pope Francis explained that Jesus’s word “blessed” means “happy”. Jesus said “you are blessed” in response to Peter who proclaimed Jesus as “the living God”.

The secret of a blessed and happy life therefore, is “recognizing Jesus, but Jesus as the living God,” he said.

The place of Jesus in our lives

Pope Francis explained that Simon’s name was changed to “rock” when Jesus said: “You are Peter, and on this rock I will build my church” (Mt. 16: 18). This was not because Peter was a “solid and trustworthy man” rather, because “Jesus is the rock on which Simon became stone.”

He added that “it is not important to know that Jesus was great in history” nor is it important “to appreciate what He said or did.” Rather, what matters is “the place I give Him in my life.”

In this regard, the Pope invited us to ask ourselves: “How do I arrange my life? Do I think only of the needs of the moment or do I believe that my real need is Jesus, who makes me a gift? And how do I build life, on my capacities or on the living God?”

In conclusion, Pope Francis prayed that Our Lady, who entrusted everything to God, might help us to put Him at the center of our daily lives.