Pope at Angelus reminds us to cherish our baptismal identity

Pope at Angelus reminds us to cherish our baptismal identity 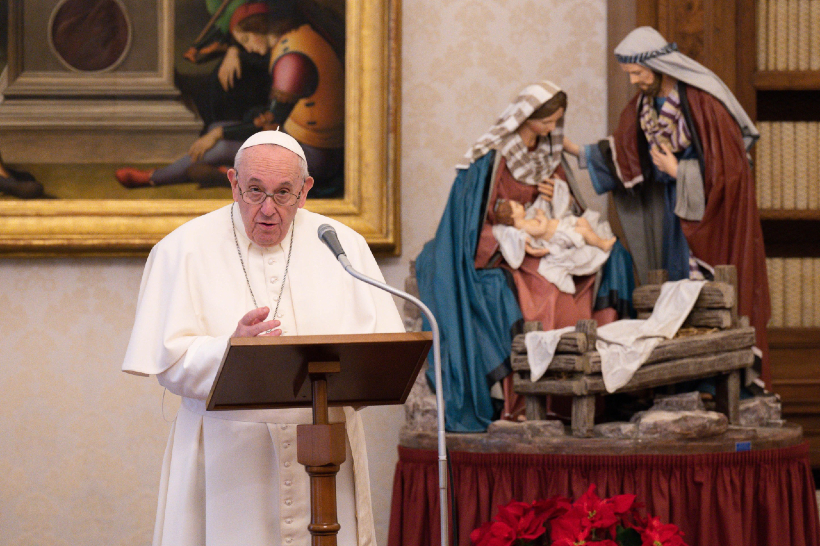 Pope Francis celebrates the Baptism of the Lord inviting the faithful to celebrate the date of their Baptism, the day they received Holy Spirit and became the beloved children of God.

Marking the feast of the Baptism of the Lord, Pope Francis reflected on the Liturgy of the day that tells of how Jesus’ pubic life began.

Speaking from the Apostolic Library during the Sunday Angelus, the Pope noted that after the feast of the Epiphany, the Liturgy takes a leap of some 30 years, “hidden” time spent by Jesus  with his family, obeying his parents, studying and working.

All of the evangelists, he said, narrate his public life that they say spanned about three years.

It is striking, he said, that the Lord spent most of his time on earth living an ordinary life, without standing out.

“It is a fine message for us: it reveals the greatness of daily life, the importance in the eyes of God of every gesture and moment of life, even the most simple and hidden,” he said.

After these 30 years of hidden life, the Pope continued, Jesus’ public life begins with the baptism in the River Jordan.

He explained that John’s baptism consisted in a penitential rite: “it was a sign of one’s willingness to convert, asking forgiveness of one’s sins. Jesus surely did not need it.”

The Lord does not save us from on high

And although John the Baptist tries to stop him, the Lord insists, he continued, because He wants to be with the sinners: “for this reason he gets in line with them and does the same thing they do. He goes down into the river to immerse himself in the same condition we are in.”

On the first day of his ministry, the Pope said, Jesus thus offers us his “programmatic manifesto”, telling us that “He does not save us from on high, with a sovereign decision or act of force, but by coming to meet us and taking our sins upon himself.”

This is how God conquers worldly evil, he said, “by humbling himself and taking charge of it.

This is also the way, he emphasized, that we can lift up others: “not by judging, not by suggesting what to do, but by becoming neighbours, empathizing, sharing God’s love.

“Closeness,” he reiterated, “is God’s style with us!”

Pope Francis went on to explain that after this act of compassion by Jesus, another extraordinary thing happens: “the heavens open and the Trinity is finally revealed.”

As the evangelist Mark tells us (Mk 1:10), the Holy Spirit descends from the heavens like a dove and the Father says to Jesus: “Thou art my beloved Son; with thee I am well pleased.”

God, the Pope explained, “manifests himself when mercy appears, because that is his face.”

This episode shows us how Jesus becomes the servant of sinners and is proclaimed the Son, he continued: “He lowers himself upon us and the Spirit descends upon him.”

“Love calls for love”, the Pope said, and this applies to us: “in each act of service, in every work of mercy we perform, God manifests himself and sets his gaze upon the world.”

This reveals to us the Pope explained that even before we do anything, our life was marked by mercy and it was laid upon us.

And this, he said, happened on the day of our Baptism: “There, we were immersed in the love of Christ who died and rose for us. There, we received the gift of the Holy Spirit. There, the Father said to each one of us, as he did to Jesus: Thou art my beloved Son”.

God’s mercy is so great, the Pope continued, that even those who are not baptized receive it and can trust in the resurrection if their hearts are open.

“We may think the wrong things make many mistakes,” the Pope concluded, “but we  always remain God’s beloved children. It is our deepest identity: “May Our Lady, to whom we now pray, help us to cherish our baptismal identity, which lies at the base of faith and life.”

Appeal and after Angelus

After the Angelus Prayer Pope Francis appealed for reconciliation in the United States in the wake of the assault on Congress on 6 January and said he is praying for the five people who lost their lives in the violence.

Prayers for all babies receiving Baptism

He went on to say that this year he is unable to preside at the traditional Baptism ceremony in the Sistine Chapel on the feast of the Baptism of the Lord due to the covid-19 pandemic.

“I wish, however, to assure my prayers for the children, their parents, their godparents” who would have been present for the ceremony, the Pope said: “I extend my prayers to all the children who are receiving Baptism in this period: they are receiving the Christian identity, the grace of forgiveness and of redemption. May God Bless them all!”

Pope Francis ended his address reminding the faithful that tomorrow marks the start of Ordinary Time according to the liturgical year and invited them to never tire of invoking the light and the force of the Holy Spirit.

“It is love that changes everything”, he said, “when you do ordinary things with love they become extraordinary, and if we are open to the Spirit, the Spirit will inspire our everyday thoughts and actions.”