Pope at Angelus: The Lord holds us like a Father does his child

Pope at Angelus: The Lord holds us like a Father does his child 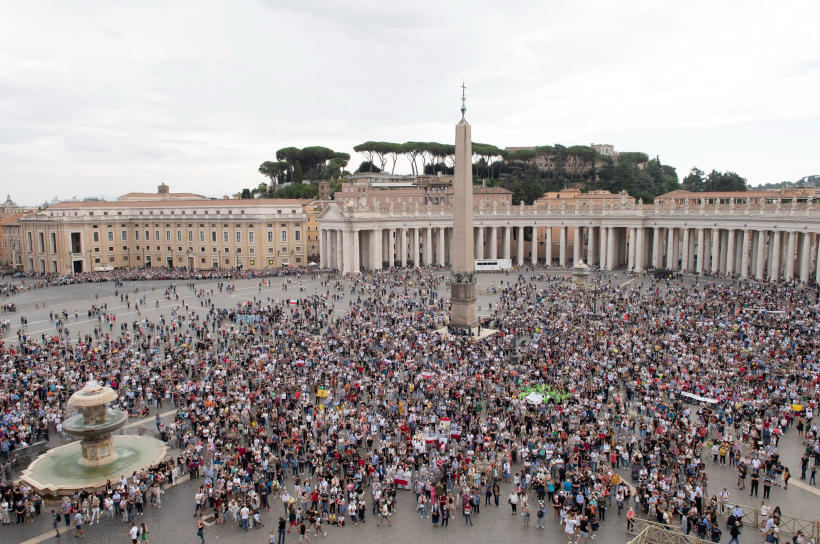 Pope Francis addresses the faithful gathered in St Peter’s Square and urges them to accept being small in order to grow big.

Reflecting on the day’s liturgy, as he addressed the faithful gathered in St Peter’s Square for the Sunday Angelus, Pope Francis noted that Jesus is unusually indignant in the Gospel reading. What is most surprising about His indignation, continued the Pope, is that it “is not caused by the Pharisees who test Him with questions about the legality of divorce, but by His disciples who, in order to protect Him from the crowd of people, scold some children who are brought to Jesus”. The Pope asked, Why does the Lord gets angry with those who take the children away from Him rather than with those who argue with Him?

The little are in need

The Pope recalled that Jesus teaches that “it is precisely the little ones, that is, those who depend on others, who are in need and cannot give back, who are to be served first”. Those who seek God find Him there, in the little ones, in those in need, explained the Pope.

Today the Lord takes up this teaching and completes it, adding “whoever does not receive the kingdom of God as a child receives it will not enter it” (Mk 10:15). The Pope explained that the novelty lies here: “The disciple must not only serve the little ones, but recognise himself as a little one”. Knowing oneself to be small is indispensable for welcoming the Lord, added the Pope.

The Pope went on to say that it is in recognising oneself as small that we then become big. Not so much in success, he continued, “but above all in moments of struggle and fragility”. The mask of superficiality is falling and our radical fragility is re-emerging, continued Pope Francis, describing it as “our treasure” because “with God fragility is not an obstacle, but an opportunity”.

In fact, it is precisely in fragility that we discover how much God cares for us, continued the Pope. “Contradictions, situations that reveal our fragility are privileged occasions to experience his love”, said the Pope, adding that “those who pray with perseverance know it well: in moments of darkness or loneliness, God’s tenderness towards us becomes – so to speak – even more present”. It gives us peace, added the Pope, bringing his discourse to an end. “It makes us grow”, he said. Finally, Pope Francis stressed that in prayer, “the Lord holds us close to Himself, like a father with his child”, and this, he concluded, “is how we become great”.