Pope at Angelus: The merciful gaze of Jesus leads to conversion

Pope at Angelus: The merciful gaze of Jesus leads to conversion 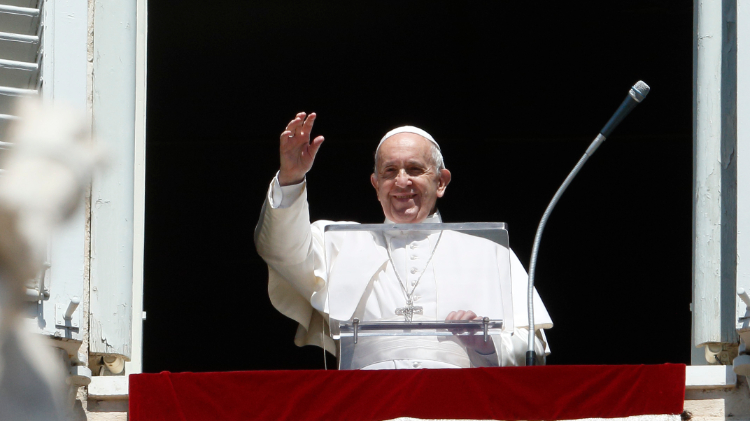 Pope Francis says Jesus’ merciful gaze rests upon us even before we ourselves realize our need for salvation.

At the Angelus on Sunday, Pope Francis reflected on the Gospel account of Jesus’ meeting with Zacchaeus in Jericho.

Zacchaeus was a tax collector, and for this reason was considered a public sinner. When he heard that Jesus was coming through Jericho, he “wanted to see who Jesus was” – he didn’t expect to meet Him, Pope Francis said, “but was curious: he wanted to see this person about Whom he’d heard such wonderful things”. Because he was a short man, Zacchaeus climbed a tree to get a look at the Lord.

The merciful gaze of Jesus

When Jesus approached, He looked up and saw Zacchaeus. “This is important” the Pope said. “The first gaze is not that of Zacchaeus, but of Jesus”. Pope Francis explained that “the merciful gaze of the Lord reaches us before we ourselves realize our need of being saved”. And, he said, it is with this Divine gaze that Zacchaeus’ miraculous conversion begins. Jesus did not “rebuke him or give him a sermon”, the Pope said, but told Zacchaeus that he must stay in his house. “He ‘must’”, the Pope said, “because it is the will of the Father”.

In the Gospel, we read that the people murmured against Jesus because he went to the home of a sinner. “We too might have been scandalized by this behavior of Jesus,” the Pope said. But the contempt the people had for Zacchaeus only isolated him, and prompted him to sin even more. “God, on the other hand, condemns the sin, but seeks to save the sinner”, Pope Francis said. “Those who have never felt God seeking them, find it difficult to grasp the extraordinary greatness of the actions and words with which Jesus approaches Zacchaeus”.

It is the welcome and attention Jesus shows to Zacchaeus that lead to his conversion, the Pope continued. “In an instant, he realized how petty was a life consumed by money”. When Jesus came to him, Zacchaeus was able “to see everything with different eyes, and even with a little bit of the tenderness with which Jesus looked on him”. Where before he was greedy, now he is generous; before he wanted to gain more, now he was happy to give. “Encountering Love,” the Pope said, “discovering that he is loved despite his sins, [Zacchaeus] becomes capable of loving others”, turning money from a source of sin, to “a sign of solidarity and communion”.

Concluding his reflection, Pope Francis prayed, “May the Virgin Mary obtain for us the grace to always feel the merciful gaze of Jesus upon us, in order to meet with mercy those who have made mistakes, so that they too can welcome Jesus, Who ‘has come to seek and to save what was lost’”.