Pope at Audience: Be God’s instruments of healing, like Apostles

Pope at Audience: Be God’s instruments of healing, like Apostles 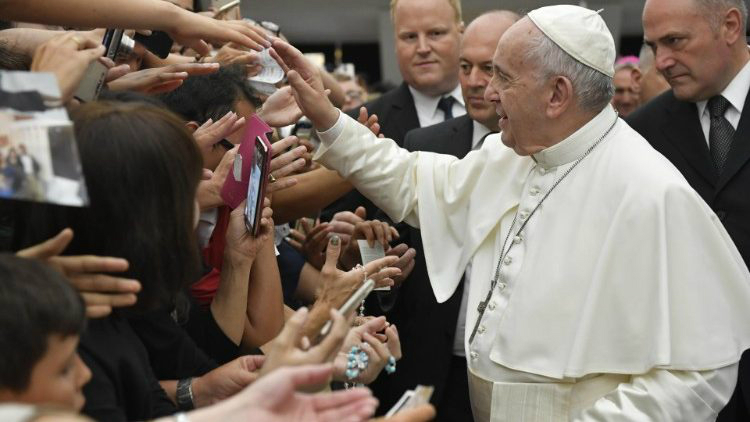 Pope Francis resumes his weekly General Audiences by continuing his catechesis on the Acts of the Apostles, urging the faithful trust in the Lord, and act in His name.

In his catechesis on the Acts of the Apostles, Pope Francis focused this week on the first account of healing in the Book of Acts (Acts 3:3-6): Peter and John’s healing of the Paralytic.

“In the Acts of the Apostles”, began Pope Francis, “the preaching of the Gospel does not only rely on words, but on concrete actions that bear witness to the truth of the proclamation”. These, said the Pope, are wonders and signs, which “confirm” the work of the Apostles, “showing that they act in the name of Christ.”

Neither silver nor gold

Pope Francis explained that the beggar, in meeting the apostles, “does not find money, but the name that saves: Jesus Christ the Nazarene”.

Peter then orders the paralytic to stand and, in taking his right hand, helps him up.

Through this, said Pope Francis, Peter personifies the Church, who “sees those who are in difficulty, does not close her eyes, and knows how to look humanity in the face in order to create meaningful relationships, bridges of friendship and solidarity instead of barriers.”

Acting in the name of Jesus

Pope Francis then continued his comparison, explaining that the apostles look at the beggar and say “look at us”. They reach out to him, they lift him up and they heal him. This, said the Pope, is what Jesus does with all of us. Through bad times, in moments of sin, in moments of sadness, “Jesus says to us ‘Look at me: I am here!'” Therefore, said the Pope, “Let us take the hand of Jesus and allow ourselves to be lifted up”.

Finally, the Pope explained that Peter and John teach us not to trust in the means used to heal, which he said, “are also useful”. Rather, trust in “the true wealth that is the relationship with the Risen One.” “Let us not forget”, concluded the Pope, “that it is Jesus’ hand that through our own helps others to rise”.