Pope at Audience: Being poor in spirit is true freedom

Pope at Audience: Being poor in spirit is true freedom 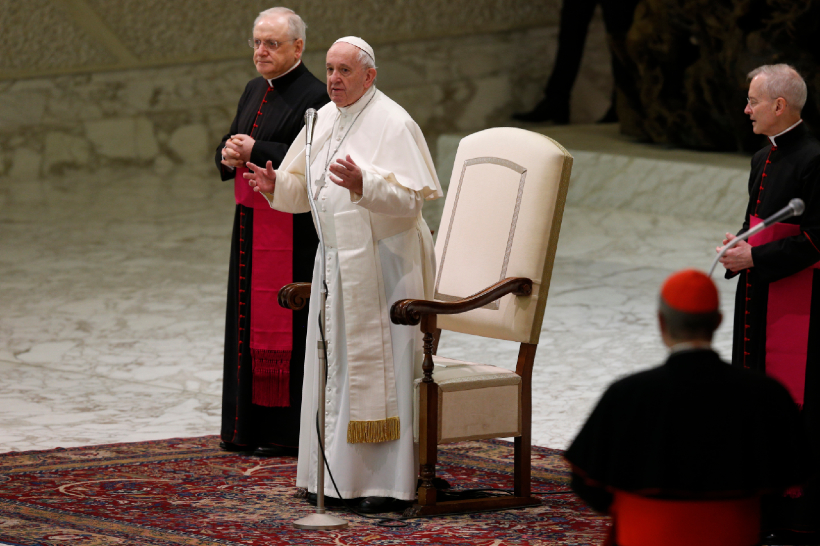 Pope Francis reflects on the Beatitude “Blessed are the poor in spirit, for theirs is the kingdom of heaven” as he continues his catechesis on the Beatitudes during the weekly General Audience.

Jesus’ “way to happiness”, the Pope said, begins with a “paradoxical proclamation… a strange object of bliss”. So we must ask ourselves, What is meant by the word “poor”? Matthew’s use of the expression “poor in spirit” shows us that Jesus is not talking simply about economic poverty, but of a spiritual understanding of our poverty. “Those who are ‘poor in spirit’”, the Pope said, “are those who are and who feel themselves to be poor, beggars, in the depths of their being”.

This is contrary to the message of the world, which tells us we have to make something of ourselves. This attitude leads to “loneliness and unhappiness” because it sets us in competition with others so that we “live in obsessive concern for [our own] ego”. Jesus, though, tells us that “to be poor is an occasion of grace, and He shows us the way out” of the fatigue caused by trying to hide our limitations and failings.

We are already poor

Pope Francis said, though, that we must remember that we “don’t have to transform ourselves to become poor in spirit because we are already poor! We are all poor in spirit, beggars”.

The kingdoms of the world, possessed by those who have wealth and comfort, are kingdoms that end. “The power of human beings, even the greatest empires, pass and disappear”, the Pope said. On the contrary, it is the one “who knows how to love the true good more than himself” who truly reigns. This, he said, “is the power of God”; and this is how Christ shows Himself to be powerful: “He knew how to do what the kings of the earth do not: to give His life for human beings. And this is true power: the power of fraternity, the power of charity, the power of love, the power of humility. This is what Christ did”.

And, the Pope continued, “true freedom lies in this: the one who has this power of humility, of service, of fraternity is free. The poverty praised by the Beatitudes lies at the service of this freedom”. He concluded his catechesis by saying “we must always seek this freedom of the heart, which has its roots in the poverty of ourselves”.