Pope at Audience: Even if Church is persecuted, it never tires of welcoming

Pope at Audience: Even if Church is persecuted, it never tires of welcoming 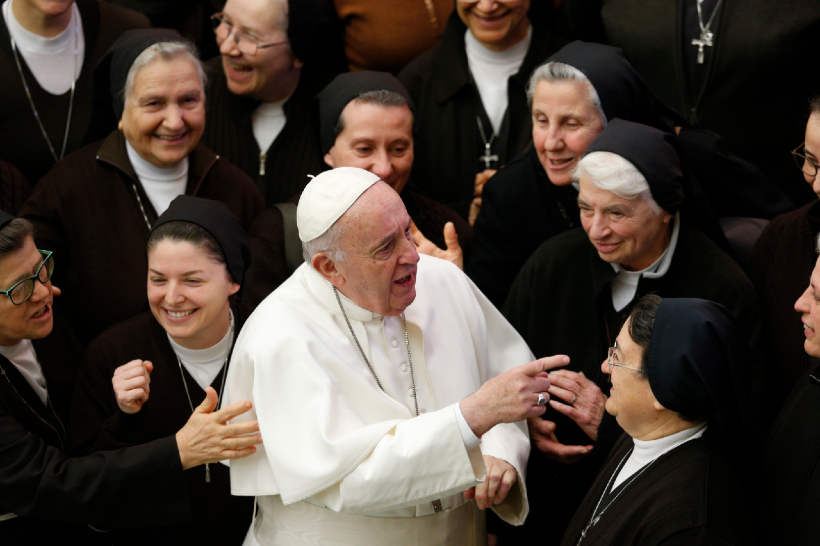 Pope Francis, concluding his catechesis on the Acts of the Apostles tells pilgrims that even if the Church is persecuted and chained, it never tires of welcoming with a motherly heart.

Joining pilgrims in the Paul VI hall on Wednesday, Pope Francis concluded his catechesis on the Acts of the Apostles with the last missionary stage of Saint Paul; his journey to Rome.

The Pope told those gathered for the weekly General Audience that “Paul’s journey, which was one with that of the Gospel, is proof that man’s journeys, if lived in faith, can become a space of transit for God’s salvation,… capable of transforming situations and opening up new paths.”

The power of God’s word can never be chained

The Pontiff noted that “Luke ends the Book of Acts not with Paul’s martyrdom but by describing his tireless proclamation of the Gospel, showing the power of God’s word which can never be chained.”

He went on to say that “Paul’s missionary journeys, culminating in this City, reveal the power of God’s grace to open hearts to the Gospel and its saving message.”

During his catechesis, Pope Francis recalled that “in Rome, Paul first of all meets his brothers and sisters in Christ, who welcome him and give him courage and whose warm hospitality makes one think of how much his arrival was awaited and desired.”

Despite his condition as a prisoner, said the Pope, “Paul could meet with notable Jews to explain why he was forced to appeal to Caesar and to speak to them about the kingdom of God. He tries to convince them about Jesus, starting from the Scriptures and showing the continuity between the newness of Christ and the ‘hope of Israel’.”

The Kingdom of God

The Pope continued by saying that, “Paul announces the kingdom of God and tries to open his interlocutors to faith in Jesus…”

“Since not everyone is convinced, said Pope Francis, “he denounces the hardening of the heart of God’s people, the cause of their condemnation and celebrates with passion the salvation of nations which show themselves to be sensitive to God and capable of listening to the word of the Gospel of life.”

At this point in the narrative, the Pope pointed out, “Luke concludes his work by showing us not the death of Paul but the dynamism of his sermon, of a Word that “is not chained”.

“Paul does not have the freedom to move but is free to speak because the Word is not chained – but is a Word ready to be sown with full hands by the Apostle, he explained.

A Church of welcome

Pope Francis said, that Paul does this “’with all frankness and without impediment’ in a house where he welcomes those who want to receive the proclamation of the kingdom of God and to know Christ. This house open to all hearts in search is the image of the Church which, though persecuted, misunderstood and chained, never tires of welcoming with a motherly heart every man and woman to proclaim to them the love of the Father who made himself visible in Jesus.”

At the end of the Audience, Pope Francis in greetings to Arabic speaking pilgrims said, “Don’t hold back the fear of making mistakes and fear of taking new paths, because our poverty is not an obstacle, but a tool…because God’s grace loves to manifest itself precisely in weakness.”