Pope at Audience: Hypocrisy jeopardises the unity of the Church

Pope at Audience: Hypocrisy jeopardises the unity of the Church 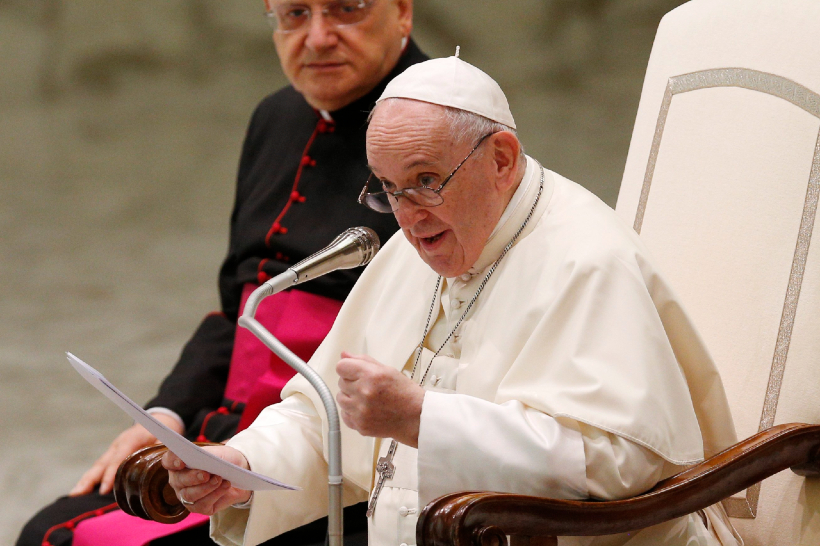 At the General Audience on Wednesday, Pope Francis warns about a type of “formalism” which can lead to hypocrisy, and in turn threatens the unity of the Church.

Pope Francis continued his commentary on St Paul’s Letter to the Galatians at Wednesday’s General Audience, highlighting the dangers of a purely formal adherence to the Law.

The Holy Father began his reflection with a consideration of an episode recounted by St Paul, where the Apostle reproached St Peter for his hypocritical behaviour.

St Peter himself had shown that Gentile Christians were not bound to observe every aspect of the Jewish Law when he ate with Gentiles, contrary to the prescriptions of the Law.

Later, however, he refused to eat with them, for fear of being criticised by those Jewish Christians who believed it was still necessary to obey all of the prescriptions of the Mosaic code.

St Paul saw that this was a serious fault because St Peter’s hypocrisy was causing an “unjust division” in the early Christian community.

Fear of the truth

Hypocrisy, the Pope said, “can be called the fear of the truth,” a feeling that “it is better to pretend than to be yourself” that can “suffocate the courage to openly say what is true” in every circumstance.

He warned that hypocrisy flourishes “in an environment where interpersonal relations are lived under the banner of formalism.”

The Bible, however, shows us examples of holy men and women who refuse to pretend. Pope Francis pointed to Eleazar who, during the time of the Maccabees, refused to pretend to eat meat sacrificed to idols, even at the cost of his life.

In the New Testament, the Pope noted, Jesus often condemned hypocrites who appeared righteous on the outside, but inwardly were filled with vice.

Hypocrites, said Pope Francis, “are people who pretend, flatter, and deceive because they live with a mask over their faces and do not have the courage to face the truth.”

He warned, “They are not capable of truly loving.” And he noted that, although we see hypocrisy in the workplace, in politics, and elsewhere, “hypocrisy in the Church is particularly detestable.”

He recalled the words of the Lord, who said, “Let what you say be simply ‘Yes’ or ‘No’; anything more than this comes from evil.”

Pope Francis said that to act otherwise “means jeopardising the unity of the Church, that unity for which the Lord Himself prayed.”