Pope at Audience: Liturgy and prayer unite us to Christ

Pope at Audience: Liturgy and prayer unite us to Christ 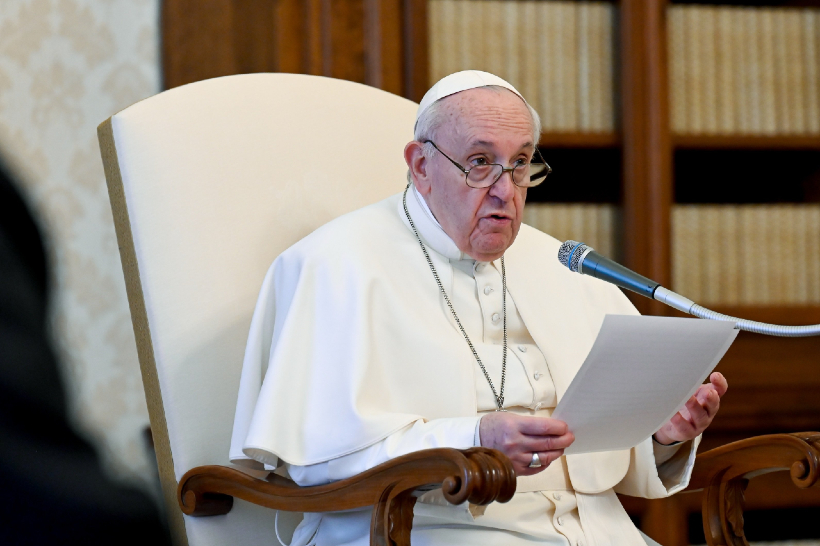 Pope Francis continues his catechesis on Christian prayer at the weekly General Audience, and reflects on how liturgical prayer unites us to Christ.

Speaking from the library of the Apostolic Palace, Pope Francis held his Wednesday General Audience which was live-streamed to the faithful around the world.

In his continuing catechesis on Christian prayer, the Pope spoke about how the Church’s liturgical celebrations make Christ present in our lives.

He began by noting that Christian history is rife with movements which pushed liturgical rites aside.

“Often,” he said, “this tendency claimed the supposed greater purity of a religiousness that did not depend on external ceremonies, which were considered a useless or harmful burden.”

Many modern Catholics, he added, attend Mass on Sunday but feed their own spirituality through various personal devotions.

Pope Francis went on to say that the Church has made much progress in recent decades regarding the centrality of the liturgy in the life of faith.

Christian prayer, he said, is closely linked to concrete expressions of faith, such as Sacred Scripture, the Sacraments, and liturgical rites.

“In Christian life, the corporeal and material sphere may not be dispensed with, because in Jesus Christ it became the way of salvation,” he said.

Prayer based in liturgy

Liturgy, said the Pope, is more than just spontaneous prayer. “It is an act that founds the whole Christian experience and, therefore, also prayer. It is event, it is happening, it is presence, it is an encounter with Christ.”

He said Jesus Christ “makes himself present in the Holy Spirit through the sacramental signs.”

The Pope continued by saying the liturgy, by its very nature, invites us to participate fully, so that we might receive the grace God offers through it.

“Many Christian prayers do not originate from the liturgy,” he said, “but all of them, if they are Christian, presuppose the liturgy, that is, the sacramental mediation of Jesus Christ.”

Christ, he added, is present every time a Sacrament is celebrated.

Pope Francis said prayer is what allows us to interiorize Jesus’ sacramental presence. “What is external to us becomes part of us”, a reality expressed in the natural action of eating.

“The Mass cannot simply be ‘listened to’,” he pointed out, “as if we were merely spectators of something that slips away without our involvement. The Mass is always celebrated, and not only by the priest who presides over it, but by all Christians who experience it.”

Christ is the center

The Pope concluded his catechesis noting that Christ is the centre of the liturgy, and that every Christian is invited to participate wholeheartedly in the Sacraments.

“Life is called to become worship to God, but this cannot happen without prayer, especially liturgical prayer.”