Pope at Audience: Mary a woman of prayer and model for our prayer

Pope at Audience: Mary a woman of prayer and model for our prayer 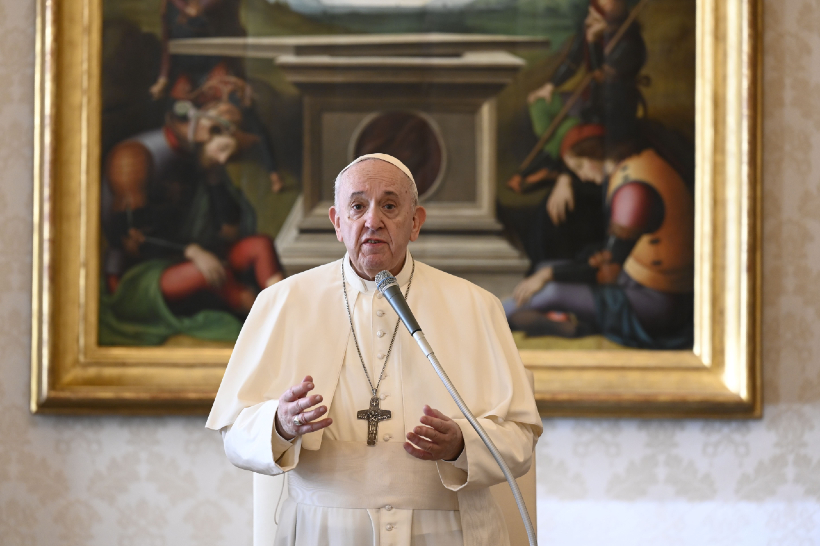 Pope Francis reflects on prayer and on how the Virgin Mary, who entrusted herself to God with docility, is a model for our own lives.

Pope Francis greeted the faithful on Wednesday morning, saying: “Today we meet the Virgin Mary as the prayerful woman.”

Continuing his catechesis on prayer during the weekly General Audience, which is currently streamed live from the Apostolic Library, the Pope upheld Mary as a model for our own life and prayer.

He recalled her in her youth, “the young girl of Nazareth wrapped in silence, in dialogue with God, who would soon entrust her with a mission.”

Although she was already full of grace and immaculate from the moment she was conceived, the Pope said, she knew nothing “of her surprising and extraordinary vocation and the stormy sea she will have to cross.”

“One thing is certain,” he said. “Mary belongs to a great host of the humble of heart whom the official historians never include in their books, but whom God used to prepare for the coming of His Son.”

Waiting for God’s will

Pope Francis went on to describe how Mary waited for God to take the reins of her path and guide her, and how she prepared, with great docility, “the grand events in which God takes part in the world.”

The Catechism, he said, recalls her constant and caring presence in the benevolent design of the Father throughout the course of Jesus’s life.

Mary was praying, Pope Francis recalled, when the Archangel Gabriel brought his message to her in Nazareth: “Her small yet immense ‘Here I am,’ made all of  creation jump for joy at that moment”. He said that trusting obedience was preceded throughout salvation history by many other trusting obediences, by so many people who were open to God’s will.

An attitude of openness

Pope Francis said there is no better way to pray than to place oneself in an attitude of openness: “Lord, what You want, when You want, and how You want”.

He said that this attitude allows many believers to face reality without getting upset when their days are filled with problems, “knowing that in humble love offered in each situation, we become instruments of God’s grace.”

Prayer, the Pope said, “knows how to calm restlessness, knows how to transform it into availability. “

“If in prayer we understand that each day given by God is a call, our hearts will then widen and we will accept everything. We will learn how to say: ‘What You want, Lord. Promise me only that You will be present every step of my way,’” he said.

Mother of God and Mother of the Church

Mary, the Pope said, prayerfully accompanied the newborn Church and through her openness to the power of the Holy Spirit, the Mother of God thus became the Mother of the Church.

“In the Virgin Mary, natural feminine intuition is exalted by her most singular union with God in prayer. This is why, reading the Gospel, we note that she seems to disappear at times, only to reappear for crucial moments: it was God’s voice that guided her heart and her steps where her presence was needed,” he said.

Saint Luke tells us that Mary “treasured all these things and pondered them in her heart,” he  continued, explaining, “Everything ends up in her heart so that it might pass through the sieve of prayer and be transfigured by it.”

The Mother keeps everything and brings it to her dialogue with God, Pope Francis concluded: “Someone has compared Mary’s heart to a pearl of incomparable splendour, formed and smoothed by patient acceptance of God’s will through the mysteries of Jesus meditated on in prayer. How beautiful it would be if we too could be a bit like our Mother!”