Pope at Audience: memories of trip to Bulgaria and North Macedonia

Pope at Audience: memories of trip to Bulgaria and North Macedonia 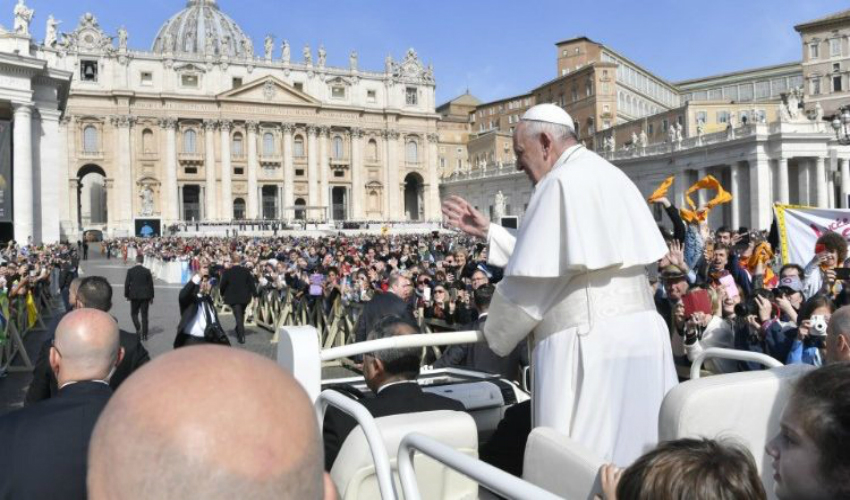 Pope Francis at the general audience in Rome’s St. Peter’s Square on May 8, 2019. (Vatican Media)

At this week’s Wednesday’s General Audience in St Peter’s Square, Pope Francis reflects on his Apostolic journey to Bulgaria and North Macedonia.

The Pope began by saying how, in Bulgaria, he was “guided by the living memory of Saint John XXIII”, who spent nearly ten years in the country as Apostolic Delegate. The motto chosen for the Bulgaria leg of the trip was the title of Pope John XXIII’s encyclical, “Pacem in Terris”. Inspired by this motto, Pope Francis said he had “invited everyone to walk on the path of brotherhood”, and mentioned his meeting with the Patriarch of the Bulgarian Orthodox Church and Members of the Holy Synod. “As Christians, our vocation and mission is to be a sign and instrument of unity”, he said.

Bulgaria and Saints Cyril and Methodius

The Pope also mentioned the Saintly Brothers Cyril and Methodius, evangelizers of Bulgaria. They were of Greek origin, but they used “their culture creatively to transmit the Christian message to the Slav peoples”, said Pope Francis. “Even today there is a need for passionate and creative evangelizers”, he added, “so that the Gospel may reach those who do not yet know it and may irrigate again the lands where ancient Christian roots have dried up”.

The second stop on the Pope’s three-day Apostolic journey was to North Macedonia. There he said “the strong spiritual presence of Mother Teresa of Calcutta” accompanied him. Mother Teresa was born in Skopje, the present-day capital of North Macedonia, in 1910. In this small but strong woman “we see the image of the Church in that country”, said Pope Francis, noting that he had prayed at Mother Teresa’s Memorial, and blessed the first stone of a shrine dedicated to her.

North Macedonia and the young

Pope Francis explained how, with this visit, his intention was to encourage what he called North Macedonia’s “traditional capacity to host different ethnic and religious affiliations”, as well as the country’s “commitment to welcoming and helping a large number of migrants and refugees”.

This is a “young country from an institutional point of view”, said the Pope. Which is why his meeting with young people was so significant. Pope Francis said he invited them “to dream big and get involved”, just like the future Mother Teresa, “listening to the voice of God”, who speaks to us in prayer, and responding concretely to “our needy brothers and sisters”.