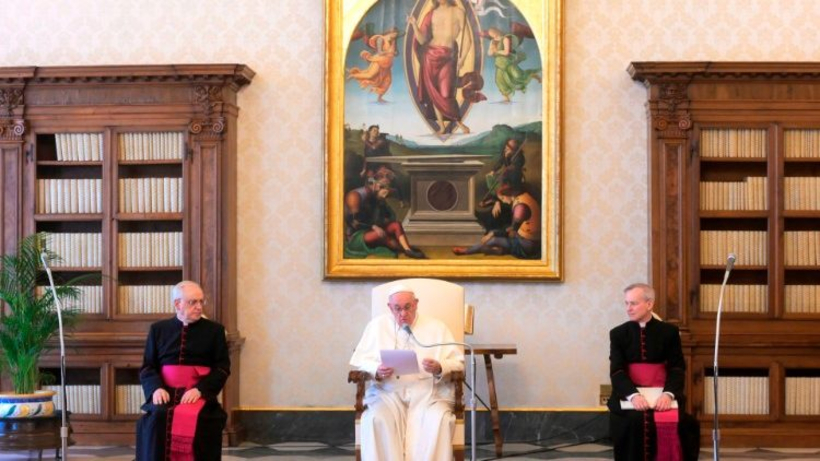 Pope Francis continues his catechesis on prayer, turning his thoughts to the prayer of the just.

Pope Francis began his General Audience on Wednesday telling the faithful that “God’s plan regarding humanity is for the good”, even though “we experience the presence of evil” in our everyday lives.

The Pope recounted two stories from the book of Genesis that describe the emergence and expansion of evil and sin across successive generations.

The first, in the first chapters of Genesis, is the story of Adam and Eve. In doubting God’s intentions “their hearts yield to the temptation of the evil one”, said the Pope. However, “the experience goes in the opposite direction”: “their eyes are opened and they discover that they are naked”.

The second, from Genesis chapter 4, is the story of Cain and Abel. “Cain is envious of his brother” and sees him as a rival, said the Pope. “Evil enters within his heart and Cain does not succeed in controlling it”, leading to his murder.

Pope Francis went on to explain that though Cain’s descendants develop “arts and crafts”, “violence develops as well”.

We too still experience the presence of wickedness in the world, said the Pope.

Pope Francis then went on to recount a third account in the Bible. He described it as one that is “less apparent, humbler and devout, that represents the redemption of hope”. It is a story involving Abel, Seth, Enoch and Noah, who acted humbly and prayed to God with sincerity.

The peacemaking power of prayer

Pope Francis described these men, “who pray in the first pages of the Bible” as “peacemakers”.  He explained that when prayer is authentic, it “liberates from the instinct toward violence”. Authentic prayer is “a gaze directed toward God, so that He might return to take care of the human heart”, said the Pope, adding that “prayer cultivates flowerbeds of rebirth in places where human hatred was only capable of sowing a desert”.

Prayer is a seed of life and of dialogue with God

Pope Francis then told of a story he had heard regarding a man, “a head of government” of the past who proclaimed himself an atheist.

He said “He had no religious sense in his heart,” but he remembered listening to his grandmother praying when he was a child. “At a difficult time in his life,” the Pope continued, “that memory came back to his heart and he began to pray with the words used by his grandmother.”

There, the Pope said, “he found Jesus; prayer is a chain of life”.

Taking his cue from this story he said prayer is a seed of life and that is why it is so important to teach children to pray.

Saying it gives him pain to see children who do not know how to make the sign of the cross,” the Pope urged parents to teach their children to pray: “Then, perhaps, they can forget, take another path; but that one remains in their hearts, because it is a seed of life, the seed of dialogue with God.”

Pope Francis explained that for this reason throughout history, righteous men and women of prayer – often misunderstood or marginalised – have ceaselessly offered up intercession for the world, invoking God’s power to bring about healing and growth. “The world lives and grows thanks to God’s power that these servants of His attract through their prayer”, said the Pope.

He concluded his Catechesis by saying that it is through these servants of God that His path and story are “passed down to the ‘remnant’ of humanity”, who have asked that He “transform their hearts of stone to hearts of flesh”.