Pope at Audience: the Beatitudes are a message for humanity

Pope at Audience: the Beatitudes are a message for humanity 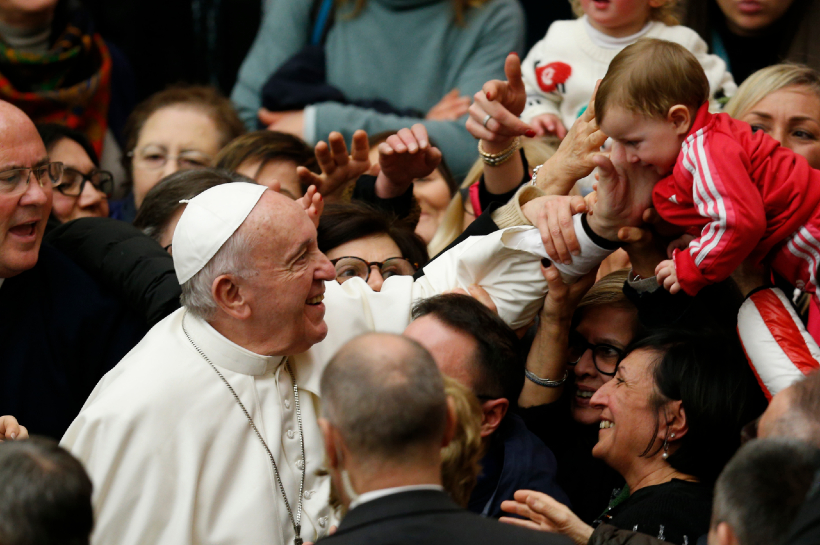 Inaugurating a new cycle of catechesis dedicated to the Beatitudes, Pope Francis reflects on Jesus’ invitation to conduct a life of humility, poverty, and mercy.

Pope Francis said that in order to give Himself to us, God often chooses “unthinkable” paths that point us beyond our “limitations, tears, and failures,” towards that Paschal joy born of Christ’s own passage from death to life.

Speaking to the pilgrims gathered in the Paul VI Hall for the Wednesday General Audience, he reflected on the Sermon on the Mount pronounced by Jesus who, he said, “enlightened” the lives of believers and also of many non-believers.

“It is difficult,” the Pope said, not to be touched by these words, and he encouraged the faithful to understand and welcome them “ever more fully” because “they contain a kind of Christian identity card”.

The proclamation of the Beatitudes

The Pope explained how the proclamation of the message came about: When He saw the crowds Jesus went up the “sweet slope” surrounding the Lake of Galilee, sat down and addressed the disciples proclaiming the Beatitudes.

“The message is addressed to the disciples, but there are crowds stretching to the horizon, there is all humanity. It is a message for all humanity,” he said.

The “mountain”, the Pope continued, recalls the one in Sinai, where God gave Moses the Ten Commandments. However this time, he said, the setting is not that of a “terrible storm”, but of a place in which the “sweet power” of the Good News is in the air.

Thus, Pope Francis said, Jesus began to teach a new law that calls us to be poor, to be meek, to be merciful.

These “new Commandments”, he added, are much more than norms: “In fact, Jesus does not impose anything, but reveals the path to happiness,” repeating the word ‘blessed’ eight times.

Pope Francis explained that each Beatitude is composed of three parts: the opening word “Blessed” followed by the situation in which those who are called blessed find themselves – poor in spirit, mourning, thirsting for justice – and finally the reason for which they are blessed.

“There are eight Beatitudes and it would be nice to learn them by heart and to repeat them in order to keep this law that Jesus gives us in our mind and in our hearts,” he said.

He highlighted that the reason for Beatitude is not to be found in one’s present situation, but in the new condition that those who are blessed receive as a gift from God: “For theirs is the kingdom of heaven”, “for they will be comforted”, “for they will inherit the land” and so on.

A condition of grace

As for the “reason” for happiness, the Pope noted that Jesus often uses passive verbs like “they will be satisfied”, “they will be shown mercy”, “they will be called children of God”; saying that the Beatitudes teach that we are blessed not by our present situation, but rather by the new condition that is ours by God’s grace

The Pope went on to dwell on the word “Blessed”, saying that in its original meaning it  does not indicate someone “with a full belly or who is doing well.” He explained that it refers to a person who finds him or herself in a state of grace and who is going forward on the path indicated by God with patience, poverty, service towards others, consolation.

“He or she who goes forward on that path is happy, will be blessed,” he said.

Reiterating that the Beatitudes “always lead to joy”, the Pope invited those present to take the Gospel of Matthew in hand and read chapter 5, verse 1 to 11, “perhaps a couple of times during the week, in order to understand this beautiful and secure path to happiness that the Lord proposes to us.”

At the end of the audience, Pope Francis greeted the groups of pilgrims present in various languages, and reminded those from Poland that on Sunday, on the Solemnity of the Presentation of the Lord, the Day for Consecrated Life is celebrated in their country and he asked for prayers:

“Let us pray for the religious who dedicate themselves to God and to their brothers and sisters in daily service, according to their charism, so that they may always be faithful witnesses of Christ’s saving love. Let us also pray for new vocations to the consecrated life.”