Pope at Audience: True freedom flows from the Cross of Christ

Pope at Audience: True freedom flows from the Cross of Christ 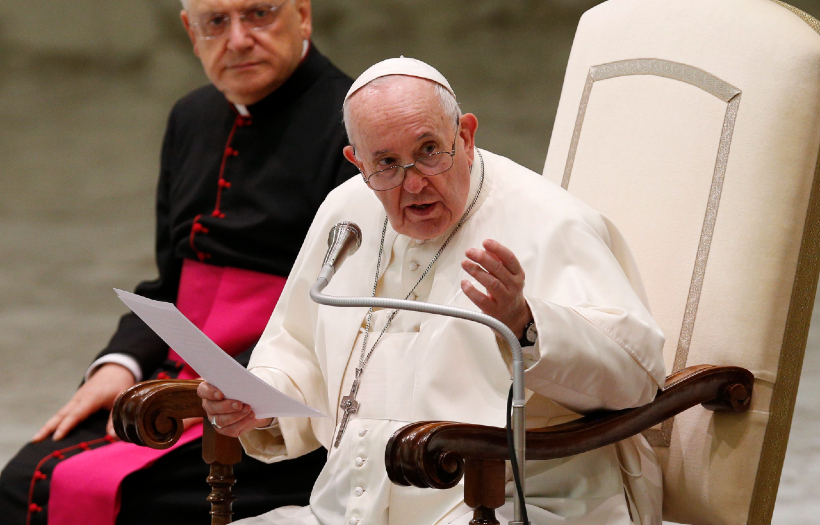 In his weekly General Audience, Pope Francis continues his reflection on St. Paul’s Letter to the Galatians, exploring the concept Christian freedom and how Christ, the Truth, achieved it in His supreme act of love on the Cross.

Christian freedom is the gift of God based on the truth of Jesus, who revealed the depth of God’s love in His supreme sacrifice on the Cross. This freedom is the way to happiness, Pope Francis said in his General Audience of 6 October at the Vatican’s Paul VI Hall.

Starting from the common concept of freedom, the Holy Father explained that we appreciate freedom only when we lose it. For many, freedom is an acquired right.

However, Christian freedom, as St. Paul explains to the Galatians, is a gift. The Apostle of the Gentiles feels pained at seeing Christians who, after having known and accepted the truth of Christ and His liberating presence, move to the slavery of sin, legalism, and so forth, by allowing themselves to be attracted by deceptive proposals.

Even Christians today, the Pope points out, seek refuge in legalism and casuistry.  St. Paul thus urges his Christians to remain firm in and guard this freedom that they had received with baptism, as he is aware that there were some “false brothers” who wanted to bring them into bondage.

“A proclamation that would preclude freedom in Christ,” the Pope says, “would never be evangelical.” It would perhaps be pelagian, jansenist or something like that but not evangelical. “You can never force in the name of Jesus. You cannot make anyone a slave in the name of Jesus who makes us free,” the Pope stresses, adding, “Freedom is a gift given to us in baptism.”

The teaching of St. Paul on freedom, the Pope continued, is in line with what Jesus says in John’s Gospel: “If you continue in my word, you are truly my disciples, and you will know the truth, and the truth will make you free”.  Hence, the call to remain in Jesus, the source of truth who makes us free.

Pope Francis further explained that Christian freedom is based on two fundamental pillars: first, freedom is the grace of Jesus; and second, it is Christ the Truth, who reveals Himself to us.

Freedom is a gift of love

According to Pope Francis, freedom is a gift from the Lord as it is the fruit of the death and resurrection of Jesus.  Liberated by Christ from the bonds of his past life, St. Paul concentrates his entire proclamation on Jesus.

“In fact,” the Pope said, “the truest freedom from the slavery of sin flows from the Cross of Christ,” the source of the liberation of the human person.

In fact, the truest freedom, the freedom from the slavery of sin, sprang from the Cross of Christ. Right there where Jesus allowed Himself to be nailed down, to become a slave, God has placed the source of man’s liberation. The fact that the cross, where we are stripped of every freedom in death, could become the source of freedom is a paradox that never ceases to amaze us.

It is the mystery of the love between Jesus and the Father, which leads Him to the Cross. Jesus achieves complete freedom by giving himself up to death, knowing that only in this way could He obtain life for everyone.

St. Paul had experienced this mystery of love first-hand.  By nailing “his flesh with its passions and desires” on the Cross he received the greatest gift of his life: freedom. This is the key to his intimacy with Jesus, which encourages us on the path of free life.  A Christian is free and not called not to return to be a slave to precepts and strange things.

Journey of truth and freedom

The second pillar of freedom, the Pope explains, is the truth of faith, which is not an abstract theory, but the reality of the living Christ, who touches the daily and overall meaning of personal life.

He points out that there are many who have not gone to school and cannot read and write, yet have understood well the message of Christ and have this wisdom that sets them free.  This is the wisdom of Christ that works through the Holy Spirit at baptism.  He says there are many who live the life of Christ more than the great theologians, for example, offering a great witness to the freedom of the Gospel.

Freedom makes one free by transforming a person’s life and directing it toward the good.  In order to be truly free, the Pope says, we need to know ourselves not only on the psychological level, but above all we need to open ourselves to the grace of Christ in the depths of our hearts.

Truth must make us restless. However, the Pope says, there are Christians who are never restless, who live the same way with no movement in their hearts.  This restlessness, he says, is the sign that the Holy Spirit working within us.  It is an active freedom, aroused by the grace of the Holy Spirit. This is why truth must constantly question and make us restless so that we may always go deeper into what we really are.

This journey of truth and freedom, the Pope says, is an arduous one that lasts a lifetime.  It is difficult but not impossible to remain free. He thus urges Christians to take up this path as it does us good.  It is a journey on which Love comes from the Cross guides and sustains us.  It is Love that reveals the truth and makes us free and happy.