Pope at Audience: Wrestling with God a metaphor for prayer

Pope at Audience: Wrestling with God a metaphor for prayer 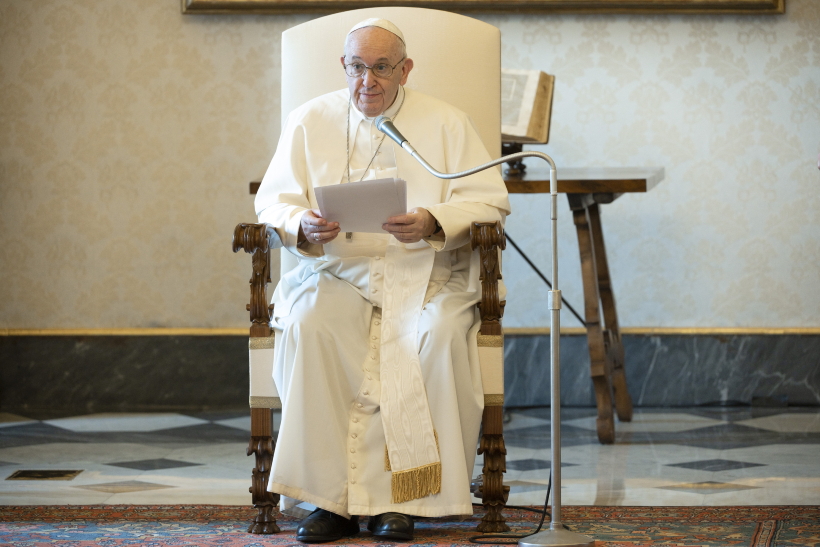 Pope Francis continues his cycle of catechesis on prayer at the Wednesday General Audience, focusing on the story of Jacob “wrestling with God” in the book of Genesis.

At the General Audience on Wednesday, Pope Francis reflected on the life of the patriarch Jacob, whose story is told in the book of Genesis.

Pope Francis introduced Jacob as “a man who shrewdly developed his best talent,” what we might call a “self-made” man, who obtains what he desires through his own ingenuity. “The biblical account tells us about the difficult relationship Jacob had with his brother Esau” from the very beginning, a rivalry that is never overcome.

But although he is the younger son, Jacob, through trickery, obtains “the blessing and birthright” of the first born from his father Isaac. “It is only the first in a long series of ploys of which this unscrupulous man is capable,” Pope Francis said.

Jacob manages, seemingly through his own devices, to succeed in life. Even when he is forced to flee from his brother, he is able to enrich himself and to enter a promising marriage. “But something is missing,” the Pope said. “And one day he hears the call of home” and sets out for his “ancient homeland” where his brother still lives.

When he reaches the final stage of his journey, Jacob pauses, wondering what awaits him upon his return. It is here, while he is reflecting on the reception he will receive, that “suddenly, a stranger grabs him and begins to wrestle with him.”

Pope Francis, quoting from the Catechism, explained that “the spiritual tradition of the Church has retained the symbol of prayer as a battle of faith and as the triumph of perseverance.”

After wrestling with the stranger throughout the night, Jacob is finally overcome when his opponent strikes his sciatic nerve. After asking Jacob his name, he tells him, “Your name shall no more be called Jacob, but Israel… for you have striven with God and with men, and have prevailed.” He refuses to tell Jacob his own name, but blesses him instead — and, the Pope said, “Jacob understands he has encountered God ‘face-to-face’.”

A metaphor for prayer

Pope Francis explained that “wrestling with God” is “a metaphor for prayer.”

Jacob, who had always succeeded in life by his own effort, is reminded that he is “a mortal man who trembles and fears. For once Jacob has only his frailty and powerlessness to present to God.” This, said Pope Francis, is when he is finally able to receive “God’s blessing, with which he limps into the promised land: vulnerable and wounded, but with a new heart.”

“But precisely in that moment, we need not fear,” Pope Francis said, “because God will give us a new name, which contains the meaning of our entire life; and He will offer us the blessing reserved to those who have allowed themselves to be changed by Him.”