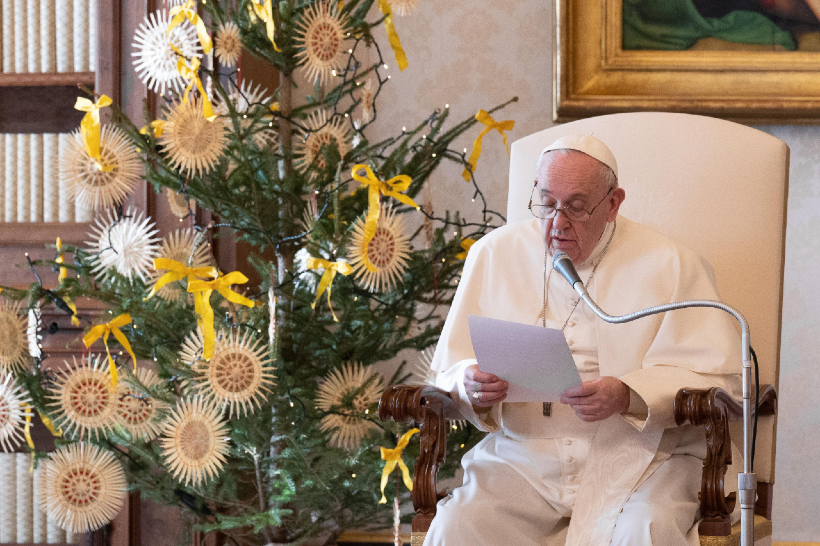 Pope Francis leads his weekly general audience from the library of the Apostolic Palace at the Vatican Dec. 30, 2020. In his main talk, the pope focused on the importance of thanking God and letting others see one’s gratitude. (CNS photo/Vatican Media)

During his general audience, Pope Francis reflected on the importance of gratitude in prayer. The healing of the ten lepers by Jesus is an example.

Continuing his series of catechesis on prayer, Pope Francis, during his general audience this week, dwelt upon the importance of gratitude in prayer, which he said makes the world better and brings hope.

As a case in point, he took the episode of the healing of the ten lepers in the Gospel of Luke.  The ten not only suffered physically but also from social and religious marginalization. “However, Jesus did not back off from meeting them. Sometimes, He surpassed the limitations imposed by the law and touched, embraced and healed the sick person. However, in this case, there was no contact”:

He heard their prayer, their cry for mercy, and sent them to the priests who were designated by law to certify their healing and re-admit them to normal life.  But on their way, when they found themselves healed, only one returned to thank Jesus and praise God before proceeding to the priests. That man was a Samaritan, a sort of “heretic” for the Jews of that time.  And Jesus comments: “Was no one found to return and give praise to God except this foreigner?” (17:18).

This episode, the Pope said, “divides the world in two: those who do not give thanks and those who do; those who take everything as if it is owed them, and those who welcome everything as a gift, as grace.”  The Catechism says, “Every event and need can become an offering of thanksgiving.”  Hence, the Pope said, the prayer of thanksgiving always begins with recognizing that “grace precedes us”.  “We were thought of before we learned how to think; we were loved before we learned how to love; we were desired before our hearts conceived a desire.”  “If we view life like this,” he pointed out, “then ‘thank you’ becomes the driving force of our day.”

Pope Francis then explained that the word “Eucharist,” the most essential Sacrament, is derived from the Greek word, which means thanksgiving. And Christians,  as all believers, bless God for the gift of life. “All of us are born because someone wanted us to have life. And this is only the first of a long series of debts that we incur by living. Debts of gratitude.”  After God, educators, catechists and others “gazed on us with pure eyes and carried out their roles above and beyond what was required of them.  They provoked us to be grateful. Even friendship is a gift for which we should always be grateful.”

Continuing his catechesis, the Pope said that this “gratitude” grows in meeting Jesus.  Jesus often provoked joy and praise to God in those whom He met. We too are called to participate in this immense jubilation as the episode of the ten lepers points out.  They were happy for recovering their health, which allowed them to “end that unending forced quarantine that excluded them from the community”.

The joy of encountering Jesus

However, only one among them experiences an “additional joy” in his healing.  “He rejoices at meeting Jesus. He now is certain of being loved.” And this is the crux of the matter.  It is the discovery of love as the force that governs the world, the Pope said, quoting the Italian poet Dante. For Christians, the Pope said, “this means we have a home, we dwell in Christ, and from that ‘dwelling’ we contemplate the rest of the world which appears infinitely more beautiful to us.

The Holy Father, thus, urged Christians to seek to remain always in the joy of encountering Jesus, never forgetting to give thanks. “If we are bearers of gratitude,” he said, “the world itself will become better, even if only a little bit, but that is enough to transmit a bit of hope.”  “Everything is united and connected, and everyone needs to do his or her part wherever we are.”