Pope at Mass: bishops and priests must be close to God’s people

Pope at Mass: bishops and priests must be close to God’s people 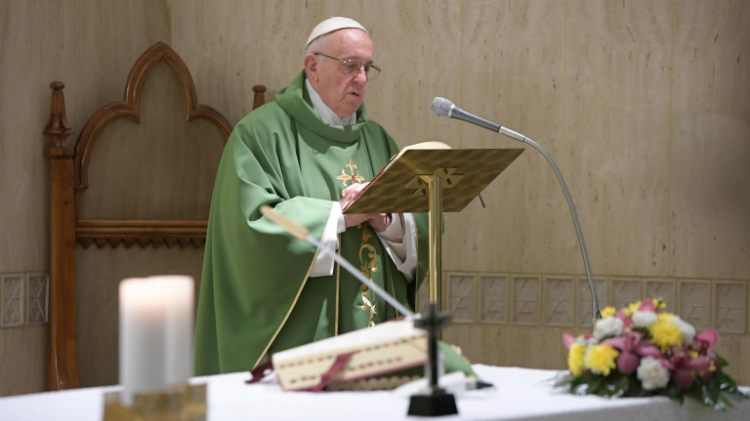 Pope at Mass: bishops and priests must be close to each other and to God’s people

Pope Francis asks for prayers for priests and bishops during Mass at the Casa Santa Marta, and urges all those who have received the gift of the priesthood to be close to each other and to the people of God.

Pope Francis on Friday focused on the ministry of bishops and asked the faithful to pray for them so they may never neglect the gift of their ministry.

He recalled Thursday’s Liturgical reading in which the Apostle Paul gives his advice to the young bishop Timothy, and said more advice to bishops is to be found in today’s reading.

Yesterday, he said, at the heart of the message was the call to never neglect the gift of ordained ministry.

Today, he continued, the reflection focusses on things that weaken the life of the ordained minister like money, gossip and silly arguments.

Continuing to give advice to bishops, but also to priests and deacons, Pope Francis then focused on the need for “closeness”.

He pinpointed four different ways that ordained ministers must be “close”.

First of all, a bishop “is a man who is close to God,” he said, recalling the fact that the apostles “invented” deacons in order to better serve widows and orphans,

Peter, he explained, tells us that our duty – that is the duty of the apostles – is “to pray and proclaim the Word”.

Thus, the Pope continued, “the bishop’s first task” is to pray: it gives us strength and awakens within us the awareness of this gift of the ordained ministry that must never be neglected.

Then he called on bishops to be close to their priests, to their deacons and to their collaborators: the ones who are closest to them.

“It is sad when a bishop forgets about his priests,” Pope Francis noted, it is sad to hear a priest complain he is unable to get in touch with his bishop or make an appointment to see him in a brief space of time.

“A priest has the right to know that he has a father,” he said.

The Pope then went on to speak of the need for closeness between priests.

Divisions within the presbytery, he warned, are the work of the devil. And when that happens, he continued, it leads to small groups who are divided by ideologies or by sympathies.

So, the third “closeness” of which I am speaking, Pope Francis said, is the need for closeness among priests themselves.

Closeness to the people of God

Finally, he continued, the fourth is that of bishops and priests with the people of God.

In the second Letter, he explained, Paul tells Timothy not to forget his mother and his grandmother, meaning that he must not forget his roots.

When a bishop breaks away from the people of God, the Pope explained, he ends up following ideologies that have nothing to do with the ministry: “he is not a minister, he is not a servant. He has forgotten the free gift that he received.”

The Pope concluded urging all ordained ministers not to forget the four ways in which they must nurture “closeness”: closeness to God, prayer, closeness of the bishop to his priests; closeness of priests to each other; closeness to the people of God.

And he asked those present to pray for their priests and bishops”, he said, “So we may safeguard the gift that has been given to us – with this closeness”.