Pope at Mass: ‘he who says he loves God but does not love his brother is a liar’

Pope at Mass: ‘he who says he loves God but does not love his brother is a liar’ 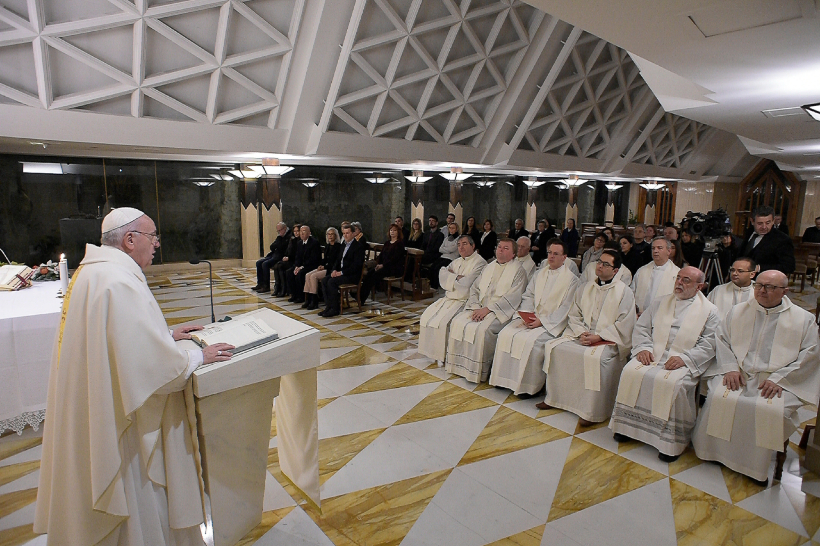 Pope Francis celebrates Mass at the Casa Santa Marta and reflects on how love is expressed through concrete actions.

Pope Francis reflected on the liturgical reading of the day, taken from the First Letter of St. John the Apostle, which focusses on the topic of love.

The apostle, the Pope said, understood what love is, experienced it, and as he entered into the heart of Jesus, he understood how it manifested itself. In his Letter, he continued, he tells us how we love and how we have been loved.

First of all, the Pope explained, is the fact that “We love God because He loved us first.”

Love, he continued, stems from Him: “I begin to love, or I can begin to love because I know that He loved me first”. And, he added, “If He had not loved us we certainly could not love.”

“If a newborn child could speak, he would certainly express the fact that he feels loved by his parents.  Parents love their child just as God loves us…He loved us first. And this gives birth to and increases our capacity to love,” he said.

About loving and lying

The second thing the apostle says, the Pope continued, is that “If one says, ‘I love God’ but hates his brother, he is a liar.” John, he pointed out, does not describe such a person as ‘rude’ or someone ‘who is wrong’, he calls him a ‘liar’.

And  he went on to analyse the word ‘liar’ which, he said, is clearly defined in the Bible as “the devil’s way of being, ‘the Great Liar’, as the New Testament tells us, ‘the father of lies’.

So, the Pope said, “if you say you love God but hate your brother, you are on the other side: you are a liar. There are no concessions to this.”

Many, Pope Francis continued, find justifications for not loving: “Some say ‘I don’t hate, Father, but there are many people who hurt me, or people I can’t accept because they are rude or crude.”

He underscored the concrete nature of love indicated by John when he writes “whoever does not love a brother whom he has seen cannot love God whom he has not seen.”

“If you are not capable of loving people, from the closest to the furthest away, you cannot tell us that you love God: you are a liar,” he said.

Pope Francis then reflected on another aspect that can stop people from loving: their wish not “to meddle” in the lives of others. This too, he said is not good, because love “expresses itself by doing good.”

True love, he explained, is expressed in everyday live, with its problems, its feelings of affection and dislike.

Remember, the Pope said quoting from Saint Albert Hurtado, ‘It is good not to do evil, but it is bad not to do good’, true love, he said “must lead you to do good (…), to dirty your hands in works of love.”

Through faith we can conquer the world

It is not easy, Pope Francis admitted concluding his homily, but through faith there is the possibility of prevailing over a mentality “that prevents us from loving”.

The path of faith he said is a path that is not undertaken by those who are indifferent, who wash their hands of problems, who do not want to meddle in order to help, who say they love God but do not love their neighbor.

“May the Lord teach us these truths: the knowledge of having been loved first and the courage to love our brothers.”