Pope at Mass in Bari: “Today let us choose love”

Pope at Mass in Bari: “Today let us choose love” 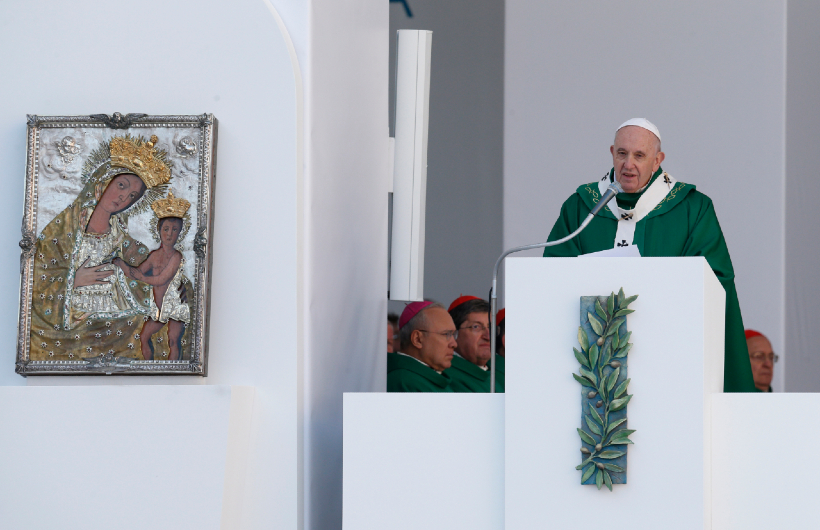 Pope Francis celebrates Mass in Bari, reflecting on the Gospel for the Seventh Sunday in Ordinary Time in his homily, encouraging that we pray for the grace to love.

Pope Francis celebrated Mass after meeting with the Bishops of the Mediterranean region gathered in Bari, Italy. During his homily, the Pope reflected on the Gospel of Matthew 5:38-48.

Pope Francis began his homily explaining that Jesus went beyond the “ancient law: ‘An eye for an eye and a tooth for a tooth’ ” which itself was “a sign of progress since it prevented excessive retaliation”. By asking us to say no to violence, Pope Francis said that Jesus went “far beyond this”.

The Father loves everyone

Jesus’ words do not mean that if we practice non-violence that “the wicked will desist”, Pope Francis said. Rather, the reason why Jesus went beyond the ancient law was because “the Father, our Father, continues to love everyone, even when his love is not reciprocated”. Jesus practiced what He preached, the Pope continued. “He did not point a finger at those who wrongfully condemned him and put him to a cruel death, but opened his arms to them on the cross”.

Jesus’ words are direct and clear and are the “only way” for those who call themselves Christian, the Pope continued. “ ‘But I say to you: love your enemies’.  His words are deliberate and precise”. Jesus’ love has no boundaries, barriers, or measure, the Pope said. Yet, “How many times have we neglected that demand, behaving like everyone else!” The only extremism that Christians are allowed is the “extremism of charity” which Jesus Himself asks of us.

Pray to learn how to love

Pope Francis admitted that it is hard to love as Jesus asks us. Yet, if it were impossible, Jesus would not have given us such a commend. “By our own effort, it is difficult to achieve; it is a grace and it needs to be implored”. In addition to asking for God’s help in other things, or for favors, the Pope suggested that we “pray to learn how to love!  We need to pray more frequently for the grace to live the essence of the Gospel, to be truly Christian.  For ‘in the evening of life, we will be judged on love’ (Saint John of the Cross, Sayings of Light and Love, 57).

In concluding his homily, Pope Francis himself used direct and precise language: “Today let us choose love”, he said. “Let us accept the challenge of Jesus, the challenge of charity.  Then we will be true Christians and our world will be more human”.