Pope at Mass: Jesus passes by, let’s not miss Him

Pope at Mass: Jesus passes by, let’s not miss Him 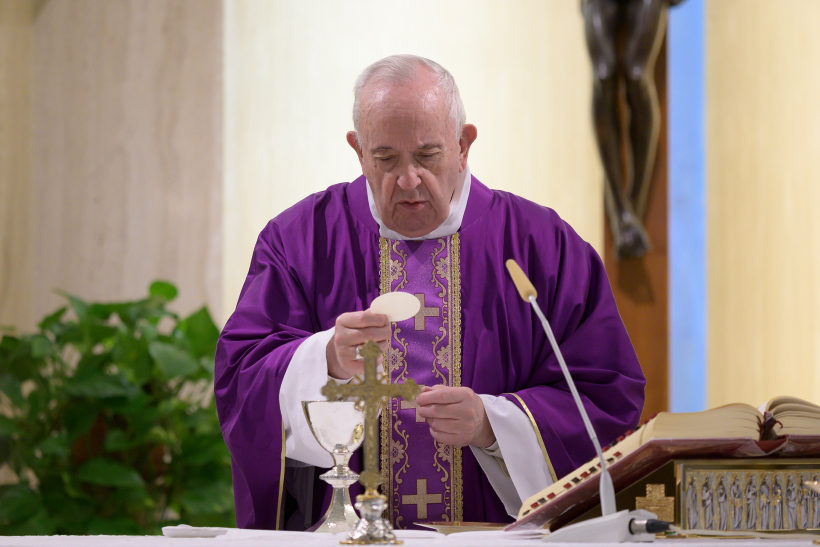 Pope Francis reflects on the healing of the blind man at the Casa Santa Marta during the Mass he celebrated on Sunday morning for those who are dying alone. (Playback of the liturgy included)

“In these days we’re hearing the news of so many people who are dying…dying alone, without being able to say goodbye to their loved ones”. These were the words with which Pope Francis began his Mass on Sunday morning at the Casa Santa Marta.

“Let’s think about them and pray for them. For families as well, who cannot accompany their loved ones on that journey. We pray in a special way for the dying and for their families.”

Pope Francis began his homily saying the 9th Chapter of John “speaks for itself”. It’s a “proclamation of Jesus Christ”, and a “catechesis”, he said. The rest of his homily was a reflection on the words of St Augustine which the Pope said “always touch” him: “I am afraid when the Lord passes by because I am afraid that He will pass and I might not notice Him”.

“One thing is true. In Jesus’ presence, the true sentiments of the heart come forth. Our true attitudes come out. This is a grace. Because of this St Augustine was afraid to let Him pass by without realizing it.”’

Jesus brings out the best

When Jesus passes by, He heals the blind man and creates a “scandal”. “It brings out both the best and the worst in people”, the Pope continued. This brought out the best in the blind man.

“The blind man’s wisdom in how he responds is astonishing. He was used to moving around with his hands. He could sniff danger. He sensed anything that was dangerous and might make him slip. He moved around like a blind person. His arguments are clear and precise. He even uses irony.”

Jesus brings out the worst

This scandal, instead, brought out the worst in the doctors of the law.

“They knew all of the laws, every single one of them. But they were fixated there. They didn’t understand when God was passing by. They were rigid, attached to their customs. Jesus Himself says so in the Gospel…. And so, in order to preserve these customs, committing an injustice wasn’t a problem because their customs said that [what Jesus had done] was not just. That rigidity led them to commit an injustice. Jesus’ presence evoked the sentiment of closure”.

Pick up the 9th chapter of John

Pope Francis concluded his homily with the invitation to “pick up the Gospel today…and read it calmly at home, one or two times, in order to really understand what happens when Jesus passes by.”

“May it provoke our sentiments to come out so we might understand well what Saint Augustine tells us, ‘I’m afraid when the Lord passes because He might pass by and I may not recognize it and convert myself.’ ”