Pope at Mass: many fires of war today – true peace is sown in the heart

Pope at Mass: many fires of war today – true peace is sown in the heart 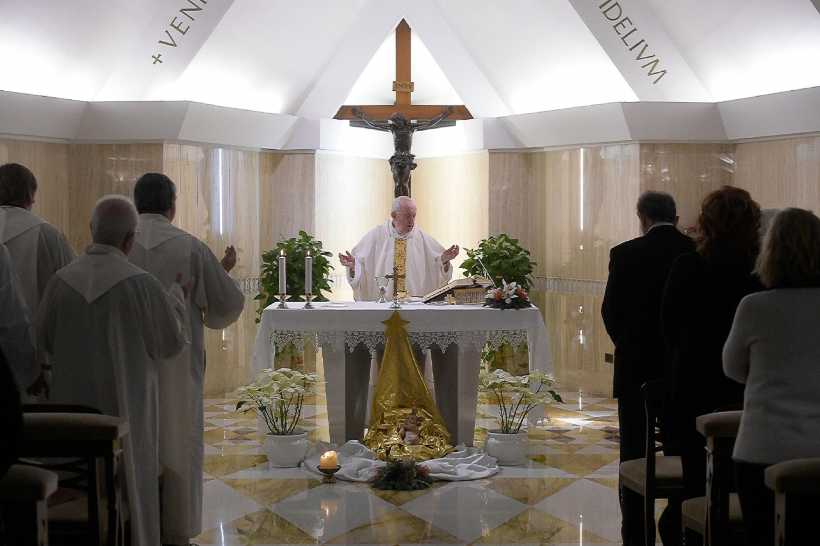 Celebrating Mass on Thursday, Pope Francis points the way to peace saying, one must “remain in the Lord” by loving in “little things”. Peace in the world, he says, begins with peace in the heart.

According to Pope Francis, we cannot “be Christians” if we are “sowers of war” in our family, in the neighbourhood and the workplace. “May the Lord give us the Holy Spirit to remain in Him and teach us to love, simply, without making war on others,” the Pope urged in his homily at Mass, Thursday morning, in the chapel of Casa Santa Marta.

He was reflecting on the Second Letter of St. John, who urges Christians on the path to peace by remaining in the Lord with the love that is seen in little things.

Speaking about peace, the Pope said that we immediately think of wars and that there be secure peace in the world, in another country or another situation. He noted that even today, with many fires of war lit, our minds immediately evoke peace, imploring it from the Lord for the world and for everyone.

Remain in the Lord

Pope Francis urged all to ask themselves about peace at home, whether our hearts are at peace or are anxious for war, to gain something more and make ourselves heard. According to him, the “peace of the people” or a country “is sown in the heart”. He reminded Christians that unless we have peace in our hearts, we cannot think of peace in the world. And the path to peace within, St. John points out in the day’s first reading, is to remain in the Lord.

According to Pope Francis, the way to remain in the Lord, as St. John says, is by loving one another, This is the secret to peace.

True love, according to Pope Francis, is not that of soap operas and television shows but is something that urges us to speak “well” of others. If one cannot speak well of others, it is better to shut one’s mouth, because speaking ill of others and “skinning” them is war.

Love, the Pope emphasized, is revealed in “little things”. “If there is war in my heart”, he argues, “there will be war in my family, in my neighbourhood and my workplace”. Jealousy, envy, slander, lead us to war with one another. They “destroy”, they are like “filth”.

Pope Francis noted that usually the way we act in the family, in the neighbourhood and the workplace is an attitude of war. It destroys and dirties the other, which, he said, is not the love and the secure peace we asked for. In this, there is no Holy Spirit. Whether a layperson, a priest, a religious, a bishop, a Pope or anyone, the Holy Father said, it happens to each one of us – our immediate reaction is to condemn the other person. “To make war,” he said, “is the temptation of the devil.”

Peace – a gift of the Holy Spirit

When the devil manages to make us go to war and light the fire of war, the Pope continued, he is happy he does not have to work anymore. “We are the ones who work to destroy each other”, “we are the ones who carry on the war, the destruction”, destroying “first” ourselves, “because we throw love out” and then the others. The Pope noted how much we are addicted to this habit of dirtying others. It is a seed that the devil sows inside us. In conclusion, the Pope prayed for a secure peace, which is “the gift of the Holy Spirit”, by trying to remain in the Lord.