Pope at Mass: Pray for detainees in overcrowded prisons

Pope at Mass: Pray for detainees in overcrowded prisons 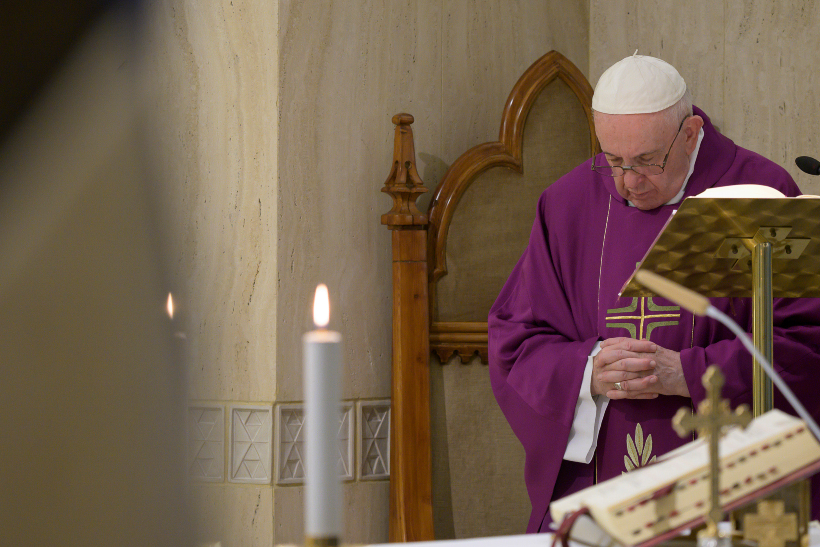 Pope Francis offers his Mass on Monday morning in the Casa Santa Marta for detainees in overcrowded prisons and reminds us in his homily that we will be judged for our attitude toward the poor. (playback included)

Dedicating his daily Mass to prisoners, Pope Francis asked everyone to pray for the serious problem of overcrowded prisons in many parts of the world.

‘Where there is overcrowding, there is the danger in this pandemic that it winds up being a grave tragedy. Let us pray for those responsible, and for those who need to make decisions in this area, that they might find a correct and creative way to resolve the problem.”

The poor always with you

In his homily, the Pope reflected on the day’s Gospel reading (Jn 12:1-11) in which Mary – the sister of Lazarus and Martha – anoints Jesus’ feet with costly perfumed oil.

The event provokes an indignant response from Judas to which Jesus replies with an enigmatic statement.

Pope Francis focused his homily on Jesus’ words: “You always have the poor with you.”

He said Judas appears to think of the poor, but not because they really mattered to him. What he cared about was money. He held the common purse and was a thief.

The Pope said there is always someone with these characteristics.

“This story of the unfaithful administrator is always current: they are always around, even at a high level. We think of some charitable or humanitarian organizations that have many, many employees, with a structure full of people and only about 40% of donations make it to the poor because 60% goes to pay many salaries. This is a way of taking money from the poor.”

Pope Francis said Jesus’ words about having the poor always with us are true. But, he said, the ones we see on the street are only the tip of the iceberg.

“The great majority of the poor are those whom we do not see: the hidden poor. And we don’t see them because we enter into this culture of indifference which denies their existence. So we say, ‘No, there aren’t that many. You don’t see many.’ And we minimize the reality of the poor. But there are so very many.”

Even those who are not indifferent to the presence of the poor can come to see them as “ornaments in a city, like statues,” said the Pope, “as if it were normal.”

Pope Francis said many poor people are victims of economic and financial systems but are too embarrassed to ask for help. They struggle to make it to the end of the month, even if they have a job.

The Pope then told a story from his time as the Archbishop of Buenos Aires in Argentina.

“Once, someone told me about an abandoned factory in which around 15 families had lived for the previous few months. I went there. There were families with children, and each had claimed a part of the factory to live in. Looking closer, I saw that every family had good furniture, indicative of the middle class, with a television set. But they wound up there because they couldn’t pay their rent. These are the new poor who are forced to leave their homes because they can’t afford them. This is the injustice of the economic or financial system that has left them like that.”

Jesus always present in the poor

In conclusion, Pope Francis recalled that Jesus’ first question on the Day of Judgment will be: “How did you treat the poor? Did you feed them? Did you visit those in prison, in hospital? Did you help the widow and the orphan? Because I was there.”

The Pope said we will be judged “according to our relationship with the poor.”

“If I ignore the poor today, leaving them aside and acting as if they didn’t exist, the Lord will ignore me on the Day of Judgment. When Jesus says, ‘You always have the poor with you,’ He is saying, ‘I will always be with you in the poor. I will be present there.’ And this is not acting like a communist. This is at the center of the Gospel: we will be judged on this.”