Pope at Mass: Pray for persons suffering from unjust sentences

Pope at Mass: Pray for persons suffering from unjust sentences 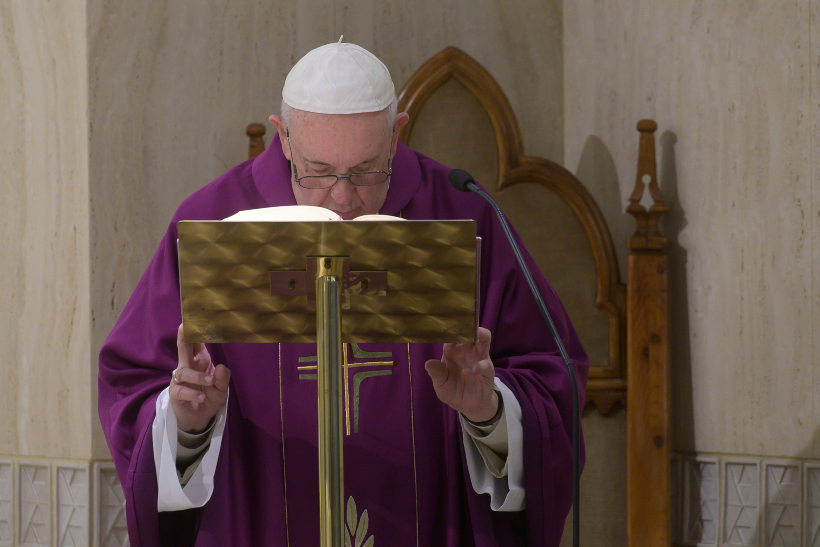 Pope Francis offers his Mass on Tuesday morning in the Casa Santa Marta for people who suffer unjust sentences because of persecution. He also reminds us that we are chosen to serve.

Introducing Tuesday morning’s liturgy, Pope Francis said: “I would like to pray today for all those persons who suffer an unjust sentence because someone had it in for them.”

Pope Francis explained that Jesus was hounded by the doctors of the law even though He was innocent.

In his homily, Pope Francis focused on the vocation of servant presented in the First Reading.

We are all chosen

Isaiah’s prophecy (Is 49: 1-6) relates to the Messiah and the People of God. God chose the prophet before he was born, explained Pope Francis. In the same way, each one of us is chosen from our mother’s womb with the vocation of serving. None of us “fell into this world by chance”, he said.

“Each one of us has a destiny, a free destiny, the destiny of being chosen by God. I am born with the destiny…chosen to be a child of God, to be a servant of God with the task of serving.”

The vocation of service

“To serve is not demanding some benefit for ourselves other than serving,” said Pope Francis. Jesus, the Servant of God gives us an example of service. The glory of Jesus was serving until death. “It seemed a defeat but it was a way of serving”, he said.

When the People of God distance themselves from the attitude of serving, they are a “People that have apostatized”, explains the Pope. This leads them to construct their lives on other loves that are often idolatrous and they lose their vocation.

The attitude of repentance

Pope Francis explained that the important thing is our attitude before God who chose us and anointed us as His servant. Except for Our Lady and Jesus, we have all fallen. The example of Peter is a source of inspiration. When Peter denied Jesus and the cock crowed, he cried and repented (Mt 26:75). This is the path of a servant who asks for forgiveness when he or she slips and falls.

The other path is that of the servant who is incapable of understanding that he or she has fallen. This path leaves the heart open to the passions that lead to idolatry. Like Judas, the heart becomes open to Satan.

Concluding his homily, the Pope invited us to think of Jesus who was “faithful in service”. We are by vocation meant to serve and not to make a profit from our position in the Church. Pope Francis prayed that like Peter, we may be able to weep when we slip and fall.