Pope at Mass: Seek God’s face in the poor, sick, abandoned and foreigners

Pope at Mass: Seek God’s face in the poor, sick, abandoned and foreigners 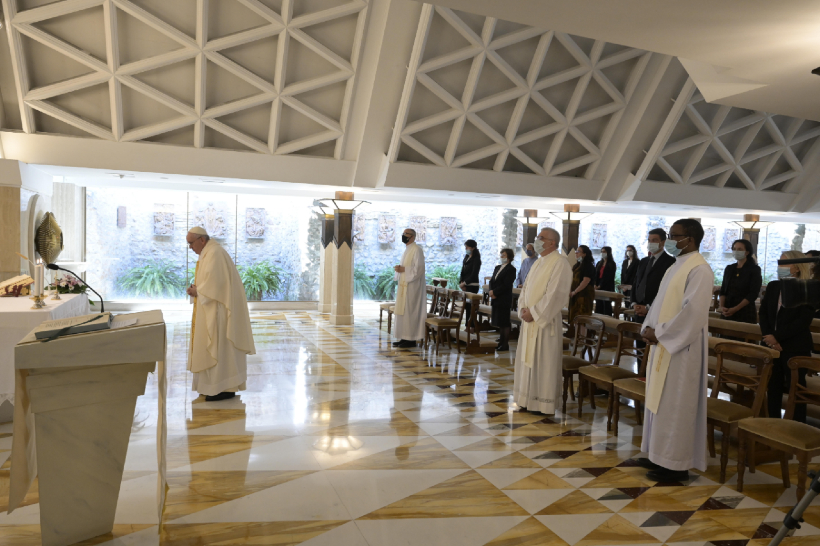 Pope Francis celebrates the 7th anniversary of his visit to the migrants in the Italian island of Lampedusa with a Mass in the Casa Santa Marta chapel.

Pope Francis on Wednesday urged Christians to discover the face of Jesus in the migrants, refugees and the displaced who are forced to flee because of the many injustices that still afflict our world today.

Celebrating a Mass in the Vatican’s Casa Santa Marta chapel, to commemorate the 7th anniversary of his visit to the migrants in the Italian island of Lampedusa, the Pope recalled the words of Jesus – “Whatever you did for one of these least brothers of mine, you did for me”.  He said this warning, for better or for worse, is a burning issue today.

The July 8, 2013 visit of the Pope to the Mediterranean island was the first of his pontificate after his election on 13 March of the same year.  During the visit, he threw a floral wreath in the sea in memory of some 20,000 migrants who died while trying to cross the Mediterranean.  He briefly met and spoke to some young African migrants before celebrating an open-air Mass.

The visit is highly symbolic of the pontificate of the Argentine Pope, who wants the Church to be an inclusive one that goes forth to the peripheries, to include all, leaving no one out.

Seeking God’s face in others

Noting that the day’s psalm speaks about seeking the face of God, the Pope said that this fundamental attitude is the ultimate goal of all the faithful.

In this regard, the Prophet Hosea in the first reading, speaks about how the people of Israel had drifted away from the Lord because of abundance, prosperity and riches which filled their heart with falsehood and injustice, “a sin, from which even we, modern Christians, are not immune.”

Recalling his homily of 7 years ago in Lampedusa, the Pope said that the “culture of comfort, makes us think only of ourselves, makes us insensitive to the cries of other people.”  It creates a fleeting and empty illusion, leading to indifference to others, even to the globalization of indifference.  “We have become used to the suffering of others: it doesn’t affect me; it doesn’t concern me; it’s none of my business!” the Pope said.  “Sow for yourselves justice, reap the fruit of piety,” the Pope said echoing the call of Hosea to conversion.

Seeking the face of the Lord, the Holy Father said, entails the desire for a personal encounter with the Lord, just as it happened with the twelve apostles, as narrated in the day’s Gospel.  This personal encounter with the Lord, which is a time of grace and salvation, he explained,  “immediately entails a mission” – to proclaim that “the kingdom of heaven is at hand.”  “Encounter and mission,” he stressed, “cannot be separated.”

“Whatever you did… you did for me”

This mission, the Pope said, is also for the disciples of the third millennium.  “As we undertake to seek the face of the Lord, we may recognize Him in the face of the poor, the sick, the abandoned, and the foreigners whom God places on our way.”

“It is He who knocks on our door, hungry, thirsty, naked, sick, imprisoned, seeking an encounter with us and requesting our assistance.”

Pope Francis urged Christians to use the words of Jesus as a fundamental element to examine our conscience on a daily basis.  In this regard, he thought of the detention camps in Libya, “the abuses and violence that migrants are victims of, journeys of hope, rescue operations, and push-backs.”

The Holy Father remembered meeting a migrant during his visit to Lampedusa, who narrated at length the “terrible things” they suffered to get there, but the interpreter was very brief.  When the Pope got back home that afternoon, the lady receptionist, a daughter of Ethiopian parents who followed the conversation on television, said the Ethiopian interpreter didn’t even convey a fourth of the torture and suffering the migrants went through.  What was interpreted, the Pope remarked, was a “distilled” version of the real story.

This is what is happening with Libya today, the Holy Father said.  “They give us a ‘distilled’ version. “We know the war is bad but you can’t imagine the hell that one goes through there, in those detention camps.” The Pope said, “these people were only coming with the hope and crossing the sea.”

The Pope concluded, urging the Virgin Mary, under the title, “Solace or Comfort of Migrants”, to help Christians to “ discover the face of Her Son in all our brothers and sisters who are forced to flee from their homeland because of the many injustices that still afflict our world today”.