Pope at Mass: Service, not titles, is the measure of greatness in the Church

Pope at Mass: Service, not titles, is the measure of greatness in the Church 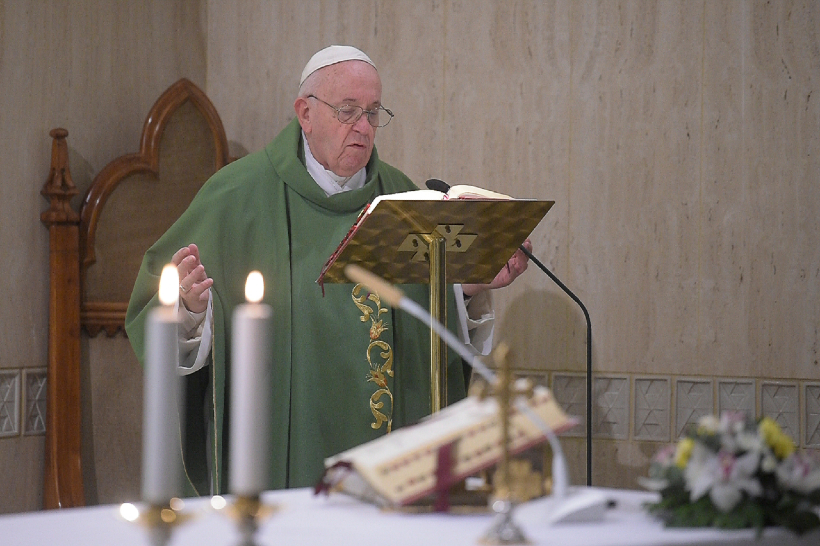 Pope Francis warns against passions and against envy and gossip, in his homily at the daily Mass at Casa Santa Marta. Worldliness, he says, is the enemy of God, because the Lord calls us to humility.

In his homily at the daily Mass at Casa Santa Marta, Pope Francis reflected on the day’s Gospel, in which Jesus tells the disciples, “If anyone wishes to be first, he shall be the last of all and the servant of all”. If we make compromises while trying to live out the Gospel, he said, we will end up imbibing the spirit of the world, which leads to dominating others and is the “enemy of God”. On the contrary, Jesus calls us to the path of service.

Jesus knew that the disciples, because of ambition, had been arguing about which one of them was the greatest. Pope Francis explained that this attitude of wanting to advance, of wanting to be raised up is “the spirit of the world”. Going back to the first reading, he noted that St James says that “to be a lover of the world means enmity with God”. The Pope continued:

This anxiety of worldliness, this concern to be more important than others, saying, “No! I deserve this, that person doesn’t deserve it”: this is worldliness, this is the spirit of the world, and those who breathe in this spirit, breathe in the enmity of God. Jesus, in another passage, says to the disciples, “Either you are with me or you are against me”. There are no compromises in the Gospel. And when someone wants to live the Gospel while making compromises, they ultimately find themselves with the worldly spirit, which always seeks to make compromises in order to climb higher, to dominate, to be greater.

Envy: a worm that leads you to destroy others

So many wars and so many quarrels come precisely from worldly desires, from the passions, the Pope emphasized, referring again to the words of St James.

It’s true that there are many actual wars in the world today, Pope Francis said. But he asked, “What about the wars among ourselves, like the one among the Apostles about who is the most important?” He described those who are infected with worldliness, like careerists who are always striving for a higher place, for greater recognition:

This is the spirit of the world, and this is not Christian. [They say] “No! It’s my turn! I have to earn more to get more money and more power”. This is the spirit of the world. And then, [there’s] the wickedness of chatter: gossip. Where does it come from? From envy. The great envious one is the devil, we know that it says so in the Bible. [It comes] from envy. Through the devil’s envy evil enters into the world. Envy is a worm that pushes you to destroy, to bad-mouth others, to annihilate others.

Greatness in the Church comes from service

In the discussion among the disciples, all these passions were present, Pope Francis said; and so Jesus rebuked the disciples, and called them to become servants to all, and to take the last place:

Who is the most important in the Church? The Pope, the bishops, the monsignors, the cardinals, the pastors of the most beautiful parishes, the presidents of lay associations? No! The greatest in the Church are those who make themselves servants of all, those who serve everyone, not those who have titles. And to help us understand this, He took a child and placed him in their midst; and embracing him with tenderness – because Jesus spoke with tenderness, He had so much of it – He said to them: “Whoever receives a child, receives Me”. That is, whoever welcomes the most humble, the one who serves the most. This is the path. There is only one path against the spirit of the world: humility. Serving others, choosing the last place, not climbing the ladder.

He continued, saying there is no need to make compromises, to “bargain with the spirit of the world”, because worldliness “is the enemy of God”.

On the contrary, Pope Francis said, we need to listen to these “very wise” words of encouragement that Jesus speaks in the Gospel: “If anyone wishes to be first, he shall be the last of all and the servant of all”.