Pope at Mass: Thank you to those who pray for people in difficulty

Pope at Mass: Thank you to those who pray for people in difficulty 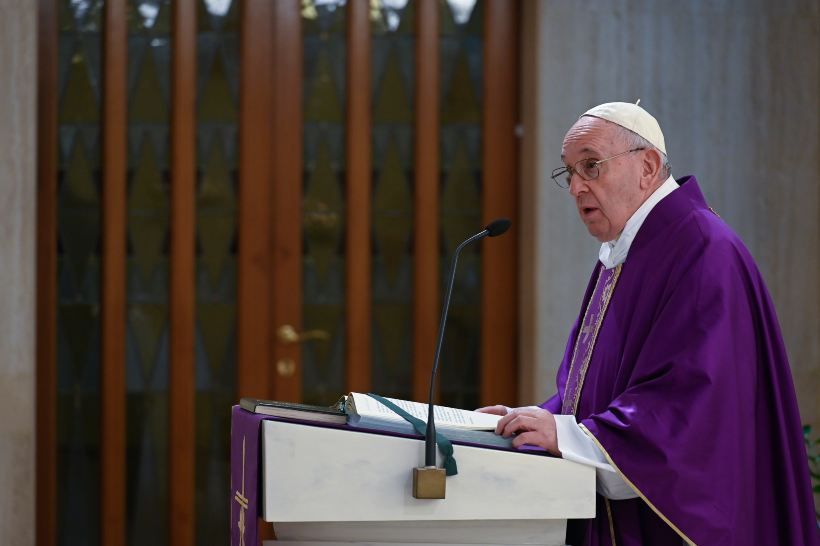 In his Mass at Casa Santa Marta on Friday, Pope Francis expresses his gratitude for those who are concerned for the sick, the elderly, and families that don’t have the means to get by.

Pope Francis began his homily on Friday morning by noting that the difficult times we are facing have inspired in many people a more general concern for others: for families that don’t have enough to get by, for the elderly who are alone, for the sick in hospitals. They are praying for others, “that help might somehow arrive”.

“This is a good sign”, the Pope said, “and we thank the Lord, who is arousing these sentiments in the hearts of the faithful”.

The fury of the wicked against Jesus

In his reflections on the day’s readings, Pope Francis said that the first reading, from the book of Wisdom, reads almost like a news report about what will happen to Jesus. “It’s almost a historical account of what will happen later”, he said. It tells how “the wicked” are obsessed with Jesus because He reproves them for their evil way of life, and so they plan to test Him “with revilement and torture”, and ultimately “condemn Him to a shameful death”.

“This is not simple hatred”, the Pope said, but a kind of “relentless fury” that is inspired by the devil. As he did with Job, the devil tries to separate people from God, “to destroy the work of God”. This type of fierce determination to destroy others comes “from the devil”. It can be seen not only in how the devil attacked Jesus, but also in the persecution of Christians. The devil, said Pope Francis, uses “the most sophisticated means to lead [Christians] to apostasy, to lead them away from God” – and this is literally “diabolic”.

Silence in the face of “the spirit of fury”

How should we respond to such ferocious determination, the Pope asked? He said there are only two appropriate ways to react: to dialogue or to remain silent. We should do what Jesus did: In the Gospels, we see that Jesus spoke out, but when He knew that words would do not any good, He was silent. In the face of “the spirit of fury”, Jesus remained silent, the Pope emphasized, and in silence, He underwent His Passion.

The courage to remain silent

Silence, said Pope Francis, is also the appropriate response to the “little acts of fury” that we face each day, such as gossip. Chattering about people behind their backs, gossiping about them, is a kind of “social harassment”, not as strong as persecution, perhaps, but nonetheless a kind of fury, because it destroys others.

“Let us ask the Lord for the grace to fight against the evil spirit”, the Pope said in conclusion, “to dialogue when we need to dialogue, but, in the face of the spirit of fury, to have the courage to remain silent, and allow others to speak”.