Pope at Mass: that governments, scientists, politicians may find just solutions to Covid-19

Pope at Mass: that governments, scientists, politicians may find just solutions to Covid-19 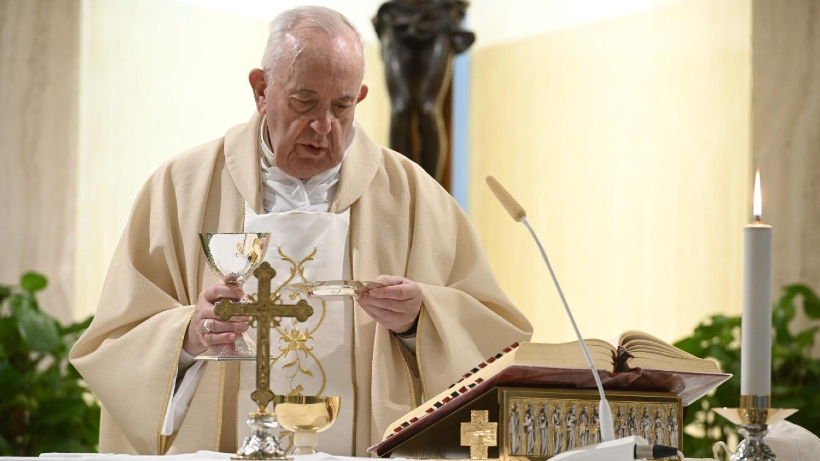 Pope Francis, at Mass on Easter Monday at Casa Santa Marta, urges prayers that governments, scientists and politicians may find just solutions to the Covid-19 crisis, in favor of the people. This task, he said in his homily, will depend on their choice between the life of the people and the god money.

At the start of the Mass, Pope Francis announced the day’s Mass intention.

“Today, let us pray for government leaders, scientists, and politicians who are beginning to study a way out of the pandemic, though its “aftermath” has already begun. May they find the right way, always for the good of their people.”

Later in his homily, the Pope reflected on  Easter Monday’s Gospel from Matthew where the Risen Lord exhorts some women to ask his disciples to go to Galilee where He will meet them.

Meanwhile, the priests, aware that the body of Jesus is missing, decide to bribe the soldiers into saying that the disciples of Jesus stole His body at night while the guards slept.

Choice between God and money

The women in today’s Gospel, the Pope pointed out, present us with a human choice that applies even to our times, namely the choice between the joy and hope of the resurrection of Jesus, and nostalgia for the tomb.  It is better not to live with the empty tomb of life’s many problems, the Pope said.

There is also another choice, the Pope said, recalling Christ’s warning that one cannot serve both the Lord God and the lord of money.

When we decide to hide facts, we serve the god of money, which is what the priests and the doctors of the law chose when they decided to hide the evidence and the truth of the resurrection by buying the silence of the witnesses.

In fact, the Holy Father pointed out, when Jesus died, one of the guards confessed: “Truly, this man was the Son of God!”

The Pope described this hiding of truth as “pure corruption”.  If you do not confess Jesus Christ the Lord, it is because of corruption.  Many people, he said, don’t confess Jesus because they don’t know Him, which is our fault because we have not announced Him consistently.

Where there is clear evidence, the Pope said, we take the road of the devil and of corruption and pay to keep the mouth shut.

Tomb of the god of money

The Holy Father said that in the post-coronavirus pandemic, which he hopes will come soon, we have the same choice before us.  “We will either bet on life, in favor of the resurrection of our people, or we will bet on the god of money, turning back to the tomb of hunger, slavery, war, the making of weapons, of children without an education. he said.

The Holy Father concluded praying that the Lord help us in our personal life and social life, to always choose the good of the people, without ever falling into the tomb of the god of money.