Pope at Mass: ‘We pray for those who remain in fear’

Pope at Mass: ‘We pray for those who remain in fear’ 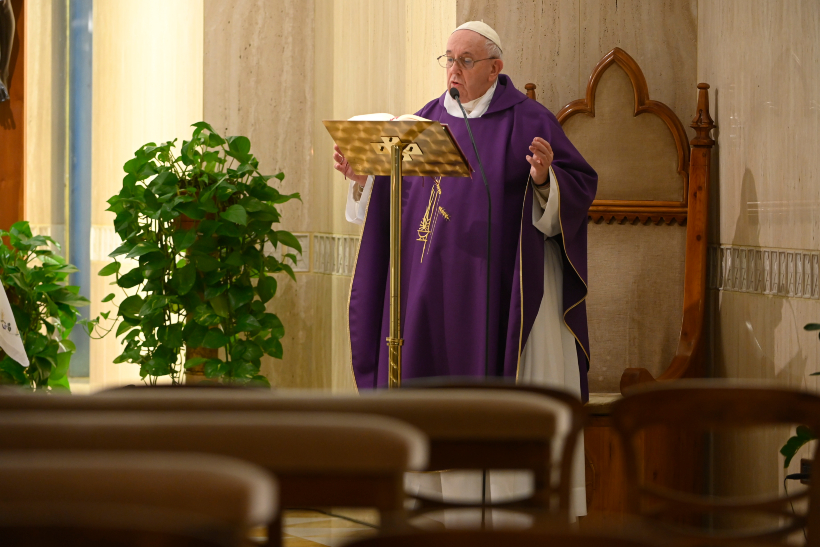 Pope Francis prayed for those overcome by “fear because of the pandemic”, and reflected on the two women from Monday’s readings during Mass at the Casa Santa Marta. (playback included)

The Pope’s intention for Mass on Monday morning at the Casa Santa Marta was “for the many people who are not succeeding in coping and remain in fear because of the pandemic. May the Lord help them”, he continued, “to have the strength to cope for the good of society and the entire community.”

The Pope’s homily was a reflection on Psalm 23. He applied it to the two women presented in the readings for the Fifth Monday of Lent: Susanna and the woman caught in adultery (Daniel 13; John 8:1-11).

Pope Francis began his homily reciting the first half of Psalm 23, the Responsorial Psalm for the day. Both Susanna and the woman caught in adultery experienced the Lord’s presence in the dark valley, he said. Innocent Susanna had been falsely accused, the other had committed sin. Both had a death sentence hanging over their heads.

“The Fathers of the Church saw a figure of the Church in these women: holy but with sinful children. … Both women were desperate…. Susanna trusts in the Lord.

The Pope went on to comment on the two groups of men present. Both groups “had positions in the church”. The group of judges, and the doctors of the law. Those who condemned Susanna were corrupt; those who condemned the woman caught in adultery were hypocrites.

“One woman fell into the hands of hypocrites, the other into the hands of the corrupt. There was no way out….  Both women were in a valley of darkness…heading toward death. The first explicitly entrusts herself to the Lord, and the Lord intervened. The second…knows she’s guilty. She’s ashamed in front of all the people…. The Gospel doesn’t say it, but surely she was praying inside, asking for some type of help.”

Both the men and the women receive the Lord’s intervention. He justifies Susanna and forgives the adulterous woman, the Pope said.

“The Lord responds to the women. He frees Susanna from the corrupt men… To the other, He says, ‘Neither do I condemn you. Go, and sin no more.’ “

In Susanna’s case, the Pope continued, the people praised God. Those present with Jesus and the woman caught in adultery “learn about God’s mercy”. These are lessons we all need to learn because “each one of us has our own story, our own personal sins”, the Pope said. If we don’t recognize our own sins, then “you are corrupt”, he said.

“Let’s look to the Lord, who does justice, but who is extremely merciful… May each one of us, seeing how Jesus acted in these cases, entrust ourselves to God’s mercy and pray, trusting in God’s mercy, asking forgiveness, because God ‘guides me along the right path. He is true to his name. If I should walk in the valley of darkness’ the valley of sin, ‘no evil would I fear. You are there with your crook and your staff; with these, you give me comfort.”