Pope at Mass: ‘You can’t buy the Lord’s gifts’

Pope at Mass: ‘You can’t buy the Lord’s gifts’ 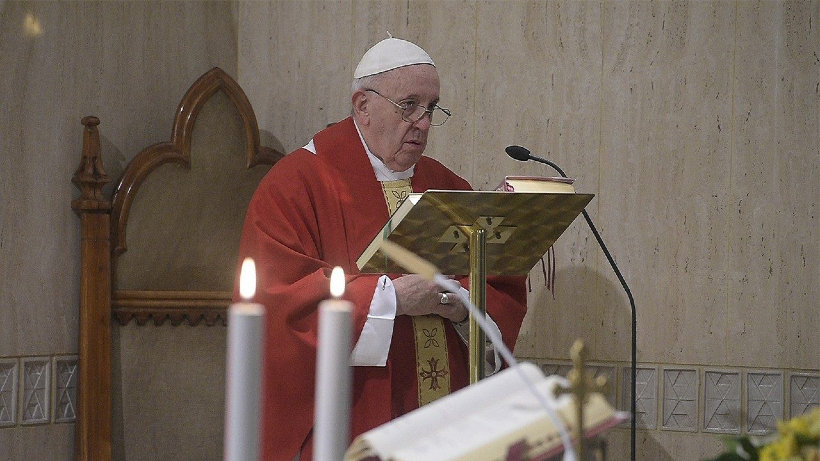 Pope Francis celebrates morning Mass at the Casa Santa Marta reminding believers that the Lord’s gifts are free and it is not Christian to seek favors in order to grow in ecclesiastical careers.

To be a Christian, a priest or a bishop is a free gift from the Lord, Pope Francis said during his homily, and holiness consists in “guarding” this gift which we received gratuitously, and not thanks to our own merits.

The Pope was reflecting on the Responsorial Psalm and from the First Reading of today’s liturgy.

He explained that the Psalm recalls the election of David as king of Israel after the Lord had rejected Saul for not obeying.

In the Reading, the Lord sends Samuel to anoint as king one of the sons of Jesse of  Bethlehem. The anointment, he said, indicates God’s choice, and today it is used today to consecrate priests and bishops.

Noting that we Christians are anointed with oil during Baptism, the Pope explained that God urges Samuel to look beyond appearances because, “it does not matter what man sees: in fact, man sees the appearance but the Lord sees the heart.”

The Pope recalled how David’s brothers fought against the Philistines to defend the kingdom of Israel saying “they had merits”, but he noted, God chose the last of them.

He described him as “a restless boy,” who grazed the flock and said the Scriptures tell us he was called David and was a handsome youth “making a splendid appearance.”  After the anointment, he continued,  “the Spirit of the Lord rushed upon David.”

The Lord’s gifts are free

Pope Francis said it is a story that prompts one to reflect and wonder why the Lord chose a “normal” boy, who perhaps sometimes behaved in a silly way as many youngsters do. He was not even a pious boy, “who prayed every day”, he said, and he had seven good brothers “who had more merits than him.”

And yet, the Pope pointed out, the smallest, “the most limited, the one who had no titles”, who had not fought the war, was the one to be chosen. This, he said, shows us “the gratuitousness of God’s choice.”

He invited those present to reflect on their own presence at Mass saying “why did the Lord choose us?” Not because, he comes from a Christian family or a Christian culture,” in fact, he said, many such people end up rejecting the Lord.

And highlighting the gratuitousness of God’s choice, the Pope spoke also of how priests and bishops have received their anointment for free.

“There are, yes, those who want to go ahead in the so-called ecclesiastical careers, who behave in a simoniacal way, seeking influences, becoming climbers,” he said, but he pointed out that that is not the Christian way.

“Being Christian, being baptized, being ordained priests and bishops is pure gratuitousness. You can’t buy the Lord’s gifts,” he said.

The Pope went on to speak about what we can do “to be holy” and said that Christian holiness is “to preserve the Lord’s gift, nothing more”, behaving in such a way that the Lord always remains with us.

He decried that attitude of some that aim to climb the ladder of a career in the Church and said that to be anointed a bishop is a gift.

He urged Christians to live with humility, thus guarding God’s gift of having chosen us. And he spoke of the great gift of the Holy Spirit saying: “When the Lord elected us, He gave us the Holy Spirit. And that’s pure grace.”

“If we priests forget our flock, if we bishops forget this and feel more important than others, we deny God’s gift, he said.

“It’s like telling the Holy Spirit we can manage on our own, (…) and that’s not Christian. That’s not guarding the gift.”

Let us ask the Lord today, he prayed, to give us the grace to give thanks for the great and beautiful gift He has given us, and to preserve it with faithfulness.