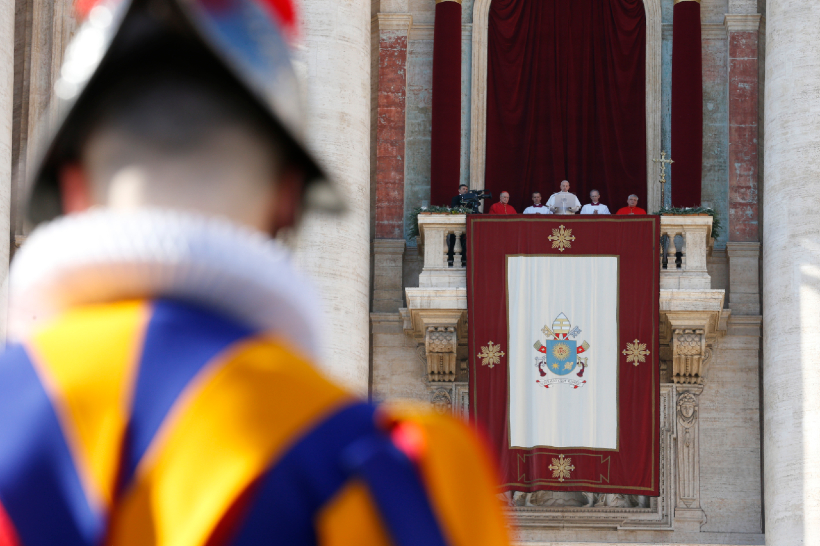 The theme of Pope Francis’ annual Christmas Day “Urbi et Orbi” Message is “The people who walked in darkness have seen a great light”.

Urbi et Orbi, means literally “to the city and to the world”, and as always, this year the Pope highlighted the plight of many suffering people and nations across the globe, praying for the peace of the Lord who has come to save us.

Referring to the theme of this year’s Message, he said that “There is darkness in human hearts, yet the light of Christ is greater still.”

In particular, the Pope turned his attention to the situation of “the many children suffering from war and conflicts in the Middle East and in various countries of the world.”

He prayed for comfort for “the beloved Syrian people who still see no end to the hostilities that have rent their country over the last decade,” and appealed to governments and to the international community “to find solutions to allow the peoples of that region to live together in peace and security, and put an end to their unspeakable sufferings.”

The Pope turned his thoughts to the people of Lebanon who are struggling to overcome “the current crisis and rediscover their vocation to be a message of freedom and harmonious coexistence for all.”

He mentioned the Holy Land, where he said, “so many people – struggling but not discouraged – still await a time of peace, security and prosperity,” and prayed that the Lord may bring consolation to Iraq “amid its present social tensions, and to Yemen, suffering from a grave humanitarian crisis.”

Looking further afar, Pope Francis asked that the “tiny Babe of Bethlehem bring hope to the whole American continent,” where he said, “a number of nations are experiencing a time of social and political upheaval.”

His thoughts went to “the beloved Venezuelan people, long tried by their political and social tensions,” praying that they may receive the aid they need.

“May he bless the efforts of those who spare no effort to promote justice and reconciliation and to overcome the various crises and the many forms of poverty that offend the dignity of each person,” he said.

The conflict-torn nation of Ukraine was also in Pope Francis’s thoughts who said: “May the Redeemer of the world bring light to beloved Ukraine, which yearns for concrete solutions for an enduring peace.”

And Africa was also in his heart, as he expressed closeness to its people who are often forced to migrate because of persistent unjust social and political situations.

“May the Son of God, come down to earth from heaven, protect and sustain all those who, due to these and other injustices, are forced to emigrate in the hope of a secure life.  It is injustice that makes them cross deserts and seas that become cemeteries.  It is injustice that forces them to endure unspeakable forms of abuse, enslavement of every kind and torture in inhumane detention camps.  It is injustice that turns them away from places where they might have hope for a dignified life, but instead find themselves before walls of indifference.

In particular he mentioned the eastern part of the Democratic Republic of the Congo, “torn by continuing conflicts.”

May the Redeemer, he said, “bring consolation to all who suffer because of violence, natural disasters or outbreaks of disease.  And may He bring comfort to those who are persecuted for their religious faith, especially missionaries and members of the faithful who have been kidnapped, and to the victims of attacks by extremist groups, particularly in Burkina Faso, Mali, Niger and Nigeria.”

May our hearts be softened

Finally, Pope Francis said, “May Emmanuel bring light to all the suffering members of our human family.  May he soften our often stony and self-centered hearts, and make them channels of his love.  May he bring his smile, through our poor faces, to all the children of the world: to those who are abandoned and those who suffer violence.”

Through our frail hands, the Pope concluded, “may He clothe those who have nothing to wear, give bread to the hungry and heal the sick.  Through our friendship, such as it is, may He draw close to the elderly and the lonely, to migrants and the marginalized. On this joyful Christmas Day, may He bring his tenderness to all and brighten the darkness of this world.”