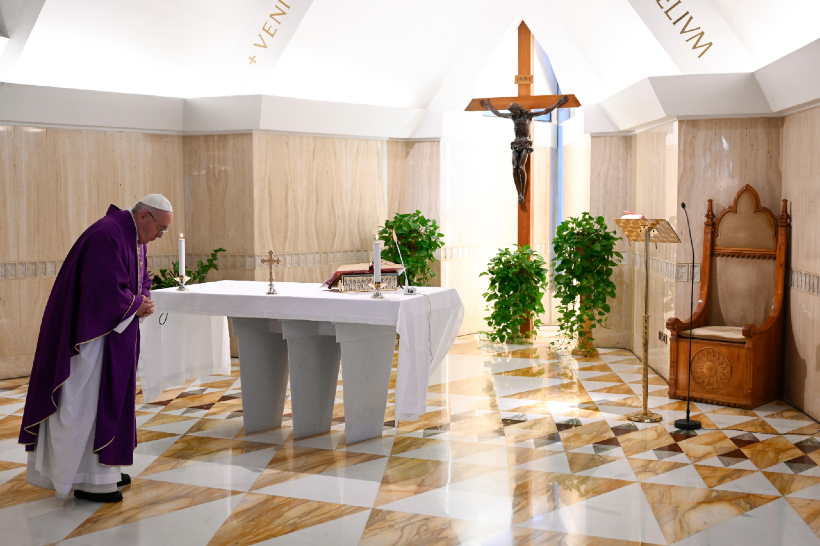 Once again, Pope Francis demonstrates his concern for families who are cooped up at home with their children, praying, “May the Lord help them discover new expressions of love”.

“I am thinking of families who are cooped up”, Pope Francis began the morning liturgy at the Casa Santa Marta on Monday morning. “May the Lord help them to discover new ways, new expressions of love, of living together in this new situation. It’s a beautiful opportunity to creatively rediscover affection…. Let’s pray for families so that the relationships within the family at this moment might flourish always for the good.”

Pope Francis reflected on the behavior of Naaman and the people in the synagogue of Nazareth during his homily inspired by the readings of Monday of the Third Week of Lent (2 Kings 5:1-15; Luke 4:24-30).

Pope Francis unpacked the indignation demonstrated in both of Monday’s readings. At first, the people in the synagogue like what Jesus says. But when they ask themselves “what university did he study at? This is Mary and Joseph’s son… He was a carpenter… What can He possibly have to say to us?” they become indignant to the point that they resort to physical violence. Naaman, too, becomes indignant when Elisha suggests that he bathe seven times in the Jordan River. His reaction leads him to resort to verbal violence. “Indignation always leads to violence”, Pope Francis said, “either physical or verbal”.

Both Naaman and the people of Nazareth were “good people”, Pope Francis said. “What’s behind these good people that leads them to react indignantly?” he asked.

He responded saying their idea of God was such that they thought He “manifested Himself only through the extraordinary, through things that are out of the ordinary, that God couldn’t act through the commonalities of life, in simplicity”.

The indignation manifested in both readings is a reaction against simplicity, Pope Francis continued.

“They despised the simple things. And our God makes us understand that He always acts through the simple things: the simplicity of the house of Nazareth…the simplicity of everyday work…the simplicity of prayer…simple things. Instead, the worldly spirit moves us toward vanity, toward appearances. Both end in violence. Naaman, who was very educated, slams the door in the prophet’s face and takes off – violence, a violent action. The people in the synagogue begin to get angrier and angrier. They make the decision to kill Jesus, however unconsciously. They drive him out to push him over the cliff.”

Proud people get indignant, but they are also poor in spirit, Pope Francis noted. “The proud live only with illusions of being more than they really are…. Many times these people need to become indignant to feel that they are someone”, the Pope explained.

Pope Francis concluded inviting us to think about “the indignation of the people in the synagogue of Nazareth and Namaan’s indignation” as a result of the fact that they “did not understand the simplicity of our God”.