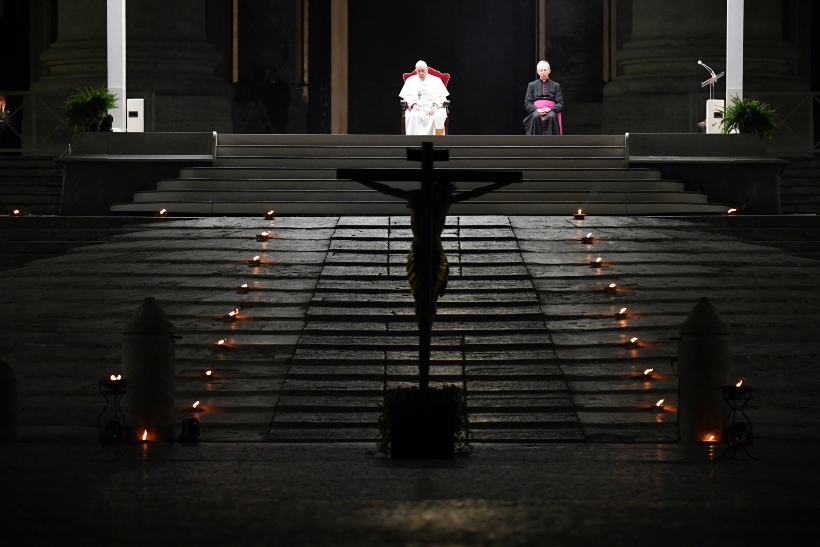 On Good Friday, Pope Francis presides at the Way of the Cross, which this year takes place in Piazza San Pietro.

Pope Francis led the traditional Via Crucis in a near-empty Saint Peter’s Square on the evening of Good Friday.

It marked a stark departure from the usual ceremony, which normally takes place at the Colosseum amid throngs of people as the Church remembers the final moments of the Passion, Death, and Burial of our Lord Jesus Christ. This year, measures taken to halt the spread of the novel coronavirus, Covid-19, made it necessary to hold the service without the physical presence of the faithful.

For 2020, the meditations for the fourteen “Stations” along the Way of the Cross were prepared by the chaplaincy of the Due Palazzi House of Detention in the northern Italian city of Padua. Five prisoners, the family of a murder victim, the daughter of a man given a life sentence, the mother of another prisoner, a guard, and a priest who was convicted of a crime but eventually exonerated, were among those contributing their reflections on the Passion of the Lord, and how it bears on their own situations.

A path through the darkness

With the path marked out by burning torches on the ground, the black Cross was carried around the obelisk at the center of the Square, before coming to the door of the Basilica. The Cross was escorted by members of the Due Palazzi chaplaincy, and by members of the Health and Hygiene Directorate of the Vatican City State.

Arriving at the sagrada, or porch before the façade, the Cross was given to Pope Francis for the fourteenth and final Station.

Finally, at the conclusion of the ceremony, the Holy Father gave his papal blessing to all those following the Via Crucis, wherever they might be throughout the world.