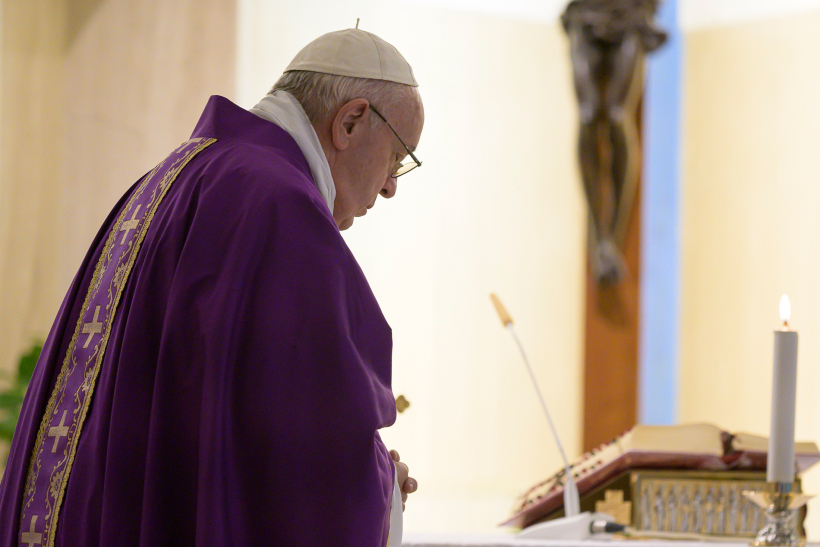 During Mass on Monday morning at the Casa Santa Marta, Pope Francis prays for families facing financial difficulties due to the coronavirus pandemic and says prayer requires faith, perseverance, and courage. (Playback of liturgy included)

“Let us pray today for those persons who are beginning to experience economic problems because of the pandemic because they cannot work.” This was Pope Francis’ prayer intention for the morning Mass he celebrated on Monday at the Casa Santa Marta. “All of this affects the family. We pray for those people who have this problem.”

During his homily, he spoke of the faith, perseverance, and courage necessary to pray well.

Unless you see signs…

Pope Francis reflected on the Gospel of the healing of the functionary’s son in Cana in Galilee (John 4:43-54). After asking Jesus to cure his son, “the Lord reproves him a bit – everyone – but him as well…. Instead of staying silent, the functionary continues, saying ‘Lord, come down before my child dies’ ”. He then receives the assurance from the Lord that his child would live, the Pope said.

“Many times prayer is only oral from the mouth…but it doesn’t come from the faith in the heart, or it’s a weak faith.”

The Pope then gave another example of the father whose child was possessed who asked the Lord to increase his faith, after Jesus tells him that everything is possible to those who have faith (Mark 9:23).

“Faith and prayer; to pray with faith….  I pray either with faith or out of habit. Let’s be attentive when we pray not to fall into a routine, without the awareness that the Lord is here, that I’m speaking with the Lord and He is able to resolve problems.”

The second requirement, the Pope said, is perseverance. Jesus himself teaches us this, he said.

He then cited the parables in which Jesus teaches us perseverance: the person who woke up his neighbor in the middle of the night for bread, and the widow before the unjust judge.

“Faith and perseverance go together because if you have faith you’re sure that the Lord will give you what you are asking. If the Lord makes you wait, knock and knock and knock. In the end, the Lord gives the grace.”

If the Lord makes us wait, the Pope said, He does so “for our good”. “He takes prayer seriously”, Pope Francis said.

God wants us to pray courageously. This is the third requirement, the Pope said.

“ ‘Is courage necessary to pray?’, someone might think. To remain before the Lord: yes, it’s necessary. It’s almost, almost,  I don’t want to say a heresy, but almost as if we’re threatening the Lord. Moses’s courage before God when God wanted to destroy the people…. Abraham’s courage when he negotiates the salvation of Sodom. ‘What if there are 30? What if there are 20?’ Courage. This virtue of courage is very much needed, not only for apostolic works but also for prayer.”

The Pope then concluded his homily reflecting on what we are all experiencing in these days.