Pope on Feast of Mary, Mother of God: The dignity and gifts of women

Pope on Feast of Mary, Mother of God: The dignity and gifts of women 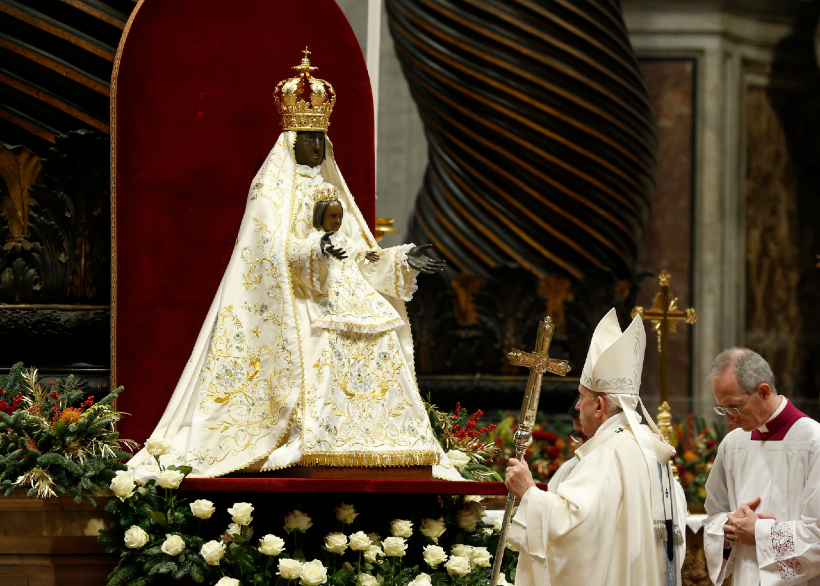 Pope Francis presides over Holy Mass in St Peter’s Basilica on the first day of the year, celebrating the Feast of Mary, Mother of God, and marking the 53rd World Day of Peace.

Pope Francis’ first homily of the year was dedicated to the figure of Mary, on the day the Church celebrates her as Mother of God. Mary was declared Mother of God at the Council of Ephesus in 431, and it was Pope Saint Paul VI who restored this solemnity to January 1st in 1974.

Women as sources of life

“On the first day of the year”, began Pope Francis, we celebrate a “nuptial union between God and humanity”, one that was inaugurated “in the womb of a woman”. “The rebirth of humanity began from a woman”, continued the Pope: “Women are sources of life”.

Born of a woman

That is why “every form of violence inflicted upon a woman is a blasphemy against God, who was born of a woman”, said Pope Francis. “How often are women’s bodies sacrificed on the profane altars of advertising, profiteering, and pornography, exploited like a canvas to be used”. “Women’s bodies must be freed from consumerism”, he said. “They must be respected and honoured”.

Keeping in her heart

Pope Francis noted how the Gospel repeats the image of Mary “keeping all things in her heart”. “Women typically take life to heart”, said the Pope. “Women show us that the meaning of life is not found in making things but in taking things to heart. Only those who see with the heart see things properly, because they know how to ‘look into’ each person”.

Seeing with the heart

At the start of this New Year, Pope Francis challenged us to ask if we know “how to see with the heart”. Only if we take life to heart, he said, “will we know how to take care and overcome the indifference all around”. “If we want a better world, a world that will be a peaceful home and not a war field, may we take to heart the dignity of each woman”.

Women as mediators of peace

The Church celebrates January 1st as the 53rd World Day of Peace, a tradition begun by Pope Saint Paul VI in 1968.

“Women are givers and mediators of peace”, said Pope Francis in his homily, adding that they should be “fully included in decision-making processes”. When women can share their gifts, said the Pope, “the world finds itself more united, more peaceful. Hence, every step forward for women is a step forward for humanity as a whole”.

Mary as woman and mother

It was Mary, said Pope Francis, who began “the revolution of tenderness” – something the Church is called to continue: “For she too, like Mary, is both woman and mother”. In drawing close to Mary, “the Church discovers herself, she finds her centre and her unity”, said the Pope, “Because the Church has a mother’s heart”.

Pope Francis concluded asking Mary “to give birth to hope within us and bring us unity.  Woman of salvation, to you we entrust this year”, said the Pope. “Keep it in your heart”.