Pope on Palm Sunday: love and service during Covid-19

Pope on Palm Sunday: love and service during Covid-19 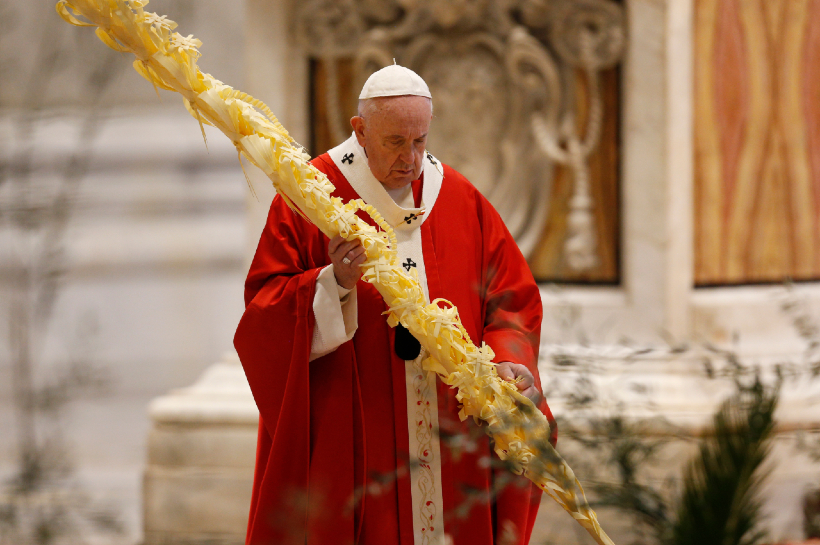 During Palm Sunday Mass in St Peter’s Basilica, celebrated with a limited congregation due to the Coronavirus pandemic, Pope Francis dedicates his homily to the theme of service. (Playback included)

For the first time in history, Pope Francis celebrated Palm Sunday Mass alone in St Peter’s Basilica. Out of respect for Covid-19 regulations limiting large gatherings, the Mass was held without a congregation. Millions of people joined the Holy Father, however, via the internet, radio and television.

The Pope based his homily on St Paul’s Letter to the Philippians, where the Apostle describes Jesus as emptying Himself and “taking the form of a servant” (Phil 2:7).

“Let us allow these words of the Apostle Paul to lead us into these holy days”, said Pope Francis, “when the Word of God, like a refrain, presents Jesus as servant”.

“We often think we are the ones who serve God”, began the Pope. Instead, “He is the one who freely chose to serve us, for He loved us first.

The Lord served us by giving His life for us, continued Pope Francis. He did this “with the humility, patience and obedience of a servant, and purely out of love”.

“The Lord served us to the point of experiencing the most painful situations of those who love: betrayal and abandonment”, he added.

We have all suffered betrayals in life, the Pope acknowledged. Betrayal risks provoking disappointment “that can even make life seem meaningless”, he added, because “we were born to be loved and to love”.

“If we are honest with ourselves, we will see our infidelities”, continued Pope Francis: the   “falsehoods, hypocrisies and duplicities”. The Lord knows “how weak and irresolute we are, how many times we fall, how hard it is for us to get up, and how difficult it is to heal certain wounds”, he said.

Despite all that, Jesus still comes to our aid. He serves us and heals us “by taking upon Himself our infidelity”, explained the Pope. “Instead of being discouraged by the fear of failing, we can now look upon the crucifix, feel His embrace”, and say: “You serve me with your love, you continue to support me… And so I will keep pressing on”.

Turning to the Gospel for Palm Sunday, Pope Francis noted Jesus’ words from the Cross: “My God, my God, why have you forsaken me?” (Mt 27:46). Everyone had fled, “but the Father remained for Him”, said the Pope. These words tell us that Jesus Himself experienced desolation and utmost abandonment.

All of this took place “for our sake, to serve us”, continued the Pope. “Jesus did it for me, for you, to say to us: ‘I experienced all your desolation in order to be ever close to you’”.

“Today, in the tragedy of a pandemic, in the face of the many false securities that have now crumbled, in the face of so many hopes betrayed, in the sense of abandonment that weighs upon our hearts, Jesus says to each one of us: ‘Courage, open your heart to my love. You will feel the consolation of God who sustains you’”.

“The tragedy we are experiencing summons us to take seriously the things that are serious, and not to be caught up in those that matter less”, Pope Francis suggested.

During these holy days, “may we reach out to those who are suffering and those most in need. May we not be concerned about what we lack, but what good we can do for others”, said the Pope.

“Loving, praying, forgiving, caring for others, in the family and in society” can be difficult, admitted Pope Francis. “But the path of service is the victorious and lifegiving path by which we were saved”.

The Pope then addressed young people, “on this Day which has been dedicated to them for thirty-five years now”. He invited them to consider what he called “real heroes”: not famous, rich and successful people, but “those who are giving themselves in order to serve others”. His final words were for them:

“Feel called yourselves to put your lives on the line. Do not be afraid to devote your life to God and to others; it pays!  For life is a gift we receive only when we give ourselves away, and our deepest joy comes from saying ‘yes’ to love, without ifs and buts.  As Jesus did for us.