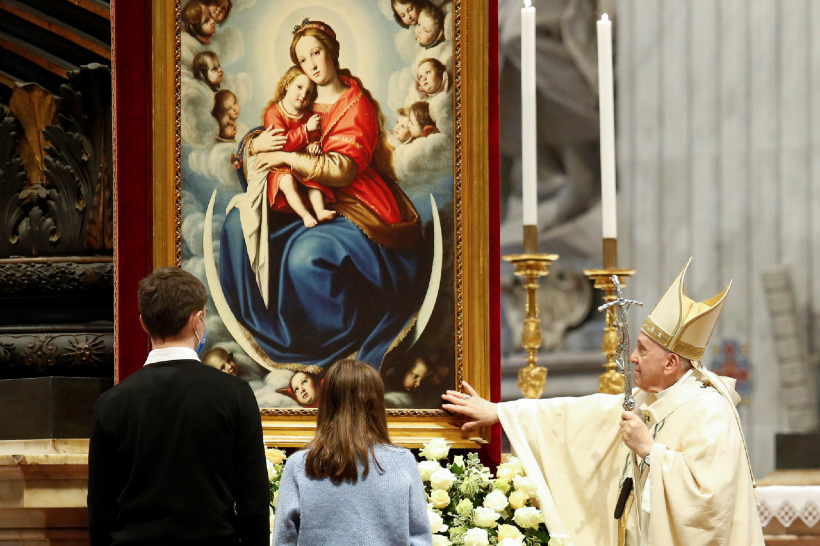 Pope Francis reflects on the Kingship of Christ on today’s Solemnity of Christ the King, noting that Jesus came not to dominate, but to serve others. And Christians are called to do the same, seeking the truth of Jesus’ boundless love who frees us from our weaknesses.

Pope Francis appeared at the window overlooking Saint Peter’s Square for the Sunday Angelus with two young people from the Diocese of Rome participating in the World Youth Day celebrations. Earlier Sunday morning the Pope presided over the World Youth Day Mass in the Basilica.

Reflecting on the readings for today’s Solemnity of Christ the King, Pope Francis pointed out how Jesus said clearly during Pilate’s interrogation, “I am a king”, where previously we read in the Gospels how he did want others to acclaim him as their king. The reason is the understanding of “kingship” according to worldy standards is very different from what He intended. Jesus came into the world, not to dominate, “but to serve”, the Pope, noted, and he did this not through “signs of power”, but rather, through the “power of signs”. His kingship signified service to the point of being nailed on a cross, something “truly beyond human parameters” that regard a king as manifesting pride, fame, glory and power over others.

Jesus as King for all

The Pope observed that Christ says he is a king when the crowds chanted against him, but when the crowds acclaimed him previously, he kept his distance. This shows that Jesus is “sovereignly free” from the earthly desire for regal fame and glory, he noted, something that all Christians need to ask themselves if they too are imitating this mission of service to others, rather than seeking approval, esteem and applause.

While Jesus fled earthly greatness, he “makes the hearts of those who follow him free and sovereign,” the Pope pointed out, saying Jesus frees us from the slavery of sin. “His Kingdom is liberating,” where every disciple is treated like a friend and not a subject, he added, even though He is above all sovereigns. The Pope empahsized that “we acquire dignity” by following Christ, who wants us all to be free.

Bearing witness to the truth

The Pope explained the Jesus’ freedom derives from the truth, the reality that Jesus made “the truth within us that frees us” from the falsity we have inside. When Jesus reigns in our heart, we are freed from hypocrisy, deceit and duplicity, the Pope said, since “being with Jesus, we become true”. At the same time, we must always must deal with our limitations and weaknesses, but when we live under the lordship of Jesus, we can avoid becoming corrupt or duplicitious. In conclusion, that Pope prayed that Mary might help us seek every day “the truth of Jesus, King of the Universe” who frees us from the earthly slavery to sin and leads us to discipline in our lives.