Pope to Ecumenical Delegation: We are called on to distinguish, discern and sift

Pope to Ecumenical Delegation: We are called on to distinguish, discern and sift 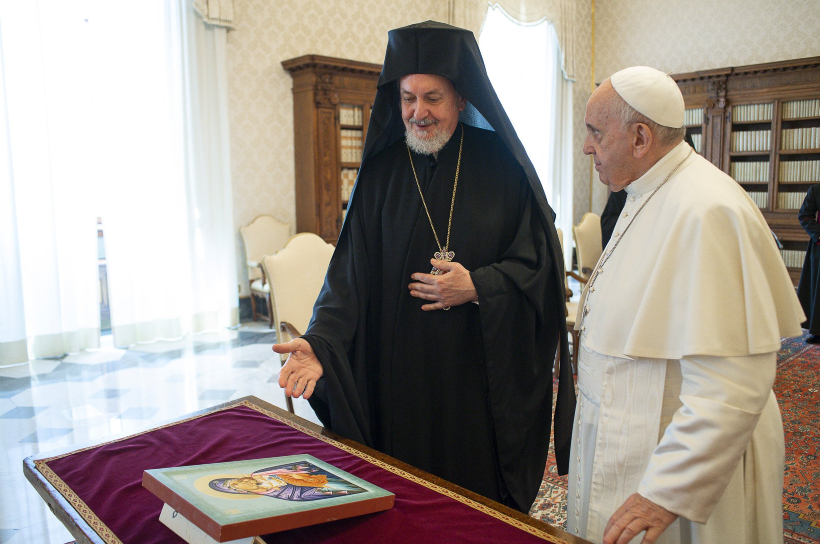 Pope Francis meets with a delegation of the Ecumenical Patriarch of Constantinople Bartholomew and speaks of the importance of Christian communion as an example as we seek global communion after the pandemic.

Addressing the delegation of the Ecumenical Patriarchate of Constantinople in the Vatican on Monday, Pope Francis noted that “this annual exchange of delegations between the Church of Rome and that of Constantinople” for the feasts of Saints Peter and Paul, “is a sign of the communion – real, albeit not yet full – which we already share”.

Celebrating in a time of crisis

This year, the Pope notes, the celebration of our respective saints comes “in a world still struggling to emerge from the dramatic crisis caused by the pandemic”.  The Pope noted that there is only one thing more serious than this crisis, “and that is the risk that we will squander it, and not learn the lesson it teaches”.  This is a lesson in humility, continued the Pope, which shows us that “it is not possible to live healthy lives in an unhealthy world, or to go on as we were, without recognizing what went wrong”.

The message to Christians

The Pope then went on to ask what this means for Christians. “We too are called to reflect seriously on whether we want to go back to doing what we did before” said the Pope. Should we act as if nothing happened, or “take up the challenge of the crisis” he asked. Crisis, as the original meaning of the word shows, always implies a judgement, a distinction between good and bad. “The present crisis calls us to distinguish, discern and sift, in everything we do, between what is enduring and what is passing”, said the Pope.

For us Christians on the path to full communion, means “asking ourselves how we wish to move forward”, noted the Pope. He explained that every crisis represents a crossroad at which we can either “withdraw into ourselves, seeking our own security and expediency”, or at which “we can be open to others, which entails risks but also God’s promised fruits of grace. “Without ignoring the differences that need to be resolved through charitable and truthful dialogue, could we not begin a new phase of relations between our Churches, marked by walking more closely together, by desiring to take real steps forward, by becoming more willing to be truly responsible for one another?”, asked the Pope. He explained that “if we are docile to love, to the Holy Spirit who is the creative love of God and who brings harmony to diversity, he will open the way to a renewed fraternity”.

Bringing his address to a close, the Pope noted that “the witness of growing communion between us Christians will also be a sign of hope for many men and women, who will feel encouraged to promote a more universal fraternity and a reconciliation capable of healing past wrongs”.  This, he stressed, is the only way to the dawn of a future of peace.

Finally, Pope Francis thanked all those present and asked that they convey to His Holiness Bartholomew, who was unable to travel to Rome, his cordial and respectful greetings: “Through the intercession of Saints Peter and Paul, Princes of the Apostles, and of Saint Andrew, the First-Called, may Almighty God in his mercy bless us and draw us ever closer to his own unity”.

A communiqué by the Holy See Press Office explained that in accordance with the traditional exchange of delegations between Rome and Istanbul, the delegation of the Ecumenical Patriarchate led by Metropolitan Emmanuel of Chalcedon arrived in Rome on Sunday. It noted that he is accompanied by Bishop Iosif, the Greek Orthodox Metropolitan of Buenos Aires, and by  Deacon Barnabas Grigoriadis.

The communiqué added that the delegation was received in audience by the Holy Father and, subsequently, met with the Pontifical Council for the Promotion of Christian Unity. Tomorrow,  Tuesday, 29 June, it will attend the Solemn Eucharistic Celebration presided over by Pope Francis in St. Peter’s Basilica.