All of Pope Francis’ Interviews in One Book, from the Vatican Press

All of Pope Francis’ Interviews in One Book, from the Vatican Press 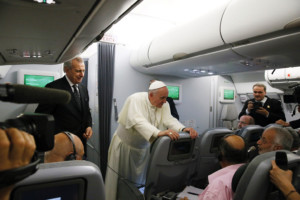 July 28, 2013, flight from Rio de Janeiro (Brazil) to Rome. This was the first apostolic journey of Pope Francis, to the 28th World Youth Day. To the surprise of those traveling with the Pope, during his return journey, he agreed to answer journalists’ questions for more than an hour despite being very tired. This became the first great interview of the pontificate.

“Interviews and Conversations with Journalists” (Interviste e conversazioni con i giornalisti) is a new book from the Vatican Publishing House that gathers together all the interviews given by Pope Francis so far, from his meeting with journalists en route to Rio de Janeiro on July 22, 2013, to his return flight from Seoul on August 18, 2014. The book is edited by Father Giuseppe Costa, head of the Vatican publishing house, professor of journalism and publishing at the Pontifical Salesian University and consultant for the Pontifical Council for Social Communication.

The book comprises a total of 14 interviews, both those based on dialogues with journalists on board flights during apostolic visits, and those held with individual journalists from Italian and international newspapers. It is enhanced by two photo insert sections, capturing moments of the Pope’s interviews with the press.

Father Costa mentions that “ever since Alberto Cavallari interviewed Paul VI (today Blessed Paul VI) for the Italian national daily Corriere della Sera, 50 years ago, journalists’ aspiration to ‘find out’ a Pope’s opinion has grown and expanded, as has the ever-increasing number of interviews with bishops and cardinals. (…) And as the number of papal trips has multiplied, we have seen the rise of a sort of collective interview, facilitated also by the fact that quite a number of accredited journalists travel on the same flight as the Pope.” Father Costa added that “with the advent of Pope Francis, journalists (and others) immediately realized that this could be the form of interaction with mass media most especially suited to him.”

“These interviews, as a whole,” Costa said, “reveal the wealth behind Pope Francis’ message: his attention towards children, young people and the elderly; God’s mercy and tenderness; his passion for people; his emphasis on encounter and inter-religious dialogue. They reveal his great attachment to Paul VI, as well as the ability to encounter God in daily life through simple and spontan­eous prayer, as well as his desire to appear as, and to be, a real person. As the Pope said to Ferruccio de Bortoli, editor-in-chief of Corriere della Sera, ‘To paint the Pope as a sort of Superman, a kind of star, seems to me to be offensive. The Pope is a man who laughs, cries, is at peace with the world, and has friends like everybody else. A normal person!’”

A Pope Francis Book for the Catholic New Year

For Catholics a new year begins on November 30, the first Sunday of Advent.

Our new book, Pope Francis: A Guide to God’s Time, explains the Church’s liturgical year using the Pope’s homilies. The book is published by Catholic News Service/U.S. Conference of Catholic Bishops and the Libreria Editrice Vaticana (the Vatican publishing house). You can order it directly from the bishops’ publishing office or on Amazon. 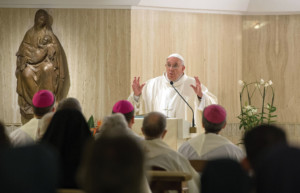 As a journalist, I read Pope Francis’ morning homilies and Sunday Angelus addresses looking for “news.” Usually with Pope Francis that means finding odd, interesting and colorful turns of phrase.

“God spray” and “bat Christians” come to mind. In the first instance, the Pope said God is a real being capable of and desiring a relationship with each person; he’s not some kind of esoteric mist or “god spray.” The second phrase comes from a homily about lukewarm Christians who seem to prefer to dwell in a dark cave like bats rather than walk in the light.

Last spring I went back over the homilies Pope Francis delivered in the first 14 months of his pontificate. This time I was not looking for news, but for his explanations of how the Catholic Church divides up its calendar into seasons, special times of preparation and special times of celebration: the liturgical year.

The result is this book, which is illustrated with 91 beautiful photographs taken by my Rome colleague Paul Haring. (Reviewing the pages before publication, my attention always strayed to the photos. I can’t pick a favorite, but the one below definitely makes me smile every time I see it.)

The title comes from one of Pope Francis’ homilies. The Pope is someone who is constantly looking at his watch because he sees a careful management of his time as a spiritual discipline and as sign of respect for the people he is supposed to meet at a certain hour. But in the homily that inspired the title, he said that when we go to Mass, we enter into God’s time “without looking at our watches.”

In the chapel of the Domus Sanctae Marthae where he lives, Pope Francis celebrates a morning Mass and gives a homily almost every Monday, Tuesday, Thursday and Friday (Wednesdays he has his General Audiences). He recites the Angelus or Regina Coeli on Sundays and major feast days — and uses those occasions for a commentary on the Mass readings. Then there are the Masses — with a homily — for Christmas, Ash Wednesday, Holy Week and Easter, the proclamation of saints, and other special events.

“Pope Francis: A Guide to God’s Time” mines all those homilies and commentaries to find Pope Francis’ secrets to prayer, happiness and holiness. The book also provides many quotes from Pope Francis on the Eucharist, peace, mercy, forgiveness and, of course, on the evils of gossip, which he has started referring to as a form of “terrorism.”

In the United States, the book is available in English and in Spanish. In Rome, it’s also available in Italian.