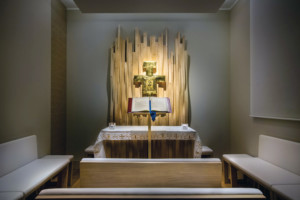 Opened on October 4, 2012 “Il Cantico” (www.ilcantico.it) is probably the newest hotel in the area on the via Gregorio VII-Trastevere side of St. Peter’s Basilica. Located on a quiet residential side street at Via del Cottolegno 50, it’s five city blocks from “La Vittoria” and St. Peter’s Square — a 10-minute walk or three stops from the Square on any of these buses: 98, 881, 46B, 571, 916 and 982.

A favorite with Trafalgar Tours and host to Inside the Vatican’s Easter 2013 pilgrimage, before a recent transformation reasonably priced (depending on the season), “Il Cantico” once housed an orphanage. With its black-and-white and beige décor, “Il Cantico” looks like other comfortable 4-star accommodations, but it’s unique in spirit because it belongs to the Frati Francescani Minori (www.ofm.org), whose motherhouse is on the hilltop directly above at Via Santa Maria Mediatrice 25. “Any profit we make,” Brother Giancarlo Lati, the Order’s and hotel’s business manager, told me, “goes to our missions in over 100 countries. We try to spend our guests’ money wisely and make sure that it’s socially useful to that part of humanity that suffers. We run leprosy, AIDS centers and soup kitchens and are dedicated to eradicating poverty. Our newly-elected Minister General is an American, Brother Michael Anthony Perry.”

Born in Indianapolis, Brother Michael is the third American to serve as Vicar of St. Francis. His two American predecessors were Valentine Schaff of the St. John the Baptist Province (1945-6) and John Vaughn of the Santa Barbara Province (1979-1991). Brother Michael’s election as Minister General last May was unprecedented. In April, Pope Francis had appointed his friend, the Spanish former General Minister, José Rodríguez Carballo, Secretary of the Congregation for Institutes of Consecrated Life and Societies of Apostolic Life with two years remaining in his term, so an immediate replacement was called for.

“Il Cantico”’s 71 rooms, if a bit small, all have a safe, mini-bar TV, air-conditioning, 4-way LED lighting, exclusive “Linea Terre” bath accessories, and special wall soundproof cladding which is decorated with verses of the Canticle of the Sun.

St. Francis composed this religious song during the spring of 1225, when he was sick at San Damiano and was being cared for by Clare and the Poor Sisters. Written in the Umbrian dialect, it’s believed to be among the first works of literature, if not the very first, written in Italian.

The Canticle contains three sections: a praise of God for the creatures (sun, moon, stars, wind, water, fire, and earth), a praise for those who forgive for the love of God, and a praise for sister bodily death. In actual fact, only the first section was written at San Damiano; the section on forgiveness was written in the episcopal palace in Assisi where Francis resided for some weeks in September 1226, and the section on sister death at the Portincula, a short time before Francis died on October 3, 1226.

“According to tradition,” Wikipedia tells us, “the first time the canticle was sung in its entirety was by Francis and Brothers Angelo and Leo, two of his original companions, on Francis’ deathbed, the final verse ‘Sister Death’ having been added only a few minutes before.”

The guests of “Il Cantico” guests can also enjoy free Wi-Fi in their rooms (though reviews on TripAdvisor report that Wi-Fi only functions in the public spaces) and free parking in a covered 60-space car park. Many of the rooms have splendid views of St. Peter’s dome, as does a 80-seat roof garden, and the small chapel open 24-hours for prayer. 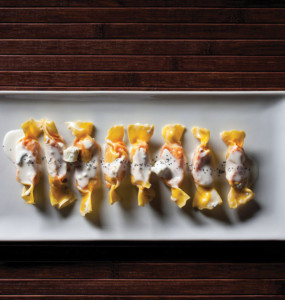 Other amenities include an over 200,000-square foot park with a unique herb garden and woods for long walks and quiet meditation, and a store with a generous selection of Dammann teas (it is possible to sniff and sample before purchase) as well as the finest Italian organic food products including Trappist jams and relishes, artisan pasta, and a “il liquore del pastore” produced by Emilio Borsi in Livorno (Leghorn). Also on sale are artisan chocolates, biscuits, cosmetics, ceramics and jewelry from Assisi.

Speaking of food, the pasta and ice cream (the most popular flavors being pistacchio and “crema del pastore”) are homemade. “Our house specialty,” 34-year-old Rome-born-and-trained Executive Chef Daniele Pavarini told me, “is ‘caramelle di pasta’ (hard-candy-shaped pasta) filled with mozzarella and red beet purée with a Gorgonzola and poppy-seed sauce.”